What Is America's Interest in the Ukraine War? 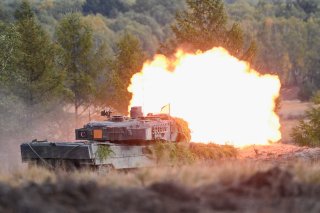 RUSSIA’S INVASION of Ukraine in February 2022 has produced an outpouring of international support for Kyiv. The United States has led these efforts. Even before Russian forces surged across the border, the United States and many of its allies signaled their opposition to Moscow’s predatory ambitions by warning of a range of potential sanctions Russia would incur, working to mobilize a potential diplomatic coalition against Moscow, and bolstering Ukraine’s military forces. Since the invasion, the United States has taken the lead in providing Ukraine with military equipment and training, economic aid, a near-blank check of diplomatic support, intelligence of use for stymying Russia’s offensive, and threatening draconian consequences should Russia use nuclear weapons in its campaign. Increasingly fervent bipartisan calls to penalize Russia, Ukraine’s lobbying efforts for additional aid, mounting calls from many think tankers and pundits to do more on Kyiv’s behalf, and the Biden administration’s gradual increase in support for Kyiv since February all suggest the American commitment may only grow in the future.

Nevertheless, the Biden administration and other proponents of current U.S. policy have so far failed to offer a strategic argument on behalf of the costs and risks that current U.S. policy incurs in the Russia-Ukraine War. To be sure, many have defined specific objectives vis-à-vis Ukraine itself. Still, definition and discussion of how U.S. efforts in Ukraine contribute to overarching U.S. national objectives and interests are broadly lacking, reduced primarily to gesticulations toward broad principles that might justify the American response in Ukraine so far. Amid the continuing war and ongoing calls for the United States to “do more,” the question remains: what, if any, are the United States’ strategic interests in Ukraine—and how might the United States best service them?

ALTHOUGH OFTEN lost amid the rush of events, policymakers and pundits have been quick to imply an abiding American interest in Ukraine. Without fully elaborating on the argument or issues at hand, these claims broadly fall into two camps.

One line holds that the United States cannot tolerate Russian aggression in Ukraine because it will only encourage further aggrandizement and expanding threats to the United States. This claim comes in two forms. The narrow version holds that the danger of future aggression is from Russia specifically—that is, if Russia goes unchallenged in Ukraine, then Moscow will simply expand its ambitions, challenge the United States’ North Atlantic Treaty Organization (NATO) allies, and ultimately threaten European security writ large. Along these lines, former ambassador to Russia Michael McFaul argues that “we have a security interest in [helping Ukraine defeat Russia]. Let’s just put it very simply: if Putin wins in Donbas and is encouraged to go further into Ukraine, that will be threatening to our NATO allies.” Likewise, former National Security Advisor Stephen Hadley asserts that the United States has an abiding concern in deterring Russian president Vladimir Putin “from thinking he can in the next five or ten years repeat this performance.” This particular concern helps explain why at least some in the Biden administration call for “weaken[ing] Russia” by bleeding it in Ukraine: as a National Security Council spokesperson put it, “one of our goals has been to limit Russia’s ability to do something like this again” by undercutting “Russia’s economic and military power to threaten and attack its neighbors.”

The broad version links the Ukraine War not to Russia per se but to potential aggrandizement by other actors, especially China. President Joe Biden himself advanced a version of this argument, writing in March that, “If Russia does not pay a heavy price for its actions, it will send a message to other would-be aggressors that they too can seize territory and subjugate other countries”; elsewhere, he asserts that “Throughout our history, we’ve learned that when dictators do not pay the price for their aggression, they cause more chaos and engage in more aggression.” Nor is this concern Biden’s alone: suggesting its bipartisan appeal, Representative Michael McCaul of Texas offers that failing to act in Ukraine would “embolden Vladimir Putin and his fellow autocrats by demonstrating the United States will surrender in the face of saber-rattling,” concluding that “U.S. credibility from Kyiv to Taipei cannot withstand another blow of this nature.”

Distinct from concerns with future aggrandizement, a second set of arguments holds that the United States has an abiding interest in Ukraine because it affects the so-called “liberal international order.” As Secretary of State Antony Blinken asserts, “the international rules-based order that’s critical to maintaining peace and security is being put to the test by Russia’s unprovoked and unjustified invasion of Ukraine.” The logic here looks to be two-fold. First, failing to back Ukraine would call into question American support for democracies worldwide, thereby undermining the viability of democracy as a way of organizing any society’s political life. As Biden explained, Ukraine was part and parcel of an ongoing “battle between democracy and autocracy, between liberty and repression”; by implication, not aiding Ukraine would set the United States back in this contest. Second, Russian aggrandizement is itself a challenge to key principles—mostly unspecified, but seemingly notions that powerful states should not use force to impose their will on weaker actors and that violations of state sovereignty should not be tolerated—upon which the liberal order supposedly rests. To ignore Russian aggression would call into question the future operation of the U.S.-backed system. As Anne Applebaum argues, the United States must be invested in the conflict since

Put simply, inaction risks empowering alternate principles upon which international order would rest and which, presumably, would harm the United States.

DISTURBINGLY, HOWEVER, these claims have gone broadly unremarked. Again, the United States has run real risks—most dramatically, possible military escalation and thus a nuclear exchange with Russia—and borne real costs—including aid equivalent to the budgets of the U.S. Transportation, Labor, and Commerce Departments combined—for the sake of helping Ukraine. Many analysts claim that the escalation risks involved are lower than one might think as, for instance, Russia would not be so suicidal as to risk war with the United States and its allies. Still, billions of dollars remain at stake at a time of rising domestic resource demands, and the fact that policymakers and analysts are debating how threatening American responses are likely to be viewed in Moscow suggests the risks being run are not negligible. It may be impolitic, but sound statecraft means we ought to ask whether the game is worth the candle.

The truth is that none of the avowed U.S. interests in Ukraine stand up to scrutiny. As importantly, believing they are U.S. interests contradicts core tenets of long-established U.S. grand strategy; making policy based on such concerns risks creating further strategic dilemmas for the United States, Ukraine, and Russia in ways that may only worsen the consequences of the present conflict.

Further Aggrandizement: An Overstated Worry. Worry that failure to act in Ukraine will simply whet Russia’s appetite for European aggression beyond Ukraine—particularly against the United States’ NATO allies—and thus merits a deepening American response is questionable. To be sure, some states at some times are dominated by domestic elites convinced that aggression is cheap, easy, and worthwhile. Still, to argue that unchallenged Russian behavior in Ukraine will yield further Russian aggrandizement is to argue that there are no other possible constraints that can keep Russian ambitions or behavior in check. Common sense, international relations theory, and current trends in European security all indicate otherwise.

States faced with a proximate and militarily ambitious actor tend to balance and check its opportunities for further aggression. In an anarchic world, this sort of behavior reflects the fact that self-interested states have to ensure their own security and so are incentivized to offset potential aggressors. We see these trends in Europe today, where Russia’s actions have rapidly spurred both arming (e.g., Germany’s growing defense budget) and allying (e.g., Sweden and Finland joining NATO, discussion of European military autonomy). Moreover, the distribution of power in Europe—where the European members of NATO alone have a combined gross domestic product twelve times that of Russia—underlines that there are multiple states which, singly or collectively, are more than capable of influencing Russian calculations. Russia, in short, is increasingly hemmed in and is likely to be further constrained should it contemplate future aggression in Europe.

Even a leader as daring as Putin cannot easily ignore this situation and is likely to factor it in to Russian strategic choices. Yet even if he—or a successor—were to overlook these constraints, the beauty of balancing is that aggressors nevertheless encounter resistance that thwarts their efforts. Put differently, even a reckless Russia that somehow concludes aggression after Ukraine is viable is unlikely to get very far.