What America's Next President Needs to Know about Africa 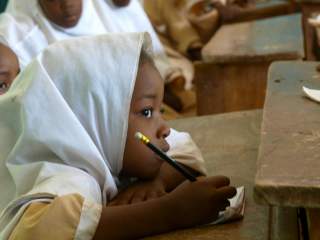 Unfortunately, the “Africa Rising” narrative is starting to unravel. Having lived in Africa from 2005–15, I can report that the “good news” story was too simplistic. The story of Africa nowadays is anything but. Today, we clearly see that the bumps in the road including stagnating economies, electoral violence and expanding extremist groups. Africa needs improved continued assistance at this crucial point in their development, and the next U.S. president should be there to make sure the continent reaches its true potential.

President Obama started a whole range of new African programs in addition to those of George W. Bush. The list is long—really long. To name a few: Power Africa, the Young African Leaders Initiative, the U.S.-Africa Leaders Summit, Feed the Future, the African Peacekeeping Rapid Response Partnership and the Security Governance Initiative. Some are run by the State Department, some by the Department of Defense, others by USAID or the Department of Commerce. Some work with the African Union (AU), others with the private sector.

The point I’m making is that a strong foundation for the new U.S. president to work with already exists. However, it appears that U.S. security and development engagement in Africa lacks coordination, and consists of a whole range of programs with unknown success rates. This is a complex issue, especially with different budgets controlled by different agencies. Some programs have limited personnel. There is an inability to transfer funds. Different committees have oversight. It’s a big hairy beast, and something that requires attention by the new administration, as well as the legislative branch.

These new African programs rightfully aim for the long term and, to be fair, will take time to start. However, a clearer picture has to emerge over the next few years, showing whether the programs’ goals and objectives are being met. Moreover, these ambitions should be closely aligned with the United Nations’ 2030 Agenda, as well as the AU’s 2063 Agenda, where possible.

One of the biggest challenges for all involved is finding the resources. Getting money for prevention is no easy task compared to funding a response. “Preventive work is probably the hardest” to find resources for, according to Sarah Sewall, under secretary for civilian security at the State Department. The State Department recently launched a pilot program to prevent the growth of terrorism—set to complement the ongoing U.S. counterterrorism efforts in Africa, both totaling around $200 million a year.

2. Continue to support the AU and African militaries with long-term capacity building, including more intelligence gathering.

Africa needs to be secure and stable for the other development initiatives to take hold. Foreign countries and media love to cast a negative light on America’s militarization of the continent, but a properly functioning and respected security sector and rule of law (military, law-enforcement and judicial) is paramount to Africa’s development. The United States assists Africa in too many ways to list. Threat Reduction in Africa (TRIA) is one such program that discusses Africa’s existing capabilities, noteworthy gaps and future plans regarding border security and other issues. TRIA specifically holds education, networking and training workshops like ones recently held in Kenya. These are often a rare opportunity for African countries to meet their domestic counterparts in other agencies, assess overall capabilities, and identify areas of mutual interest.

There are other U.S.-led regional programs, like the Trans-Sahara Counterterrorism Partnership, that have some overlap, as well as U.S.-assisted joint regional programs. The Global Counterterrorism Forum is an informal, multilateral platform that promotes a strategic, long-term approach to countering terrorism and violent extremist ideologies. Under this umbrella also fall the Capacity Building Working Groups for the Horn of Africa and the Sahel, each having its own regional specific objectives. Another entity is the African Centre for the Study and Research on Terrorism (ACSRT) in Algiers, a structure of the AU Commission.

Many African nations are starting to cooperate in countering cross-border terrorist or criminal threats through sharing intelligence. Kenya’s common intelligence center in Nairobi is used for joint training on investigation skills and others. A more recent regional intelligence center, similar to Kenya’s, was established in Kampala, Uganda, which is supported by the AU and seeks to prevent possible attacks by terrorist groups. Following the May 2014 summit on terrorism, Nigeria, Benin, Cameroon, Chad and Niger, with the help of the United States, the UK and France, set up the External Intelligence Response Unit on Terrorism to move towards increased intelligence coordination in matters of security and conflict. It hasn’t always been smooth sailing, with problems like lack of trust between countries, but these entities are a vast improvement compared to the state of affairs just a few short years ago.

The United States does not currently have bilateral intelligence-sharing agreements with all African countries. Full intelligence-sharing agreements, like the U.S.-Israel cyber defense and intelligence agreement signed in June 2016, allowing intelligence information to shared automatically, are quite rare. An example of high-level U.S.-Africa cooperation is the United States and Senegal establishing the first-ever Combined/Joint Intelligence Fusion Cell in Africa and signing a Defense Cooperation Agreement, the first such pact in a decade with an African nation. Partial agreements, like the U.S.-Nigerian document in 2014 where the U.S. military would share some intelligence—including aerial imagery—with Nigeria, but not all raw U.S. intelligence, are more common.

America should continue carrying out joint training exercises and expanding its network of small bases across East, North and West Africa. The United States is an expert in signals intelligence, with operations all over the continent. These activities combined are crucial in providing intelligence and operational support. Other recommendations can be put forth to African countries, like America helping to fund a continent-wide intelligence organization, under the AU, perhaps utilizing the current ACSRT, to provide items like daily briefs to intelligence chiefs in all the African states.

Continental and regional support is important, but the United States should not forget other individual economic and political national interests. Washington can do this better by expanding its formal strategic partnerships beyond Angola, Nigeria, South Africa and the AU Commission. Increased dialogue will allow relationships to evolve into a true partnership rather than a simple donor–recipient one. A frequent criticism I heard during my ten years in Africa was America is a fair-weather friend. America causes trouble, throws money at a problem, leaves and comes back. In Africans’ mind, you just never know when it comes to Washington. Moreover, to many Africans, countering al-Shabaab, Islamic State or AQIM is a lower priority than for Americans. They are more worried about weather patterns so that their crops can grow, or if they can see a doctor to get their antiretroviral drugs.

The United States needs to respect and support the African people, not the strongman, whose time will eventually run out. This should be combined with a clearer message that America is indeed here for the long term, and that security assistance is not creating refugees, increasing militia groups and bringing more weapons into the continent, but helping create safe, stable and prosperous nations.

Dr. Scott Firsing is an Adjunct Professor at the University of North Carolina in Wilmington in the Department of Public and International Affairs.

Image: Girl in a USAID school in Nigeria. Wikimedia Commons/USAID