This Is What the Art of the Nuclear Deal Looks Like 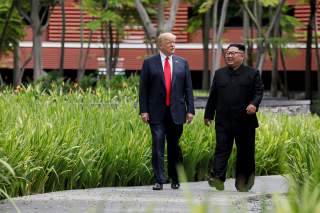 After meeting with his North Korean counterparts in Pyongyang on July 6, Secretary of State Mike Pompeo characterized the talks as “productive,” emphasizing that “progress” was made. But in stark contrast to that, North Korea’s Foreign Ministry issued a statement denouncing the Trump administration for its “unilateral and gangster-like demand for denuclearization.” The situation has led many to doubt American and North Korean resolve and sincerity towards denuclearization.

Quite the contrary, the current state of affairs points to Donald Trump and Kim Jong-un’s unique cooperation in tackling the multiple external and internal factors at hand.

Achieving the end state of denuclearization requires a firm commitment by both leaders. But at the same time, Trump and Kim face huge audience costs at home. Even for an authoritarian ruler like Kim, reverting to a hardline policy of achieving nuclear status can risk tarnishing his infallibility and national image as a strongman to the people, or incur discontent and even conflict among his relatively small winning coalitions in the Workers’ Party of Korea and Korean People’s Army.

In this context, it is not surprising that Trump described Kim as someone who “loves his people” and “loves his country very much” after the historic summit in Singapore on June 12.

Trump also faces credible domestic audience costs. For one thing, Trump needs to achieve at least some progress to prove that his foreign policy is working, and that it is in America’s best interests that he prevail after the mid-term elections.

Last week, National Security Advisor John Bolton said the United States has a plan to dismantle North Korea’s nuclear program in a year. Speaking in Tokyo on July 8 following his visit to Pyongyang, Pompeo denied accusations that the United States has softened its stance, arguing that Washington is still demanding the “complete, verifiable and irreversible denuclearization (CVID)” of North Korea.

In this context, the United States and North Korea seems to be talking past each other. But ultimately, the two countries are working towards expanding the pie. North Korea needs to show internally that he is not being forced to dismantle nuclear weapons, while at the same time showing the international society that he is still committed to the talks. The United States, on the other hand, needs to show that the process needs more time, and that Trump remains indispensable.

How will the talks play out? The nuclear negotiation between Washington and Pyongyang is asymmetrical in nature. Although we tend to view the issue as a win-win game, it is not. Kim has much more to lose: leaving aside audience costs, the North also risks regime survival. That is why in negotiations involving security issues it was always prudent for the weaker side to adopt a simultaneous, phased approach, because a lump-sum deal could always provoke commitment problems. And because there is no higher authority to see the deal through in international politics, third-party mediators factor in. That is why Pyongyang has turned to Seoul and Beijing amid this process.

In this context, it is still hard to predict the outcomes of U.S.-DPRK nuclear negotiations. But one thing seems sure: the process will muddle through for some time, during which the United States will push for speed, demanding, at the least, full access to outside verification of North Korea’s nuclear weapons and facilities, which North Korea will deny for sovereignty reasons. However, even if North Korea does not succumb to American demands, Trump will not go denouncing the regime on Twitter or resort to military threats. That is why the North Korean Foreign Ministry has said “we still value the trust we have for President Trump.”

The real game will be after the midterm elections, when Trump’s reelection will be on the line. If North Korea does not make substantial progress by that time, then Trump will be forced to revert his old game of chicken policies. Even if that means staging a war, at least Trump will have acquired the moral high ground. It may even help his reelection.

Ding Rongjun is assistant professor in diplomacy at Tongji University.