What Awaits the Rohingya in Bangladesh? 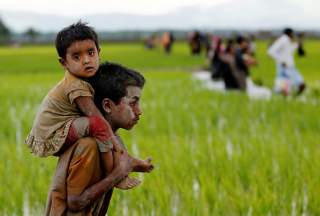 The plight of the Rohingya community is truly one of the saddest stories of our times.

It is a tragic tale of perpetual persecution, major marginalization and mass migration. In Burma, where this Muslim community’s numbers are the highest—about a million, according to most estimates—its members are denied citizenship and land. They also live on the fringes of society in India and in countries across the Muslim world.

In recent days, the Rohingya have been making major headlines. But as always, it’s for all the wrong reasons.

Last month, a group of Rohingya insurgents known as the Arakan Rohingya Salvation Army (ARSA), responding to the systematic repression that the community suffers in Burma’s Rakhine State, launched a series of attacks on local military and police facilities.

In retaliation, Burmese security forces have launched a vicious and wholly disproportionate crackdown on the Rohingya. According to a UN human-rights official, as of September 8 more than one thousand people (most of them Rohingya) may have died in the violence in Rakhine. The Burmese military has waged scorched-earth tactics that have burned down scores of Rohingya homes and leveled entire villages. Some commentators, including U.S. Secretary General Antonio Gutteres, have described this unfolding tragedy as ethnic cleansing.

Aung San Suu Kyi, the long-time democracy activist and Nobel Peace Prize winner who now serves as Burma’s de facto leader, has been excoriated for failing to help the Rohingya. Her fellow Nobel laureates, Malala Yousafzai and Desmond Tutu, have publicly appealed to her to act, but to no avail. Now that she has graduated from activist-in-exile to top leader in a nation that harbors virulently anti-Rohingya sentiment, Kyi’s moral conscience has seemingly taken a backseat to cold, hard politics.

The luckier Rohingya in Rakhine have managed to flee to neighboring Bangladesh—in staggering numbers. At first the UN was reporting that 250,000 had fled there over a period of two weeks. In more recent days, the estimates have shot up to a whopping four hundred thousand over the last three weeks.

Bangladesh is an impoverished country with one of the highest population densities in Asia. Its capital, Dhaka, is the most densely populated city in the world. In recent years, not surprisingly, Rohingya in Bangladesh—who numbered at least five hundred thousand before the latest migrations— haven’t had it easy. They’ve lived in squalid, cramped camps. For months, including in very recent days, Bangladeshi authorities have said that due to a lack of space, they intend to send tens of thousands of Rohingya refugees to an isolated island—one that’s deeply vulnerable to climate change and that regularly floods during the monsoon season. Pirates are known to operate nearby.

Not surprisingly, for the masses of Rohingya entering Bangladesh today, the domestic political circumstances at first glance don’t appear particularly fortuitous. Indeed, there is reason to fear the new arrivals could be persecuted under the guise of counterterrorism.

The government in Muslim-majority Bangladesh is run by the Awami League (AL)—an avowedly secular political party that has cracked down heavily against the Islamist political opposition, led by the Bangladesh Nationalist Party (BNP) and Jamaat-i-Islami (JI). The AL repeatedly accuses these opposition forces of staging terrorists attacks in Bangladesh. In reality, the rash of terrorist attacks suffered by Bangladesh in recent years is mainly the work of local terrorist groups such as Jamaat-ul-Mujahideen, with assistance from Al Qaeda and ISIS.

In recent months, Burmese media reports have claimed that Pakistani terror groups have recruited some Rohingya in Bangladesh. Additionally, in very recent days, Indian intelligence authorities have stated that the Pakistani terror group Lashkar-e-Taiba (LeT) has sought to recruit Rohingya refugees in India. New Delhi has used this allegation as justification—one tied to national security—for its vow to expel these Rohingya from Indian soil.

To be sure, Rohingya do belong to the violent ARSA, but this is a local insurgency that targets the Myanmar regime. There is little evidence that critical masses of the Rohingya community have gravitated to more globally focused Islamist terror groups like LeT. And yet the Rohingya refugees in Bangladesh, as has already been the case with their brethren in Burma and now possibly in India, may have to suffer for the sins of a small group of them that turned to militancy.

In effect, the Rohingya entering Bangladesh could be scapegoated by a government that projects a tougher-than-nails-on-terror image and has an ugly track record of falsely implicating innocents in terrorism.

But here’s where this story may take a more hopeful turn.

Indeed, if the latest political developments in Dhaka are any indication, the Rohingya pouring into Bangladesh may actually catch a break—albeit perhaps a short-lived one. One of the striking trends in Bangladesh this year, as Atif Jalal Ahmad and I explained several weeks ago, has been the AL’s increasing tendency to align itself with the views of the country’s Islamists on a number of policy issues. In January, it signed off on new public school textbooks that feature less material by non-Muslim writers. In June, it briefly acceded to the demands of Hefazat-e-Islam, a large Islamist group, to move a statue depicting Lady Liberty away from the Supreme Court grounds in Dhaka because it allegedly offended Islam (eventually the government returned the statue, but to a less prominent space on the Supreme Court grounds).

The AL’s shift is likely a political move, pure and simple. With elections scheduled for early 2019, the party will want to better position itself to win the votes of religious conservatives—many of them alienated by the AL’s all-out assault on the Islamist opposition. This constituency points to arbitrary arrests and other uses of force against the BNP and JI—a crackdown so devastating that these parties now struggle to mobilize on the streets—but also to ongoing war crimes trials. This legal process, overseen by the government, has led to the execution of JI leaders for alleged war crimes committed in Bangladesh’s independence war in 1971. Islamists denounce these trials as politically motivated.

The AL’s new desire to cultivate more conciliatory positions toward its Islamist rivals could benefit the Rohingya in a big way. Dhaka may believe it can curry even more favor from Islamists by throwing its weight behind a marginalized Muslim group like the Rohingya. Indeed, in recent days Bangladeshi prime minister Sheikh Hasina has launched a veritable charm offensive. She made a visit to meet with them in their camps. Tellingly, despite the speculation that Rohingya will be sent to that deserted island, the government has also announced that it will provide land to them (albeit just to provide space for new camps). Offering land to a stateless and deeply disenfranchised community like the Rohingya is a powerful gesture. Furthermore, it bears mentioning that Bangladesh is one of the only countries to describe the violence in Rakhine as genocide.

This isn’t to overstate the possibility of a better lot for the Rohingya in Bangladesh anytime soon. A community that has struggled to secure land, education and even basic forms of dignity—and is victimized by deep levels of prejudice—can’t expect its plight to magically improve overnight. Additionally, once the media glare recedes and the world—as it so often does—forgets about the Rohingya once again, then Dhaka could well quietly walk back some gestures of support. Furthermore, Dhaka has made no secret of its desire that Burma take back the Rohingya pouring into Bangladesh. In fact, Hasina is to make this call in her speech at the annual UN General Assembly.

Nevertheless, even modest and short-lived efforts to assist the Rohingya are a major improvement over what they’ve been subjected to in recent years across the various homelands they have adopted.

Ideally, humanitarian considerations would serve as a compelling rationale for nation states to assist the Rohingya. But in today’s cruel world, humanitarianism alone often doesn’t cut it. Fortunately, in Bangladesh, political circumstances may give the government an additional incentive to extend a hand to a people that has long seen nothing but the back of the hand.

Image: A Rohingya boy carries a child after after crossing the Bangladesh-Myanmar border in Teknaf, Bangladesh, September 1, 2017. REUTERS/Mohammad Ponir Hossain​.