What Benny Morris Gets Wrong about My Book 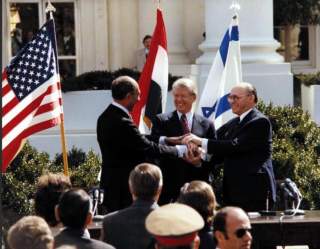 Editor’s Note: The following is a letter to the Editor of The National Interest.

I am flattered that the National Interest assigned Israel’s greatest historian to review my book Thirteen Days in September: Carter, Begin, and Sadat at Camp David. As the author of the magisterial 1948: A History of the First Arab-Israeli War, as well as many other indispensable works, Benny Morris is the foremost authority on that conflict. I would expect that he would have criticisms and corrections of my own work, which I acknowledge and for which I am grateful. It’s notable that he doesn’t contest the main points in the book. It is the details that excite his scrutiny.

But there was another man reviewing my book as well. Those who have followed Professor Morris’s twisting, paradoxical career know that he has long since transcended scholarship as he moved into extreme nationalist ideology. This is the man who, in a 2004 interview with Haaretz, defended ethnic cleansing and called for Palestinians to be put into “something like a cage.” It’s no wonder that he disagrees with some of the conclusions in my book.

Predictably on the prowl for traces of anti-Semitism, Morris leaps on my statement that, according to the Bible, “Joshua’s mission was to carve out a living space for the Israelites.” Morris interjects: “a reference to the Nazi quest for Lebensraum?” Morris also asserts that “[Wright] lets the cat out of the bag” when I describe the Sabra and Shatila massacre of Palestinians by a Phalangist militia during the war in Lebanon in 1982. I had written that the invading Israeli forces had provided illuminating flares to assist the Phalangists in the bloodletting. “The implication is that the [Israeli Defense Forces] deliberately aided the killers,” Morris writes. “This is essentially untrue.” As proof, he references the Kahan Commission of Inquiry, which—he claims—comes to the conclusion that the Israeli army had been unaware that a massacre was taking place and that “when awareness finally dawned, it intervened and stopped it. None of this is in Wright’s book.” There’s a good reason for that. The Kahan Commission describes Israeli officers tacitly giving permission for the massacre that occurred while they sealed the camps. Even after learning that there were no terrorists in the camp and that three hundred civilians, including women and children, had been “butchered,” to use the language that the Israeli officers themselves employed at the time, the military command dithered until the press got wind of the slaughter and the Americans pressured the Phalangists to end their operation.

But why resort to the Kahan Commission? Here’s Morris’s own account of the massacre (in Righteous Victims: A History of the Zionist-Arab Conflict, 1881-2001), in which he quotes Israeli defense minister Ariel Sharon as telling the Phalange commanders about to enter the camps, “I don’t want a single one of them left.” Morris goes on to speculate:

“Perhaps the Lebanese sensed—or thought they sensed—that the Israelis were not really averse to what was happening. After all, the IDF had sent them into the camps and was providing them with illumination; moreover, killing Palestinians had been the aim of the IDF invasion in the first place. At least some of the Phalangist commanders regarded the slaughter as a necessary catalyst to a Palestinian exodus—and this was a goal at least partly shared with key Israeli leaders.”

It is this history that Morris, the ideologue, has been trying to distance himself from.

Morris also says that I “buy into” the Arab narrative about Palestinian origins—i.e., that the Palestinians are the descendants of the Philistines. “Sheer nonsense,” Morris claims. Then, what happened to the Philistines? They “simply dropped out of history,” he asserts. If so, that was certainly very accommodating of them. Actually, the theory that I “buy into” in the book is one that was propagated by David Ben-Gurion, Israel’s first premier, and Yitzhak Ben-Zvi, the country’s second president, who together wrote a book, Eretz Israel in the Past and Present, in which they speculated that the Palestinians are actually Jewish peasants who had stayed behind during the diaspora and had been forcibly converted to Christianity or Islam. Modern DNA testing has demonstrated that the Palestinians and the Jews are very similar peoples who both descended from the Canaanites. Discourse in Israel has drifted quite far from the days when political leaders could imagine that the Jews and the Palestinians are essentially the same people. Morris bears some of the blame for that.

Lawrence Wright is a staff writer for the New Yorker and the author of nine books, including The Looming Tower: Al-Qaeda and the Road to 9/11, which won the 2007 Pulitzer Prize for General Nonfiction.