What Biden and Blinken Got Right on China 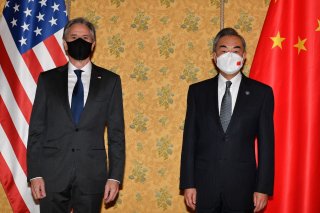 Fortunately, Blinken offered a positive alternative to this scenario when he affirmed that Washington is ready to “engage constructively with China wherever we can” because doing so “to solve great challenges is what the world expects from great powers.” This is a welcome shift from the Biden administration’s earlier avoidance or even dismissal of bilateral “engagement,” and its emphasis on “stiff competition“ with China at the expense of promoting cooperation.

At the same time, Blinken probably did not recognize the extent to which his speech hinted at potential areas for U.S.-China cooperation. Much of the U.S. vision he outlined is actually shared by Beijing. For example, he said the United States seeks to “strengthen a system in which as many countries as possible can come together to cooperate effectively, resolve differences peacefully, [and] write their own futures as sovereign equals.” He also said Washington wants to “make sure [the international order] represents the interests, the values, the hopes of all nations, big and small, from every region.” It is striking how much of this echoes Beijing’s own diplomatic rhetoric and objectives. Indeed, the agenda outlined in the joint statement issued by “Quad” (United States, Japan, Australia, and India) leaders during Biden’s visit to Tokyo last month overlapped on many issues with a speech Xi delivered a month earlier in which he proposed a “global security initiative.” Of course, there were fundamental differences on democratic values, interpretations of international law, and what Xi called “the Cold War mentality.” But it is nonetheless obvious that both sides want “peace, prosperity, and stability” and that there is ample room for collaborative approaches to such issues as the global economy, health, climate, terrorism, and crisis management. Yet opportunities for cooperation are hindered by Beijing’s and Washington’s separate pursuit of multilateralism that excludes each other. Moreover, when Blinken—in another new rhetorical turn—proclaimed that “This is not about forcing countries to choose; it’s about giving them a choice,” he nonetheless offered an exaggerated caricature of China (without naming it) to illustrate the wrong choice.

Blinken overlooked other elements of symmetry between the U.S. and Chinese approaches—characterizing Beijing in terms that arguably are applicable to Washington, and vice versa. For example, he said “Beijing wants to put itself at the center of global innovation and manufacturing, increase other countries’ technological dependence, and then use that dependence to impose its foreign policy preferences.” Similarly, “Beijing, despite its rhetoric, is pursuing asymmetric decoupling, seeking to make China less dependent on the world and the world more dependent on China.” But Washington itself clearly wants the United States to be “the center of global innovation” and to leverage that in support of “its foreign policy preferences.” And it is also engaged in selective economic decoupling to make the United States less dependent on China and other countries more dependent on the United States. Conversely, Blinken affirmed that “We do not seek to transform China’s political system.” But neither does Beijing seek to transform ours or that of any other country, contrary to the prevailing narrative in Washington.

This inattention to symmetry was also reflected in Blinken’s obligatory remarks on the subject of Taiwan. In the wake of Biden’s highly problematic public statement during his visit to Tokyo that Washington has a “commitment” to defend Taiwan in the event of a Chinese attack, Blinken provided a useful reaffirmation of “our one China policy,” including the statement (which is not always included) that “we do not support Taiwan independence.” But while reiterating that “our policy has not changed,” he said, “what has changed is Beijing’s growing coercion” and “increasingly provocative rhetoric and activity.” This fails to consider or acknowledge the extent to which Chinese behavior toward Taiwan is itself a response to rhetoric and activity emanating from Washington and Taipei.

In the end, the strategy that Blinken outlined for dealing with China is essentially the same one Beijing is following in its counterstrategy: to invest (in China’s own strengths), align (with other countries that are ambivalent about Washington’s priorities and attention to their interests), and compete with the United States regionally and globally for hearts and minds and wealth and power. And just as the United States is working—as Blinken declared—to “shape the strategic environment around Beijing,” so too is Beijing trying to shape the environment in which Washington must operate. This symmetry is what frames the strategic rivalry between the United States and China, not a winner-take-all struggle.

Blinken is probably correct that “Beijing believes that its model is the better one,” and thus that the United States’ mission is to prove the CCP leadership wrong. But he is also correct that “There’s no reason why our great nations cannot coexist peacefully, and share in and contribute to human progress together.” Contrary to the prevailing narrative, Beijing strongly believes that as well. If Washington is prepared to acknowledge this—rather than believe that China has abandoned peaceful coexistence or made it impossible—the strategic rivalry could be managed peacefully, and not exclude strategic cooperation that is mutually and globally beneficial.