What Can America Do With Nuclear Weapons? 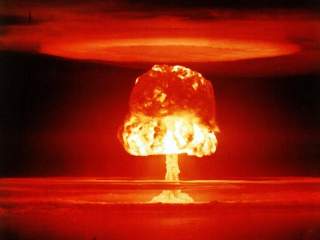 Brad Roberts has written a maddening, but important new book: The Case for U.S. Nuclear Weapons in the 21st Century.

Nuclear and missile defense policy has rated about ten nanoseconds of airtime among the candidates pursuing the Oval Office. But, eventually, someone will win and be forced to abandon rhetorical ramblings for the reality of governing.

Crafting a realistic, effective strategic defense strategy will be a major responsibility of the next president. Roberts’s book makes a worthy contribution to understanding the conundrum confronting the next administration.

The frustrating element of the book is its hollow argument that President Obama tried for eight years to be a good steward of America's nuclear and missile defense enterprise, crafting a reasonable third way between the Curtis LeMay caucus and a tribe of vegetarian hippies working to ban the bomb. But if Mr. Obama's intent was to preserve a responsible strategic deterrent while working assiduously to diminish and eliminate nuclear weapons (the so-called balanced approach), he failed miserably—something even Roberts admits.

But forget about the Obama apologia. Far more important is the book’s argument that the U.S. nuclear arsenal desperately needs modernization. "Over the next two decades," Roberts warns, "the entire remaining inventory will have to be modernized in some way. The triad of delivery systems will have to be modernized or replaced." The arsenal is such dire straits, he concludes, that the next president will have to "modernize capabilities, capacities, and core competencies."

Roberts tries to absolve President Obama for allowing this to happen by blaming it on the lack of bipartisan support for the president's programs. That's a sad half-truth. Certainly his programs received little bipartisan support. But, then again, the administration invested zero political capital in pressing for updating the nation's nuclear arsenal. From the start, Mr. Obama showed that he favored a minimalist approach to missile defense.

Other abject failures are swept under the carpet as well. Roberts concedes that the world's foremost nuclear troublemakers are still causing trouble, despite diplomatic overtures, resets and pivots. As he notes: "North Korea is proceeding to develop and deploy nuclear forces. . . . Nuclear relations with China have not improved. . . . Relations with Russia have taken a radical turn for the worse. . . ." Nor is Roberts too sanguine about how things will work out with Iran.

It’s understandable that Roberts would want to offer some kind of defense for two presidential terms of backsliding. After all, he served as Deputy Assistant Secretary of Defense for Nuclear and Missile Defense Policy from 2009 to 2013. In addition, he has an association with former Defense Secretary William Perry, one of the godfathers of the now defunct Road to Zero for nuclear weapons. Indeed, from 2013 to 2014 Roberts was the William Perry fellow at Stanford University.

Still, the weak-tea defense of the administration in The Case for U.S. Nuclear Weapons undermines the book’s credibility. Roberts would have been better off just acknowledging the current state of affairs and looking forward, rather than trying to whitewash Mr. Obama's legacy as a derelict nuclear commander-in-chief.

What Roberts does deliver are very credible arguments that there are no easy answers for resolving America’s nuclear dilemma. The odds that Russia, China, North Korea and Iran are all going to choose to play nice for the next president are about as likely as a Kardashian living a life of solitude and contemplation in a Tibetan monastery.

Roberts also discounts the possibility that regional balancing, prompt conventional strike or ballistic missile defenses could ever adequately substitute for the deterrent influence of strategic nuclear weapons. He concludes that a nuclear deterrent is essential and that modernization (while not bargain-basement cheap) is affordable and achievable.

While The Case for U.S. Nuclear Weapons does, indeed, make a case, it still understates the scope of the problem and the need for a bold solution. Roberts hopelessly clings to the notion that President Obama's cherished balanced approach is salvageable. There are challenges, however, that quickly throw the "just barely enough" strategic deterrent idea out of balance.

The threat is greater than Roberts portends. He continues the tradition of analyzing nuclear competition through a bipolar perspective: the United States against Russia, America vs. North Korea and so on.  But the World Nuclear Club is growing—and it could get much bigger. The future is, therefore, a multipolar competition. Nuclear powers could gang up on the United States or they could start an exchange independently that might have a cascading effect on other nuclear actors.  The United States doesn't need just a strategic deterrent that can match each of them. It needs a strategic capability and capacity to deal with all of them.

Roberts also underemphasizes the danger of nuclear blackmail. North Korea, for example, doesn't have to be able to fight a nuclear war with the United States; it just has to create a situation where it can credibly threaten to take out one city with one missile or conduct an EMP strike that could take down the U.S. electrical grid. Would America risk that outcome in pursuit of some minor goal like standing by ally in a border dispute? It’s the desire of nuclear competitors who seek win without fighting that Washington has to worry about most.

The so-called balanced approach also relies on unrealistic notions about arms controls. Primary among them is the belief that cutting deals in arms management and control reduces tension and promotes stability, leads to de-escalation, and builds trust and confidence between nuclear actors. That is so backwards. Obama failed with New START (and the Iran Deal will prove to be dismal failure as well) because he assumed it was just all about getting a deal. Actually, it works the other way round: first you build trust and confidence, mutual interest in de-escalation and stability between states, then sustainable agreements will follow.

Good arms control doesn't promote confidence building—it’s a byproduct of confidence built. That's why Reagan delivered the biggest arms reduction in history, the first agreement to cut the size of arsenals. Moscow acknowledged it had to accept a different strategic relationship with the United States—then the deal came. Today, no nuclear competitor respects the United States. The next U.S. president will to have to reset these relations. Then nuclear deals may come—much later.

Roberts also undervalues missile defense. Basically, he holds that defenses are okay for dealing with the small stuff—the odd, one-off missile. He clings to the belief that large-scale missile defenses would make the United States vulnerable to a cost-imposing strategy where competitors would simply build more offensive weapons than defenses could handle. Arguably, it’s the opposite. Competitors have every incentive to jump over minimalist missile defenses. Robust missile defenses are more formidable—and stabilizing obstacle.

What Roberts mostly misses is the need for a better nuclear strategy than the balanced approach.  A protect-and-defend strategy is more appropriate for America. This involves pairing a robust capacity to shoot down enemy missiles with a confident capability to retaliate with nuclear weapons. A protect-and-defend posture would give all of America's potential nuclear adversaries pause.

Finally, Roberts makes too much of the price tag challenge. Strategic defenses are a small fraction of the cost of maintaining the military. If the United States had responsible defense budgets—and spent the money responsibly—revitalizing the nation's nuclear arsenal would be completely doable.

James Jay Carafano is a vice president at the Heritage Foundation, where he directs the research on defense and foreign policy issues.