What China Knows about Africa That the West Doesn't 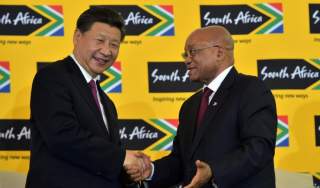 “Take up the White Man’s burden, Send forth the best ye breed

Go bind your sons to exile, to serve your captives’ need;”

Throughout the last five centuries, Africa has existed in the Western imagination between two polarized extremes. One is the Africa that exists as treasure trove of spoils, a source of slaves to take as free labor, and a vast land full of natural riches for the taking. The other extreme is the Africa that is in need of saving, a place of needy and helpless souls where Westerners can live out their fantasies of missionary heroism.

However, in the dawn of the twenty-first century, a different African story has emerged which is, and should be, challenging the way that the West imagines Africa. From Nigeria to Kenya, and from Angola to Ethiopia, Africa is now one of the engines of global economic growth, clocking in over 4 percent annually. Instead of a continent in need of saving, Africa is becoming the next great frontier for development and economic opportunity. For the West to take part in this new African story, it is crucial to build a new relationship with Africa.

Ever since the first Portuguese ships began to ply the shores of sub-Saharan Africa, the “dark continent” has existed in the Western mind as a passive, helpless entity. The first several centuries of widespread contact coincided with the European age of discovery and industrialization, both events spelling great suffering for the peoples of Africa.

As Europeans colonized the New World, the need for a vast and compliant labor force drew them to West Africa, an easy source for slaves as the region had been practicing the institution of slavery for hundreds of years. From the sixteenth century to the nineteenth century, tens of millions of Africans would eventually be brought to the New World and dehumanized by a racialized institution of slavery, creating a major modern diaspora that is culturally disconnected from its origins.

As competition flared between great European powers, Africa became a boundless source for colony grabbing. The “Scramble for Africa” culminated with the Berlin Conference of 1884, where Africa was divided as bounty and the institutions for wholesale European colonization for Africa were formalized.

In 1870, only 10 percent of Africa was colonized. By 1914, over 90 percent of the continent’s landmass, with the exception of Ethiopia, Somalia’s Dervish state and Liberia, was under European control.

With colonization also came religious missionaries, who saw themselves as generous and enlightened saviors doing God’s work by saving the heaving masses of heathen souls. This well-meaning but ultimately misguided and self-righteous attitude was captured in Rudyard Kipling’s poem “The White Man’s Burden,” describing the West’s attitudes towards its colonies.

In postcolonial Africa, Western imagination and intervention through humanitarian aid and the presence of Western NGOs have continued this legacy of missionary zeal and the attitude that the West, without input from Africans themselves, understood what is best for Africa.

As Western nations matured through centuries of social upheaval and evolution to become more humane and comfortable societies, the image of Africa evolved from a place to be looted to a place of misery where Western man could live out his savior fantasies.

With the political instability and ensuing chaos and mismanagement that followed decolonization, the image of famines, genocide and helpless Africans became ingrained in the Western imagination. Though the image of Africa transitioned from bounty to be seized to that of an eternal victim, one thing remained constant: the passive nature of Africa’s place for the West to make its mark and bestow civilization.

In 2000, the Economist ran a cover story, “The Hopeless Continent,” which argued the thesis that Africa was beyond help, and doomed to a future of barbarism and underdevelopment because of its poor social institutions and corrupt governance. A few years later, this story line would face a complete rebuttal as the continent became central to the strategic interest of a rising superpower from the east: China.

Although China had established diplomatic ties with a wide number of African nations, and even participated in aiding anticolonial struggles in the continent since the fifties, its presence on the continent had largely been minimal.

However, at the onset of the twenty-first century, China, experiencing the throes of the most massive industrialization in human history, began to identify Africa, a continent full of natural resources, commodities and a vast untapped market, as a place of great long-term strategic value.

Using a diverse arsenal of tools, from increasing trade, investment, loans and infrastructure aid, China has emerged as the dominant foreign power in Africa, and as a favored partner for African countries looking to emulate its rapid development.

From a negligible trickle in 2000, China’s trade with Africa topped $160 billion in 2015, ranking as far and away the largest trade partner with the continent. In 2014, China signed more than $70 billion in infrastructure contracts in the continent, and Chinese banks now provide more loans to African nations than does the World Bank.

In the West, China’s investment into Africa has often been painted in the light of neocolonialism, or of exploitation. Certainly, aspects and incidents among China’s wide involvement can be colored in that way. China’s involvement in Africa is also clearly defined by its own interests, not altruism. However, what this criticism fails to address is how China has become so successful in Africa.

The answer to this question lies with how China has essentially treated Africa not as a continent in need of saving or lecturing, but as partners in a long-term business deal. Exhibiting no self-appointed missionary zeal, China has approached African states with an amoral and persuasive message based on mutual benefit.

In this way, China treats Africa with far more dignity than Western governments and NGOs, who view the Africans as hopeless children who need guidance. Instead, China strikes business deals that exchange loans, infrastructure aid and goods in exchange for African commodities, political support and access into its vast and emerging markets while leaving Africans alone in finding solutions to their problems.

The fact that Western media sources consistently condemn China’s no-strings-attached attitude towards dealing with African regimes as proof that this is a disservice to Africa’s peoples actually demonstrates a certain lack of understanding that the West has of the worldview of many Africans.

In actuality, China’s own narrative of national rejuvenation, as a non-Western nation which was humiliated by Western imperialism but has managed to revive itself as a great power, is one that has deep resonance in Africa and elsewhere in the non-Western world. It is this lesson, as well as the fact that Western democratic institutions are in fact not readily applicable to the societies of many developing nations, that the West needs to learn.

The African Story Has Changed

Due to a variety of factors, from the tidal wave of Chinese investment to strong demand in commodities and increasing modernization, African countries have begun to rank among the world’s fastest growing in the past fifteen years. From 2000 to 2010, African countries averaged 5.4 percent in economic growth, which made the continent rank among the fastest-growing regions of the world. Since 2010, this growth has slowed to 3.3 percent although the impact of slower growth can be traced to the dip in oil prices affecting oil producers such as Angola, Nigeria and Sudan, with growth slowing to 4 percent from 7.1 percent in these countries.

However, despite increasing challenges, many countries in the region continue to register high growth, reflecting a diversification of economies. Between 2010 to 2014, the service sector in Africa increased to 48 percent from 44 percent, while the manufacturing sector’s contribution to the continent’s growth increased to 23 percent from 17 percent.

Africa’s future trajectory points to increased prominence on the world stage and a sustained position as a region of high growth. This is primarily due to two factors: Africa’s continuing urbanization moving it away from being a primarily rural nation, and Africa’s young population which will see the continent possessing the world’s largest working-age population by the year 2034.

Africa is still primarily a rural continent, with only 37 percent of its population living in cities. However, it already ranks behind Asia as the most rapidly urbanizing continent in the world. Since urban economies typically have three times the level of production as rural ones, the continent’s urbanization will lead to significant increases in consumer spending, industrialization and economies of scale, all leading to greater opportunities for entrepreneurs to establish themselves as leaders in rapidly growing markets during their initial high-growth phases.

In the next fifteen years, Africa’s consumer spending is projected to increase to $2.2 trillion—triple its level today. Megacities of the continent such as Cairo, Lagos and Kinshasa will soon be joined by Luanda, Nairobi, Addis Ababa and many others. With this explosion of urban life, entire chains of service industries will need to be provided, creating immense opportunities for local and global entrepreneurs alike. All this potential points to expansive and sustainable economic growth for the next several decades.