What Is China Thinking with Its Newest Plane Design? 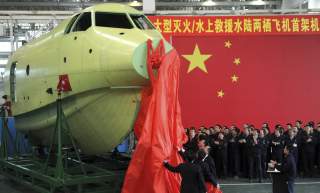 The People’s Liberation Army Navy (PLA Navy) recently announced that the various naval flying and engineering schools in Yantai (Shandong) have been consolidated and elevated to the status of the “China PLA Navy Aviation University” [中国人民解放军海军航空大学]. For a rising power with grand naval ambitions that just launched its second aircraft carrier, the move to consolidate and upgrade its institutions for training naval pilots is not at all surprising. Even putting carrier aviation aside, Chinese aircraft development (both manned and unmanned) has been a veritable beehive of activity in the last decade, producing numerous sleek fighters and attack aircraft, transports, trainers, electronic warfare and early warning aircraft, not to mention a slew of UAVs and helicopters too. Moreover, rumors regarding a long-range bomber, as well as vertical takeoff and perhaps tilt-rotor aviation need to be taken seriously. In combination with China’s bristling conventional missile strike forces, these new air capabilities are slowly but surely altering the military balance in the Asia-Pacific region.

Against that somewhat perturbing background, Beijing’s new large amphibious aircraft AG-600, which was first revealed at the Zhuhai airshow back in 2016, forms rather an anomaly since it is neither sleek, nor stealthy, nor bristling with weapons and sensors. Chinese sources readily admit (as discussed below) that the AG-600 falls short of the world’s leading designs for such aircraft. Deepening the mystery, moreover, is the fact that the U.S. Navy has not operated seaplanes of any type for decades, implying they are not cost-effective and have numerous operational limitations in modern naval warfare. So what exactly are Beijing’s planners thinking? Is this China’s “Spruce Goose”—the product of aircraft engineers run amok without strategic sense or fiscal constraints?

An expose (with a splashy front cover) from the aviation magazine Aerospace Knowledge [航空知识] last fall provides some specifics on the design, as well as an overview of the program. The AG-600 measures 37 meters tip to tail and has a wingspan of 38.8m. Its maximum takeoff weight is said to be 53.5 tons and it is planned to cruise at just 500km per hour. It can fly for about twelve hours and is reported to have a range of 4,500km. The aircraft is powered by four indigenously produced engines. Primarily intended for search and rescue, on the one hand, or firefighting duty on the other, this article boasts that the plane can carry fifty persons or alternatively scoop up 12 tons of water in just twenty seconds. However, it is also noted that the AG-600 can be reconfigured to accomplish other missions, including protection and observation of the marine environment, resource exploration, resupply of reef outposts, security against maritime smuggling, as well as “maritime enforcement and rights protection” [海洋执法与维权]. With a tip of the hat to China’s quite pervasive resource nationalism, the piece notes that AG-600 is appropriate for a “great maritime power” [海洋大国] and also duly observes that some analysts describe the South China Sea as a “second Persian Gulf” [第二个波斯湾]. However, the article also states clearly that “there is a lot of foreign chatter about military applications … [but] AG600 basically has no military use possibilities or requirements.” [基本没有军事用途的可能与必要]

As noted above, the large seaplane project seems to have more than a few critics among the Chinese military commentariat. That may explain why pictures and diagrams have yet to portray AG-600 in navy gray, but illustrations have appeared in white color with the large initials on its fuselage of “CMS” or China Maritime Surveillance [中国海监], now a subset of China’s rapidly expanding coast guard. Rather skeptical treatments have appeared in both Naval & Merchant Ships [舰船知识], as well as Modern Ships [现代舰船], two of China’s most important naval magazines. The former analysis points out the era of amphibious planes has already long past, in part due to the fact that such airframes require such a “huge expenditure of time and money” [需要花费更多的时间和经费] for maintenance. It is noted that just four of the first generation Chinese sea plane, SH-5, were actually built—less than originally planned. The latter piece makes a very explicit comparison between the AG-600 and the US-2 seaplane operated by the Japan Maritime Self Defense Forces, revealing that the older US-2 actually has both superior speed and also range. Most critically, the Japanese seaplane can apparently take off and land in significantly rougher conditions [抗浪高度], affording it greater operational versatility.

Still, AG-600 may yet retain a few key advantages. For example, it is said that it can heft 2.4 tons more weight than Japan’s amphibious aircraft thanks to its larger size. Its electronics are said to be superior not surprisingly given it is much newer, but it is additionally asserted that AG-600 can be reconfigured to handle more varied missions. To that point, a rather interesting statement is made in the Modern Ships article: “An amphibious aircraft that can undertake the anti-submarine mission is not necessarily well suited for search and rescue or fire-fighting missions and vice versa.” In the end, even the very skeptical Naval & Merchant Ships article concludes that AG-600 will be “extremely useful for rights protection and search and rescue in the South China Sea” [非常有利于南海威权, 救援]. Moreover, the point is made that AG-600 is likely more affordable than the Japanese amphibious aircraft. Indeed, the Aerospace Knowledge article suggests that Malaysia and Indonesia and other such archipelagic states are ideal export markets for this unusual plane.

One should not exclude strategic implications of the development of China’s new, large seaplane. Intelligence and surveillance are not minor issues in modern warfare and, as has been widely observed, “presence” itself has major implications in maritime sovereignty disputes. The Modern Ships article does state explicitly in its conclusion that AG-600 “in times of military conflict can undergo a large-scale refit for combat” [在战事即可进行大规模的战争改装].

And yet it would be wrong to view AG-600 mainly as part of a threatening Chinese maritime posture. Inexpensive and secure transport networks are at the heart of Beijing’s vision for the “Maritime Silk Road” initiative and this is the most compelling explanation for the AG-600 program. One need not countenance China’s expansive claims in the South China Sea to nevertheless agree that the whole region can benefit from an improved maritime search and rescue posture, not to mention safe and efficient transport between far-flung littoral destinations.

Lyle J. Goldstein is Professor of Strategy in the China Maritime Studies Institute (CMSI) at the United States Naval War College in Newport RI. He can be reached at [email protected]. The opinions in his columns are entirely his own and do not reflect the official assessments of the U.S. Navy or any other agency of the U.S. Government.