What the Coast Guard Crisis Should Teach Congress 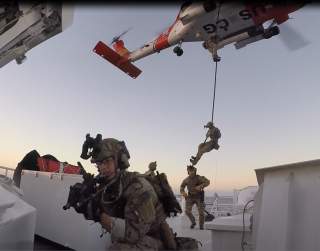 President Donald Trump is fond of bragging (and exaggerating) how much he and his administration have done for the women and men who serve in the U.S. Armed Forces. Either he did not know, or his staff did not tell him, that there are five branches of the U.S. military. In addition to the Army, Marine Corps, Navy, and Air Force, which are in the Department of Defense, there is the U.S. Coast Guard.

While the women and men who serve in the military branches in the Department of Defense—and their civilian counterparts—did get paid during this particular government shutdown (because the Congress has already passed a defense budget for fiscal year 2019), the fifty-five thousand active duty, reserve and civilian members of the Coast Guard are going without pay. This number includes forty-two thousand active duty service members who had no choice but to report for duty until their obligated term of service expires. The reason that these women and men—like their counterparts in the other four services—put their lives at risk for this country every day of the shutdown is because the Coast Guard, which is the nation’s oldest maritime service, is housed within the Department of Homeland Security, which is one of the agencies that does not yet have a budget for this fiscal year.

On January 19, 2019, after the Coast Guard personnel missed their paycheck, Secretary of Homeland Security Kirstjen Nielsen finally realized that for the first time in U.S. history members of the armed services had missed a paycheck. Accordingly, she asked Congress to pass legislation that would allow those military personnel to be paid.

The ignorance of the role and importance of the Coast Guard in protecting and defending this country at home and abroad for almost 230 years is not only a problem with this administration but for most of the body politic. Like its counterparts in the Defense Department, the Coast Guard—in addition to its domestic missions like patrolling the Arctic, rescuing fishermen, and interdicting drug smugglers—has and continues to play a significant role in providing for the nation’s security at a fraction of the cost of the other armed services.

For example, in World War I the Coast Guard escorted convoys bound for the British Isles; in World War II, its ships took part in the Battle for Guadalcanal and the invasion of Normandy; in the Korean War they rescued sailors from a Navy aircraft shot down off the coast of China; in Vietnam they participated in the Market Time Blockade off the coast of South Vietnam; in 1990 they supported Operation Desert Storm by deploying to the Persian Gulf; and in 2003, over one thousand Coast Guard personnel deployed to Southwest Asia to support the invasion and occupation of Iraq.

At the present time, as the Coast Guard commandant pointed out, the Coast Guard continues its military service by conducting missions in support of several of the Pentagon’s uniformed military combatant commands. This includes supporting the Indo-Pacific Command by clearing a path in the Antarctic; conducting maritime security operations in the Arabian Gulf for U.S. Central Command; and providing water and lakeside security around Guantanamo for U.S. Southern Command. In addition, the Coast Guard is pursuing dangerous drug smugglers off Central and South America.

The Coast Guard carries out these domestic and foreign missions in 2018 for about $10 billion, which is less than the cost of a single aircraft carrier and about 5 percent of the total budget of the U.S. Navy.

Hopefully, Congress will pass the necessary legislation to prevent this missing paycheck situation from happening again. And while they are at it, they should add another $5 billion to the fiscal year 2019 budget so that America’s oldest maritime service can begin to replace more of its aging ships, one of which is fifty-years-old. This would be something for the president to really brag about.