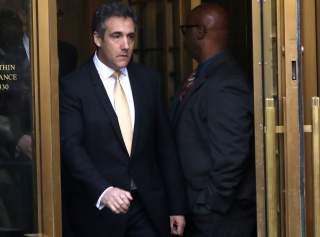 Michael Cohen continues to deliver the goods for Special Counsel Robert Mueller, or at least so it seems. The president’s former attorney and longtime fixer has pleaded guilty to lying to Congress, specifically about the Trump Tower Moscow Project.

The key question is whether we are steadily building toward something that materially enhances our understanding of Russian interference in the 2016 presidential campaign, perhaps implicating President Donald Trump himself. Or are we merely adding to a list of lies, omissions, arguably inappropriate contacts and conflicts of interest that nevertheless add up to something less than a clear-cut Trump-Russia conspiracy?

Cohen now concedes discussions about Trump Tower construction in Moscow stretched into June 2016, well into Trump’s presidential campaign. That suggests the president’s business interests in Russia were more substantial—and current, at the time he was seeking the presidency—than he has previously intimated. (Trump’s answers to Mueller’s questionnaire reportedly gave the accurate timeline.)

The revelation places Trump in some peril as Democrats are poised to retake the House next month, and with it control of several congressional investigations and the impeachment process. Adam Schiff, Elijah Cummings and Jerry Nadler are about to become committee chairmen.

At the same time, the Republican Senate majority grew to 53-47 during the midterm elections. Democrats would need to persuade twenty Republicans to vote to convict Trump in a Senate trial in order for him to actually be removed from office.

A Mueller report that paints Trump as hopelessly conflicted about Russia but stops short of alleging, much less proving, legal wrongdoing involving the Kremlin might do the trick in the House. It is unlikely to move that many Republican senators, even if accompanied by obstruction of justice charges. At the very least, the optics—and Trump’s 2020 chances—would have to be extremely poor.

That’s why it is noteworthy what was missing from the Cohen plea deal: anything suggesting he lied about a secret meeting in Prague alleged by the Trump dossier. If there was evidence Cohen had in fact traveled to the capital of the Czech Republic to arrange secret payments to Russian
hackers, you would think that would be the big story coming out of this guilty plea—not Trump Tower Moscow.

Consequently, while Cohen has a near-infinite capacity to provide details that embarrass Trump, it is longtime political adviser Roger Stone who remains the one to watch when it comes to this investigation entering presidency-endangering territory. Stone, a certified dirty trickster,
and conspiratorial conservative author Jerome Corsi appear to be the closest links to the WikiLeaks Democratic email dumps.

The late Sen. John McCain compared the Trump-Russia probe to a centipede with many shoes waiting to drop. Stone looks like he could be the next shoe. Even that won’t necessarily bring Mueller directly to Trump’s door. In theory, the whole point of keeping Stone out of the formal campaign was to maintain critical distance from his actions and to preserve plausible deniability.

But far stranger things have happened when it comes to Trump’s outside contacts. What happens if Stone was up to no good and he and Trump talked? That paints a picture more closely resembling the Trump Tower meeting that took place in the United States.

There Donald Trump Jr., Paul Manafort and Jared Kushner displayed a willingness to accept Russian dirt on the Clintons. They did not report to the proper authorities an email that on its face promised collusion. Yet at the same time, the meeting and the use of public relations contacts like Rob Goldstone would presumably not have been necessary if there had actually been an ongoing high-level conspiracy between Russia and the Trump campaign of the kind described by Hillary Clinton herself.

It is therefore not difficult to imagine someone like Stone giving Trump a general awareness of what he heard through the grapevine about what was coming from the Russians and/or WikiLeaks, with Trump salivating over the rumors rather than reporting them to the FBI. That too would fall short of the elaborate conspiracy some have alleged, but it would strengthen the political argument that there had been collusion.

Democrats would undoubtedly find a combination of Trump-Russia business conflicts and MAGA-world dirty tricks a compelling political, if not legal document. The Iran-Contra report concluded that Ronald Reagan created an environment in which his underlings felt at liberty to cross certain legal lines, even if it stopped short of alleging that he ordered anything illegal himself.

The question will be whether Mueller is able to actually connect all these dots or whether he serves up a menu of unappetizing items and leaves the Resistance to fill in the blanks.