What Comes Next for Iran's Defense Doctrine? 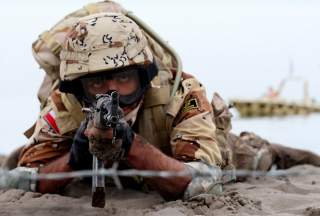 Iranian president Hassan Rouhani, in a speech delivered on the occasion of the National Army Day on April 18, 2015, characterized Iran’s defense doctrine as “defensive.” He emphasized that the military strategy of Iran was based on “active deterrence for establishment of peace and security in Iran and the regional countries.” In its modern history, Iran has initiated no war against a foreign country, but has been a victim of foreign interventions and “imposed” foreign wars (Iraq’s 1980 invasion of Iran, for example). Iran’s military policy is also defined by a “no-first-strike doctrine” and an unwavering determination to fend off foreign invasions, whatever might be the human and material costs, while not being an aggressor itself.

The deterrence-based defense doctrine seeks to raise the aggressors’ risks and costs of military invasions to an unacceptably high level, to make the enemy (read: the United States) seriously think of its adventurous and reckless military actions against Iran. It is designed to avoid a conventional war against a technologically superior and vastly powerful enemy, and aims to employ asymmetric warfare tactics to confuse the enemy and maximize passive defenses by relying on strategic depth, manpower mobilization and psychological warfare to strike fear in enemy’s mind. Mindful of the hostile regional environment surrounding Iran, the doctrine mostly relies on Iranian domestic capabilities, including its missile inventory, to fight a lengthy war and survive. In case of a shooting war with the United States, Iran’s armed forces would also seek to close the Strait of Hormuz—the lifeline of the global oil supply—to internationalize the conflict by driving up oil prices to astronomical heights and thus win the war of wills against the enemy. The defense doctrine, in a nutshell, would ensure Iran’s security and survival by inflicting highly punishing damage on the enemy and its possible partners in the war.

The doctrine is unique in important ways. Unlike the military doctrines of many regional and global powers, Iran’s defense doctrine is heavily premised on the idea of “defensive defense,” that is, the development of military capabilities aimed at protecting Iran from foreign aggression, not to jeopardize the security of neighboring or distant states. India’s current military doctrine, known as the “Cold Start Doctrine,” for example, stands ready to launch retaliatory conventional attacks on Pakistan while stopping short of crossing the nuclear threshold. America’s military doctrine has always sought to sustain U.S. global leadership through alliances with friendly states and a forward military presence to deal with threats worldwide. Russia’s post-1991 military doctrine has consistently proclaimed the use of military force only for defensive purposes, when available nonmilitary options yield no result. Iran’s military doctrine, in contrast, has evolved, and refined itself in the process, as a response to a highly inhospitable regional security environment. Just a year after the 1979 Islamic Revolution, Iraq invaded Iran, and by the early 2010s, the United States posed credible security threats by occupying two of Iran’s eastern and western neighbors—Afghanistan and Iraq—though eliminating its erstwhile enemies, the Taliban and the Saddam Hussein regime.

However, it is not only external threats but a combination of historical, strategic and political factors, such as perceived self-image, perceived strategic centrality in the Middle East, fierce nationalistic resistance to foreign intervention and independence from imperialist domination by the U.S.-led West, especially in the post-1979 period, that has been the driving force behind Iran’s defense doctrine. The overall contents and thrust of the doctrine were largely determined by two great events: the war with Iraq, and the U.S. invasions of Afghanistan and Iraq under the rubric of “war on terror.” In the process, the doctrine has developed firm roots linking national defense services to national and regional interests, security needs and strategic priorities.

The doctrine has, at the same time, intimidated Iran’s Gulf Arab neighbors and probably the United States. Iran’s continuous augmentation in military capabilities and sophistications in high precision and allegedly nuclear-capable ballistic missiles are a major cause of concern to regional and external opponents. It also seems that Iran’s defensive deterrent strategy is gradually developing an offensive dimension, as Tehran’s cross-border military involvements in Iraq and Syria suggest.

Self-perception against others has had a big influence on the origins and evolution of Iran’s defense doctrine. The Iranians see themselves as the heirs of a rich and powerful ancient Persian civilization—a civilization that wielded tremendous cultural and political influences across Central Asia, the Caucasus, Afghanistan, Pakistan and large parts of the Middle East. Known for their very rich culture, poetry, visual arts, music and world famous cuisine, the Persians proudly considered themselves enlightened people while developing stereotypes about the non-Persians living around them: the Arabs were backward people, the Ottoman Turks were decadent and the Russians were an invading power. Contemporary Iranians see the Americans as an arrogant people who are latecomers to the arena of world civilizations.

Iran’s sphere of national interests has invariably risen and fallen with the expansion or contraction of its cultural and political domain. Historically, it has included the surrounding vicinities of Central Asia (including Afghanistan and Pakistan), the Gulf neighborhood and the Levant. Iran’s perceived strategic centrality in this vast area has often been challenged by regional and extraregional powers—the historical rivalries with the czarist Russian Empire, the Ottoman Empire, and British and American designs to dominate Iran in the pre– and post–Second World War period. The British-Soviet intervention of 1941, the Soviet plan to create the Azerbaijan People’s Government out of what is now the Iranian province of Azerbaijan in the early 1940s, the British-American conspiracy to topple the government of Mohammad Mosaddegh in 1953 and Western support for Iraq’s war against Iran simply exposed Iran’s vulnerability to undue foreign interferences and machinations. This historical problem has bedeviled Iranian leaders with the perpetual problem of defending their homeland.

In the post-1979 period, Iran’s threat perceptions have principally revolved around the United States—the country’s principal ideological enemy and strategic threat. Ayatollah Khomeini branded the United States as the number one enemy of the oppressed people of the world, including the Iranians. A large segment of Iranians, hard-line conservatives in particular, believe that, after their humiliating exit from Iran in 1979, the Americans are still out to destroy the Islamic government in Tehran. The United States, needless to say, still remains Iran’s number one enemy, even after signing the nuclear deal between the two countries in July 2015.

Since 1979, the chief weapon the religious authorities have used against the U.S. threat has been anti-American political rhetoric, such as the projection of America as a “lawless cowboy” bent on becoming the global policeman. The U.S. military assault on Afghanistan in October 2001 to finish off the Taliban, and the March 2003 invasion of Iraq, convinced Iran’s leaders that they were next in the line of fire, and anti-American political rhetoric would not stop the “global sheriff” from invading Iran, once Iraq could be put under complete control. That created a whole set of new threats for the Iranians, driving them down the road to the nuclear option and forcing Iran’s armed forces to get involved in post-invasion Iraq to hamstring the United States.

Next in the list of enemies is Israel. The Iranian political and military leaders see Israel as a regional rival and also a willing American agent in the Middle East, a military outpost ready to strike America’s regional opponents and enemies. In terms of a blueprint to suppress the independence-loving peoples in the region (Iranians being on the front line), American and Israeli interests are identical. The oft-repeated Israeli threats of air assaults on Iranian nuclear infrastructure prove that, according to the Iranians. The nuclear deal with the United States has reduced the threats, though the possibility of a potential attack is not completely over. Saudi Arabia, being assisted by the United States and the nine-nation Arab coalition, has recently added itself to this list, not as an outright enemy but as a challenger to Iran’s strategic preeminence in the Gulf and the Middle East region. Missing from the list of enemies is Iraq, which has become a battleground for influence between Iran, the United States and Saudi Arabia.

The old rivals, modern-day Turkey and Russia, are no longer Iran’s enemies; rather, mutual economic and strategic interests have made them pragmatic allies. Iran and Russia’s strategic partnership thrives on their mutual interests to square off with and neutralize their common enemy—the United States—though the partnership is beset with mutual distrust and suspicions. Iran’s current relationship with Turkey is driven more by economic interests and less by strategic convergences. Despite being a top importer of Iran’s oil and natural gas, Turkey’s policies towards the Syrian civil war and the fight against ISIS in Iraq stand poles apart from Iran’s, though in the wake of the July 15 coup to topple President Erdogan, Ankara has apparently dropped its longstanding policy goal of removing President Bashar al-Assad from power in Damascus.

The Evolution of the Defense Doctrine

Iran appears to have consciously chosen a deterrent-based defense doctrine to navigate the hostile post-1979 security environment. At a minimum, the doctrine has sought to achieve two principal objectives: a credible deterrent posture to discourage foreign aggressions, and self-reliance in strategic capabilities, including the development of indigenous military technologies, defense engineering and production in all military areas. In reactions to multiple crises, the doctrine has evolved in three distinct stages: from the end of the war with Iraq to 2001, from the post-9/11 attacks to U.S. withdrawal from Iraq in 2011, and the Arab Spring period (from early 2011 to the present).