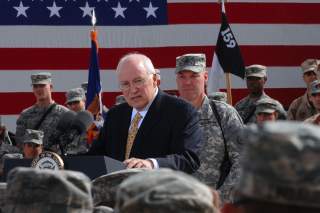 If the former chairmen of Fannie Mae and Freddie Mac, Daniel Mudd and Richard Syron, were to write a book on mortgage-lending best practices, it would likely be greeted with disdain and jeers. Yet a greater contradiction occurred last Friday, when one of the chief architects of some of America’s worst foreign-policy failures of the past fifteen years published a manifesto advising others on how to conduct international affairs.

Former vice president Richard Cheney and his daughter Liz published a long article in the Wall Street Journal last Friday that described a long list of American foreign policy failures. The former VP went out of his way to lay the blame for all the country’s disasters at the feet of the current president. While it might be tempting to dismiss Cheney’s views as a man trying to cast the blame for his own failures onto someone else, it is worth examining the nature of his argument because it is held by many current and potentially future U.S. leaders.

In essence, his thesis is that President Obama is to be condemned for failing to use force more often and more aggressively. To be fair, I agree with a number of the assertions Cheney makes against the current administration, and have publicly addressed many. But the former vice president is apparently unaware or unable to see that it was precisely the application of the Bush administration’s aggressive, militaristic foreign policy that spawned or expanded most of the negative conditions he identified.

Were the incoming administration to adopt Cheney’s belligerent international views, it would be virtually assured that American national-security interests abroad would suffer even more badly than they already have. Though his Wall Street Journal article contained many factual errors and included significant omissions, I will briefly discuss three of the more egregious errors.

First, Cheney claims that “the Enhanced Interrogation Program produced information that prevented attacks, [and] saved American lives.” This claim been thoroughly refuted by numerous sources, but most prominently by the lead FBI agent who conducted the initial Al Qaeda interrogations, Ali Soufan. He stated in categorical terms that he and others were getting useful information out of the detainees until the new, abusive techniques were used—and then the flow of accurate, useful information ended.

But perhaps more importantly, it is disturbing that the man who was once a heartbeat away from becoming the president would still so vigorously defend actions that even our allies around the world condemn. The application of torture works against American interests at virtually every turn.

Second, Cheney repeats his oft-cited claim that when President Bush left office, “Iraq was stable,” and “al Qaeda in Iraq had largely been defeated” owing to the surge his administration had ordered. The myth that the surge of American troops was the causal factor in the dramatic reduction of violence in 2008 has been thoroughly debunked in a book by Col. (retired) Gian Gentile and extensive research by Dr. Sterling Jensen, formerly one of the most senior U.S. interpreters used during the surge.

The surge was a supporting factor, but without question not the decisive factor. While it did succeed at dramatically reducing the violence, it proved to be a temporary lull in the fighting because it did nothing to change the underlying political conditions. Moreover, it has also been exhaustively detailed how Al Qaeda in Iraq was not defeated, but was transformed into the far more powerful Islamic State.

Third, he claims that terrorism poses an existential threat to the United States and that as a result, the United States should significantly increase its military action in the region as well as ending sequestration so that the Department of Defense can get a much larger budget. This is claim is wholly without merit. The Russians and Chinese, with their powerful nuclear arsenals and nearly three million combined active troops, however, clearly represent the potential of an existential threat to the United States.

A shadowy violent religious extremist group that at most consists of twenty-five thousand irregular fighters, has no air force or navy, no heavy armor, no industrial capacity to wage war and no space-based assets to aid in intelligence collection is not capable of threatening the existence of the United States. To suggest, as Cheney does, that America should respond to the terror threat by engaging in “an effort of greater scale and commitment than anything we have seen since World War II,” is grossly out of proportion. More importantly, doing so would continue to degrade our ability to respond to those nation-states that do indeed have the capacity to pose an existential threat.

Those who support a militarized foreign policy seem unwilling to acknowledge that at the end of 2002, the global terror threat was comparatively small and contained. At that time, there were no terrorists in Iraq and Saddam was militarily contained. Syria was solely concerned with regional affairs. Iran was languishing under crippling sanctions. Libya was stable and posed no threat to the region, and both the Taliban and Al Qaeda had been decimated in Afghanistan, rendering both impotent. The invasion of Iraq and the subsequent eight-year occupation changed all that.

Since that time, Iraq and Syria have become the epicenter for terrorist training and proliferation—though Libya and the Afghan-Pakistan region are close behind. The Obama administration’s continued reliance on the military instrument to solve international problems exacerbated the situation initiated by the Bush administration. Airstrikes, drone attacks and the often covert use of Special Operations troops in Libya, Pakistan, Syria, Yemen, and other areas of the Middle East and North Africa have only succeeded in seeing the global terror threat expand significantly.

Terrorism is a legitimate threat to U.S. interests, and Washington should allocate appropriate focus, energy and resources to keep our citizens safe. But it should be painfully obvious by now that the overuse of the military instrument has compromised U.S. national security. America’s military-dominant foreign policy has failed to stem a decades-long degradation in global stability, and it is time to apply a diplomacy-first technique.