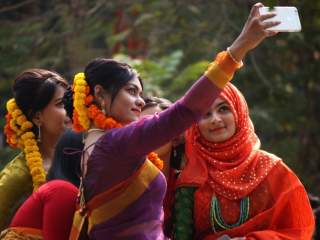 Presidential elections are about the future. They are about candidates presenting a vision for the America's role in the world, and where they want the country to go. Among the voters listening to candidates’ proposals are Millennials, the generation that comprises one-fourth of the country’s population and is now the biggest generational voting bloc in America. More than any other voting group, they are listening to what the candidates have to say about the future.

Overall, candidates are missing the mark, failing to address the kind of foreign policy Millennials want to see. Most importantly, currently proposed policy prescriptions will not lead to the world Millennials hope to shape when it is our turn to lead (clarification: I say “our” because I am a Millennial).

In a smart defense of Millennials against the usual screeds, Fareed Zakaria accurately identified Millennials’ ethos: “America’s youth are not very ideological. They combine a mix of impulses—capitalist, socially liberal, supportive of social welfare, but uncomfortable with bureaucracy and regulation.” In addition, according to a comprehensive CATO study on Millennial attitudes on US foreign policy, the generation perceives a safer world, one where international cooperation is preferable to competition, and where military force is not a preferred option. As the report states, Millennials want a “restrained grand strategy.”

At first look, these attitudes seem contradictory. After all, how could Millennials want a capitalist and socially liberal society at home and abroad without some form of American activism in the world? The capitalist, liberal world order compels the United States and its allies to secure and maintain global commons from sea lanes to the Internet. Furthermore, it requires active diplomacy and negotiations with other countries to pull of trade deals like the Trans-Pacific Partnership or the Transatlantic Trade and Investment Partnership, deals that the majority of Millennials support. Social liberalism’s acceptance abroad requires a robust human rights regime which must be backed up by human-rights-defending states.

How, then, can presidential candidates square this circle in their vision as leader of the free world? Ultimately, Millennials eschew the usual big government-small government bifurcation, and instead seek agile government. This is a fairly centrist view, unsurprising from the generational group where nearly half consider themselves Independent instead of Republican or Democrat. The US government should act cooperatively in the world when interests are at stake, and stay out of domestic and global citizens’ lives when they are not. In essence, Millennial foreign policy is dispassionate and prioritizes the achievement of strategic goals in cooperation with others. Goals achieved without American leadership are acceptable, as long as it coincides with the United States’ end goals. This foreign policy vision diverges from those of past generations. The Silent generation, GenXers and Baby Boomers see more utility for an out-front military component in America’s foreign policy. They also harbor no reservations about the United States acting unilaterally to ensure global stability.

This poses a significant challenge for the 2016 presidential candidates, especially those in the GOP. So far, Republican hopefuls have advocated for bombing “the sh*t out of” ISIS, carpet-bombing Raqqa, “punch[ing] Russia in the nose,” leading with “physical and ideological strength,” and going after “civil liberties extremists.” None of these proposals seriously resonate with the majority of Millennials, losing a potentially important constituency for the candidates during the general election. And while the Democrats are losing support among Millennials, it is unlikely that many will turn to the more hawkish GOP candidates in the ballot box. Recall that the Millennial political conscious was awoken by 9/11 and the Iraq War; foreign policy will weigh heavily on their voting decisions.

What does this mean for the future of the United States? Most importantly, Millennials want American political leaders to define a new way forward for American foreign policy. Millennials undoubtedly embrace the fruits of the post-World War II order. Indeed, the system the United States developed aimed to restrain some of its own power in order to build institutions, retain legitimacy in the world’s eyes, and help other countries develop and advance to better facilitate global stability. Now that other countries are gaining power relative to the United States—which was by American and Western design—Millennials see no problem with their country ceding power and allowing other states to help shoulder the burden of managing global affairs.

Therefore, Millennials want the United States to find a way to be agile on the global stage—step in when necessary, and, yes, “lead from behind” when not (it is the Commander-in-Chief’s prerogative to sell what is and is not important). The United States must pursue its interests, but not pursue ideological purity around the world. It must be strong, but not view military force as strength’s only conduit. It must also be fair, but ensure that others do not encroach on global and personal freedom.

Today’s political debate does not represent the Millennial vision for America’s role in the world. This is a mistake. If presidential candidates and other politicians want to represent all Americans, then the Millennial view must also be championed. Candidates ignore the desires of the country’s biggest generation at their own peril. Bravery, creativity and agility itself are required to attract Millennials to their foreign policy vision. If this is not considered now, it certainly will be when Millennials assume leadership positions in the coming decades.