What do the Taliban Really Want? 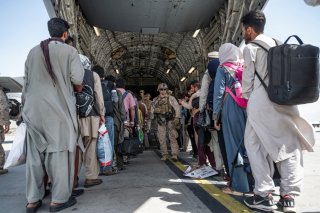 With the government thereby having folded, and with little alternative, the United States tolerated the Taliban taking charge of the city.

And then, for no reason that one can identify, nothing having happened to set it in motion, the Biden administration embarked on a series of fatefully poor decisions. They had already prematurely closed Bagram—one of the most secure bases in the world, a resource that would have been perfect for the evacuation and ongoing emergency embassy operations, and the facility that should have closed last. Now they announced that they were reducing, and shortly thereafter that they were closing, the U.S. embassy. They announced that they were sending in 3,000, then 4,000 troops to assist with this evacuation. They announced two visa programs, first for people who had worked for us as translators, soon expanded to anyone who had worked for the embassy or a government program or the military, then a second one for people associated with U.S. media or non-governmental organizations (NGOs). For the latter, a completely absurd set of rules was put in place—people could not apply from inside Afghanistan, they were not eligible until they had reached a third country, in other words, they needed to get themselves to Pakistan or Tajikistan or Uzbekistan, which was already impossible at that point since the Taliban controlled the borders. And just to add another level of impossibility, the embassy website warned that such applications would take a very long time to process and not to expect assistance in the interim.

With no reasonable route open but a visa program suggesting that we believed such persons to be highly vulnerable, no wonder they panicked. Meanwhile, U.S. helicopters were buzzing back and forth in the sky, the embassy was vacated and the flag hauled down, additional troops were arriving at the airport to hustle people out and the message was clear: the Americans expect a bloodbath. Social media did its part. Twitter and TikTok told one and all that you simply needed to get to the airport, no documents or identity cards needed, and the Americans would fly you to Paris, Canada, or the United States. Google decided to block any Taliban messages or anything favorable to the Taliban, including their assurances that they weren’t planning retribution, that civil servants could calmly show up for work, and that it was a new day, and all was forgiven. Even their orders to their commanders instructing them not to harass anyone and not to commandeer peoples’ property, which many offices and NGOs had ready to play for any Taliban who might show up at their door, were taken down.

We all saw the results: a mob of young men rampaging on the tarmac and ultimately reaching such a fever pitch of craziness that they clung to the departing planes and in some cases, held on so long that when they finally fell, they died. That was a shocking visual, as were the pictures of a woman handing her baby to a soldier over strings of barbed wire. Bad visuals are bad for domestic politics, and partisan politics are bad for intelligent decisions about our shared national interest. The Republicans forgot that it was their administration that started the withdrawal and seized the chance to slam the Democrats. The Democrats forgot that they are against endless wars and intervening in other cultures and decided that each and every Afghan must be brought to America. The Biden administration, accustomed to journalist adulation and flustered by the bad press, ordered mass evacuations pronto. Of the first 8,500 flown out without vetting or papers, only 250 turned out to be qualified. The others had simply stampeded themselves into the airlift. How long do you think it will take for ISIS to see the open door into America, if they have not already? Should journalists who can’t even be bothered to fact check, who are under pressure to produce dramatic reports and heart-rending photos, be making America’s foreign policy? Should visuals and panic dictate our conduct?

In Kabul, the Taliban were visiting the foreign embassies, offering to post guards, and asking them to stay. The French stayed. The Russians stayed. The Chinese stayed. Why didn’t we? Or at a minimum, seeing that the Taliban have no apparent plan to attack us, and didn’t for two years when they could have, why didn’t we reevaluate our decision and go back? No embassy means no refugee processing, which means no orderly way for people to try to get out if they are so qualified, which means chaos at the airport.

The Taliban must be finding all of this so confusing. Already stunned by their own success, and almost certainly not ready for it, they have tried to respect our expectations and avoid the things that outraged everyone before, but we just won’t let them. Can’t we wait and see, at least briefly? I know who’s not waiting: China, Iran, and Russia. Russian diplomats in Kabul, in relaxed conversations with journalists, are already expressing optimism in the country’s future and confidence that the Taliban are not planning punitive actions against former opponents. As we push the Taliban away, others are more than happy to embrace them. And they won’t be demanding things like human rights or freedom of the press—if we care about any of that, we can’t abandon the field. China has already announced the construction of a railroad, which by sheer coincidence happens to go to the areas with major mineral deposits. We stand to lose our huge investment; see our adversaries walk away with the gains; scupper Afghanistan’s chance to modernize and democratize—perhaps more slowly than we wished but more organically and sustainably instead; and lose a geostrategically crucial region. Future analysts will ask why. The answer: out of sheer stupidity.

Matthew 7 tells us: by their actions shall you know them. We seem sure that the Taliban haven’t changed and can’t and won’t. Shouldn’t we await their actions? Let’s encourage them to form a moderate, responsible, and inclusive government. Let’s understand that we are making a moderate, progressive Afghanistan impossible by removing, potentially to the tune of one million people, all their educated citizens, their English-speakers, their strong young men, their “woke” young women, and their minorities. Let’s know that one day, when we look back, we will see that we committed not only a brain drain but also an ethnic cleansing project, taking away the Hindus and the Sikhs who have historically been part of that country, permanently changing the face of Afghanistan to its impoverishment.

We, too, will ultimately be judged by our actions—which at this moment are rash, short-sighted, driven by irresponsible sensationalist journalists instead of judicious political leaders, destructive to our national interest, and murderous to Afghanistan’s chance at peace. Let’s not do this.

We need to freeze the evacuations until we have an orderly process in place. This may change, but currently, there is absolutely no reason for haste and every reason for caution. We need to reopen the embassy and stay in close contact with the Taliban not only to monitor them, but also to try and shape their behavior—which, so far, they appear amenable to. We need to remember what we were trying to achieve in Afghanistan: all the people we educated and all the things we did towards that goal, and not whisk the resultant human capital and embedded values and economic opportunities out of that country by the planeload, on wings of fear.

Dr. Cheryl Benard was program director in the RAND National Security Research Division. She is the author of Veiled Courage, Inside the Afghan Women’s Resistance; Afghanistan: State and Society; Democracy and Islam in the Constitution of Afghanistan; and Securing Health, Lessons from Nation-building Missions. Currently, she is the Director of ARCH International, an organization that protects cultural heritage sites in crisis zones.