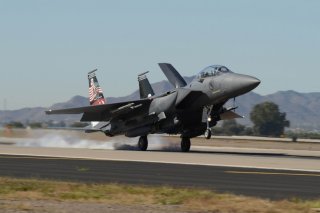 If we defeated the Islamic State of Iraq and al-Sham (ISIS), would we know victory when we saw it? We often talk about winning and losing without having any idea what these terms mean. As a new coalition of the willing gestates in the wake of Paris, before we speak of sacrifices to be made, we first need to ask what we want to achieve vis-à-vis the Islamic State. Each definition of victory carries separate sets of commitments and sacrifices. However, from brute force to outright surrender, the best way to defeat ISIS is to implode it.

Our definitions of “wins” and “losses” have a chameleon-like tendency to change. After 9/11, our definition of victory changed from removing the Taliban from power and eliminating Al Qaeda’s leadership to building a centralized, democratic Afghanistan. Now, victory means allowing the U.S. to save enough face to stave off a total Taliban victory while holding off new gains from ISIS throughout. Our ability to jump from one lily pad’s definition of triumph to another is a recipe for morass.

One renowned scholar identifies six ways terrorist organizations end: leadership decapitation, incorporating the organization into a peaceful political transition, allowing the terrorist group to succeed, changes in the group’s tactics, crushing the group through brute force, and fostering the enemy’s implosion through undermining its popular support.

Leadership decapitation is most effective when it is difficult for an organization to replace a leader once he’s been assassinated. This is a popular option, but has not met with much success, as evidenced by Israel’s targeting of the leadership of Hamas. Furthermore, ISIS has already formulated succession procedures should Abu Bakr al-Baghdadi be assassinated.

A second option is to incorporate a terrorist organization into a peaceful postwar transition. This would involve embracing regime change in Damascus as an objective and finding a place for ISIS in post-Ba’ath government. This would place the U.S. at loggerheads with Russia and Iran, two countries critical to any anti-ISIS coalition. (While John Kerry stated the Kremlin is not wedded to keeping Assad in power, and similar rumors have circulated with respect to Iran, both Moscow and Tehran have denied them.)

Even if Russia and Iran could be brought around to the idea of regime change in Damascus, another issue stands in the way: disarmament. A Third Wave–style pacted transition away from Assad’s Syria toward a coalition government that included ISIS, along with the Nusra Front and any number of other opposition groups, would require the opposition to eventually lay down their arms, and either merge into a single army or delegate responsibility for defending Syria to a professional fighting force. Neither is likely to happen without a sustained third-party intervention to manage the peace. Power-sharing agreements break down, because former combatants fear what will happen once they give up their weapons.

Allowing ISIS to succeed is an unthinkable option. Many have seen what it has done in the pieces of territory it already governs. While it has attracted support from many Sunnis tired of corruption and a lack of public services, it has attempted the genocide of the Yazidis. It is also unclear where its ambitions end, or what they entail.

Repression and fighting ISIS to a finish is an obvious and appealing option. But relying on force alone entails two problems. First, how do we know when it has been destroyed? How many members of ISIS must be killed before victory can be declared and the mission accomplished?

Another option is for ISIS to change tactics. Terrorist organizations, like states, emulate success and eschew failure. But their choice of tactics is driven, in part, by their contact with other terrorist organizations and organizational capacity, as well as the means they are seeking to attain. For the past few years, ISIS has been seen as the premier innovator on the terrorist block, through its use of social media together with its quick advances. Other groups would have to lay down their arms and meet with significant policy concessions in order for ISIS to reconsider its tactics.

The use of brute force alone is a tempting one. However, as evidenced by Russia’s experience in the Second Chechen War, reliance on force alone can easily backfire. We could create more terrorists than we kill.

Many times, terrorist organizations simply implode—by alienating the very populations they intend to attract or to govern. Audrey Kurth Cronin identifies a host of variables responsible for popular apathy, from offering the people a better alternative to widespread revulsion among the population.

There are five ways we can bring this about:

The first step in the long march to victory begins with rethinking what constitutes the battlefield. The border between Syria and Iraq is nothing more than a line on a map. For too long, we have treated these as separate states, facing separate terrorist organizations that happened to have the same name. This would be akin to Franklin Roosevelt having one policy for Nazi Germany, another for Vichy, a third for North Africa and a fourth for Mussolini’s Italy.

Second, in order to implode ISIS, it is necessary to deny it the ability to provide basic public order. Part of ISIS’ attraction was not its extreme ideology, but its ability to provide everyday services such as regular trash pick-up and keeping city streets clean. Before the governments in Baghdad and Damascus can take up these responsibilities, it is necessary to rob ISIS of a critical source of its revenue: oil.

If possible, it makes sense to work with the embattled Syrian president as a means of defeating ISIS. While Assad is a heinous war criminal, he is the lesser of two evils. But the Assad regime must end its lucrative oil arrangements with ISIS. If Damascus refuses, the U.S. and whatever allies it can bring together should bomb Syria’s oil infrastructure to take this cumulative resource out of the Islamic State’s hands. Then, with the help of newfound Awakening Councils, a coalition can rebuild the institutions that will guard the facilities and return the oil wealth to the people of Syria. These funds should be used to rebuild Syria after more than four years of devastation, peeling away support for ISIS in the process.

Third, in recent years the U.S. has glossed over the support for radical jihadists in Syria that comes from states such as Qatar, Turkey and Saudi Arabia. Our allies need to choose between their ties to the U.S. and their support for ISIS. Much of their support for Daesh is driven by their fear of Iran. Locked in a zero-sum game with Tehran, many of them believe that if Damascus falls, any loss for Iran will be their gain. However, they need to remember the prospect of “blowback,” or a boomerang effect: ISIS may attack their enemy in the Assad regime today, only to attack them tomorrow. (ISIS has already struck Saudi Arabia.) To bring this about, America can threaten to cut off lucrative defense contracts, which many Gulf states crave, unless they abandon Daesh.

Fourth, during the Second World War, Winston Churchill famously said, “If Hitler invaded Hell, I would make at least a favourable reference to the Devil in the House of Commons.” If we are serious about preventing future attacks such as the recent atrocity in Paris, we need to overcome our squeamishness toward our allies against ISIS. Recent research shows that fellow Syrians are likely to be more effective counterinsurgents than non-Syrians.

Fifth, we need to focus as much time and energy on connecting moving dots of intelligence as we do on collecting those dots in the first place. CIA director John Brennan has noted that part of the problem was efforts to rein in surveillance, which prevented Western intelligence agencies from stopping the attacks in the first place. I agree that now is not the time to restrict intelligence agencies’ ability to engage in surveillance. However, Director Brennan misses an important point. We do not only suffer from a lack of information. The U.S. and several European states suffer from an inability to compile and structure relevant information.

Conventional answers such as knocking down walls between bureaucracies will not cut it. Intelligence agencies need to take a page from industry and start implementing what’s come to be known as big data analytics—software that can be used to uncover unseen correlations between variables that would go unnoticed using conventional statistical techniques.

In the aftermath of Paris, publics across the West will demand politicians “do something.” Without clinical definitions of victory and defeat, we risk repeating the mistakes of recent history. Our options vary from focusing upon the decapitation of the leadership of ISIS to seeking its implosion. Each carries costs, as does inaction. Implosion is the best solution for the threat we face and the costs we are willing to pay for its elimination.

Dr. Albert B. Wolf is an Assistant Professor of Political Science in the School of Public and International Affairs (SPIA) at ADA University in Baku. He can be followed on Twitter @albertwolf82.