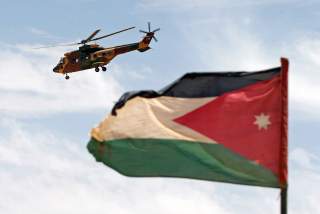 ON OCTOBER 16, 2017, Baghdad dispatched troops to the oil-rich city of Kirkuk with the goal of retaking it from Iraq’s Kurds, who had plans of creating an independent state in the northern part of the country. Not only did Iraq’s security forces, trained and equipped by Washington, assault a crucial U.S. ally in the fight against the Islamic State (also known as ISIS), they did it with the help of Qassim Suleimani, Tehran’s top operative in the Middle East, who reveled in seeing Iraqi militias under his control use American Abrams tanks and Humvees in pursuit of their mission.

This wasn’t the first time that something had gone terribly wrong in U.S. security assistance to Middle Eastern partners. In Syria, the United States spent four years and burned through more than a billion dollars trying to create a rebel force that would be able to rein in the influence of the country’s jihadists. The result was nothing short of disastrous. A minuscule number of Syrians ultimately made it through several U.S. training programs, and many who had received military support from Washington made a devil’s bargain with Al Qaeda and transferred U.S. equipment to the terrorist group.

Frustration in Washington with U.S. military assistance to Middle Eastern partners has been noticeably on the rise, and Iraq and Syria only tell part of the story. In public and closed hearings on Capitol Hill, members of Congress have more assertively voiced their concerns to Defense and State Department officials about human-rights problems, and American weapons’ misuse or seizure by terrorists. In June 2017, almost half the Senate voted against delivering precision-guided munitions to Saudi Arabia (worth $500 million) for its war in Yemen. A month later, President Donald Trump terminated what was left of the CIA’s program to support Syrian rebels and expressed interest in slashing several countries’ foreign military financing (FMF) programs and turning parts of them into loans. Secretary of State Rex Tillerson cut almost $96 million in military and economic aid to Egypt, while withholding another $195 million in FMF.

America’s exasperation with security assistance to its Middle Eastern friends is perfectly understandable, but it hasn’t led to a useful policy debate. Instead of addressing the more fundamental issues that have plagued security assistance for so long, Washington has only dealt with the symptoms. Also, it has focused on criticizing the recipients of U.S. aid and blaming them for most, if not all, of the failures, while conveniently ignoring its own problems. Contrary to political instinct in Congress, the question is not whether the United States is spending too much or too little on FMF programs designed for Arab partners. Nor is it whether the United States is selling too many or too few weapons to its Arab partners. Rather, it is whether U.S. security assistance is actually contributing to evolving U.S. policy priorities in the Middle East—and if it isn’t, where is it failing, and why?

THE UNITED States has used various forms of security assistance over the past half century to achieve numerous policy goals in the Middle East, including (1) guaranteeing Israel’s survival throughout its wars with Arab states, and preserving its qualitative edge over its neighbors; (2) prying Egypt away from the Soviets and restricting Moscow’s political access to the shah of Iran; (3) upholding Cairo’s commitment to the 1978 Camp David peace treaty, and maintaining U.S. access to the Suez Canal and Egyptian airspace; (4) containing the Islamic Republic of Iran during the 1980–88 Iran-Iraq War by secretly providing intelligence and transferring weapons to the Iraqis; and (5) checking Iraqi leader Saddam Hussein following the Second Gulf War by, among other things, arming GCC countries.

Massive U.S. foreign military sales (FMS) to Arab partners throughout these years have also done wonders for the U.S. economy. They have generated trillions of dollars’ worth of revenue, created hundreds of thousands of jobs in the American defense industry and boosted efficiency in U.S. military budgets by reducing unit costs.

These enormous political and economic benefits notwithstanding, U.S. security assistance has failed significantly to bolster military relations with Arab partners. It is true that such assistance has sustained U.S.-Arab military ties and provided the United States with deep and relatively easy access to Arab leaders. But it hasn’t enabled security integration or achieved higher levels of defense interoperability between the two sides—or among the Arabs themselves—despite much talk about these objectives. Before 9/11, strengthening U.S.-Arab military relations was not viewed as particularly pressing by either side because there were no major security threats to collective interests (Iran and Iraq were still reeling from their long and devastating conflict, while Saddam’s aggression against Kuwait was essentially countered by U.S. military power, notwithstanding the international coalition). However, Al Qaeda’s attacks on September 11, 2001, totally changed America’s perception, forcing U.S. policymakers to rethink Washington’s priorities in the region. Since 9/11, strategic-level documents, including the National Security Strategy, the National Defense Strategy and the Quadrennial Defense Review, have put a higher premium on building the military capacities and capabilities of Arab partners so they could address common threats jointly with the United States.

America’s fight against terrorism remains a key security preoccupation in the region, but Iran’s growing regional influence is becoming more of a concern, especially for a Trump administration who took office determined to halt the expansion of Iran’s reach across the Middle East. In addition to deterring Iran from attacking its Arab neighbors, a goal that materialized soon after the birth of the Islamic Republic in 1979, Trump seeks to counter Iran’s regional agenda. How U.S. security assistance has fared against these three U.S. policy objectives in the region—deterring Iran, countering Iran, and combating Sunni violent extremism—is discussed below.

Of all the likely reasons why Iran has been successfully deterred from directly attacking any of America’s Arab Gulf partners, the presumed deterrent power of the Arab Gulf states’ conventional arsenals, developed to a large extent through U.S. arms sales, might be the least convincing. This is not meant to pooh-pooh the Arab Gulf states’ military assets, or to suggest that these countries’ missile defenses, in particular, do not constrain the planning of Iran’s military leaders. But it does imply that Tehran worries about potential U.S. punishment, which robust and forward-deployed U.S. forces in the Gulf could quickly execute, more than anything else. Until the Arab Gulf states integrate militarily—a goal that seems even more remote today than it was before—deterring Iran is primarily a U.S. responsibility.

Washington’s military support to its Arab Gulf partners may have been a boon to the U.S. economy, but it has done little to stop Tehran from spreading its regional influence. Despite the large volume of powerful and sophisticated weapons the United States has sold the GCC countries, several members of that bloc still feel existentially threatened by Iran, even though it is militarily inferior to them. Such deep fears continue to create significant pressures on U.S. policy and fissures in U.S.-GCC relations. The one time the United States did address, at least indirectly, Iran’s regional challenge, it produced awful results. With the help of U.S. arms and logistical assistance, the Saudis went to war against the pro-Iran Houthi militia in Yemen, primarily to deny Tehran a presence in their backyard. Riyadh’s national-security concern was and still is legitimate, yet its prosecution of the military campaign has been ineffective so far (although the tide might finally be turning in the Saudis’ favor).

The tale of U.S. counterterrorism support to Arab partners is more promising, though still vastly lacking. Thanks in large part to various forms of U.S. help, Iraq’s counterterrorism service, a crowning achievement of the United States in Iraq, has performed ably in the fight against ISIS; Jordan’s elite military units, one of the most proficient “rapid reaction forces” in the region and highly regarded in the world’s special-operations community, have trained Arab irregular forces in partnership with the U.S. military to fight terrorism; Lebanon’s army has succeeded in protecting the country’s northern borders and evicting violent Sunni extremists; the Palestinian Authority has ensured security and coordinated with the Israel Defense Forces and Shin Bet much more effectively over the past decade; the UAE’s special-operations forces have pursued military missions jointly with U.S. special-operations commandos against Al Qaeda in the Arabian Peninsula in Yemen; and finally, Saudi Arabia’s counterterrorism apparatus crushed Al Qaeda’s insurgency across the kingdom in the mid-2000s and, more recently, denied ISIS a foothold in the country.

Then there are the less positive cases. Egypt probably tops them all. Although it has been receiving $1.3 billion per year in military assistance from Washington since the late 1970s, Egypt still struggles mightily in fighting terrorism at home, countering Islamic insurgents in the Sinai Peninsula, and securing its borders with Libya and Gaza. And while Baghdad should be proud of what its counterterrorism service has accomplished in the past couple of years, one must not forget that the Iraqi army did collapse in a humiliating fashion in 2014, failing miserably to stop ISIS’s initial onslaught, despite substantial U.S. treasure and training spanning more than a decade. Although Tunisia has received an exponential increase in U.S. security assistance since 2011 (tripling it to roughly $100 million in 2016) and has been designated by Washington as a major non-NATO ally, the country is a hotbed for Islamic militancy. It is estimated that some seven thousand Tunisians have traveled to fight in Iraq and Syria, making them the largest contingent of foreign fighters joining ISIS. Jordan’s internal-security apparatus has done well to contain the Syrian spillover and block ISIS infiltration with the help of U.S. money and equipment. However, terrorist attacks by ISIS-inspired extremists have spiked in Jordan in recent years, and youth radicalization has become a serious problem. Like Tunisia, Jordan has seen many of its young men, anywhere from two thousand to four thousand, leave the country to fight with ISIS, making the Hashemite kingdom one of the world’s highest per capita contributors of foreign fighters.