What Does the Assange Arrest Mean for Press Freedoms in America? 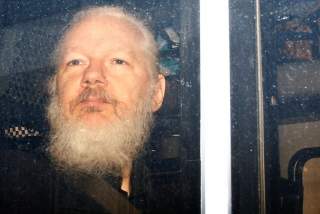 Julian Assange was arrested in London this morning, emerging after more than six and half years from the Ecuadorian Embassy where he had been granted asylum in August 2012. Originally welcomed by leftist Ecuadorian President Rafael Correa, Assange’s status has been in negotiation for almost a year by centrist President Lenin Moreno who took office in 2017. Moreno had cut off Assange’s internet connection in the embassy in March 2018, making communication with the outside world difficult.

Assange founded Wikileaks, a public archive of leaked government documents, in 2006 and served as its editor for over a decade. In this capacity, Wikileaks has published war logs for both the Iraq and Afghan wars, U.S. State Department diplomatic cables and emails from the Democratic National Committee. The now-public documents have broken numerous new stories, from war crimes in Iraq to corruption at the DNC. While its defenders point to its record of accuracy and use of widely-accepted journalistic norms for obtaining classified documents, Wikileaks’ detractors consider it, in the words of Secretary of State Mike Pompeo, “a non-state hostile intelligence service.”

Asylum was granted to Assange, an Australian, by Ecuador when he feared arrest by the British government and possible extradition to the United States related to his publication of documents. The original cover for this was a 2010 investigation by the Swedish government regarding accusations against Assange for sex-related crimes. Assange was never charged, but Swedish authorities wanted to question him further as a person-of-interest after they had allowed him to leave the country. Assange, now in the United Kingdom, offered to be questioned there but Swedish authorities were blocked by Britain’s Crown Prosecution Service. Fearing a ruse, Assange sought and was granted shelter in Ecuador’s London embassy where he has remained until this morning. Prosecutors in Sweden wished to drop the extradition case in 2013 but were again pressured by the CPS. Sweden closed the case in 2017.

The arrest this morning is related to the minor charge of violating British bail conditions, but also according to a police press release, “on behalf of the United States authorities” regarding an extradition request. The United States government obtained a sealed indictment against Assange in December 2017 according to his lawyer, which accidentally was revealed by prosecutors in November 2018. The indictment became public this morning with his arrest.

The press release from the Department of Justice charges Assange with two crimes. “The indictment alleges that in March 2010, Assange engaged in a conspiracy with Chelsea Manning, a former intelligence analyst in the U.S. Army, to assist Manning in cracking a password stored on U.S. Department of Defense computers connected to the Secret Internet Protocol Network (SIPRNet), a U.S. government network used for classified documents and communications. Manning, who had access to the computers in connection with her duties as an intelligence analyst, was using the computers to download classified records to transmit to WikiLeaks. Cracking the password would have allowed Manning to log on to the computers under a username that did not belong to her. Such a deceptive measure would have made it more difficult for investigators to determine the source of the illegal disclosures.” The attempt to crack the password was not successful.

In 2010, Chelsea (then Bradley) Manning leaked over 750,00 classified documents to Wikileaks, one of the biggest leaks in U.S. history. She was charged under the Espionage Act and sentenced to a thirty-five-year prison term, which was commuted to seven years by President Barack Obama during his final days in office. Manning has been in jail for over a month at present related to her refusal to testify to a Grand Jury regarding Wikileaks.

Along with helping her attempt to break a password, the indictment also charges Assange with encouraging Manning to leak more information. “During the conspiracy, Manning and Assange engaged in real-time discussions regarding Manning’s transmission of classified records to Assange. The discussions also reflect Assange actively encouraging Manning to provide more information. During an exchange, Manning told Assange that ‘after this upload, that’s all I really have got left.’ To which Assange replied, ‘curious eyes never run dry in my experience.’”

The charges being brought against Assange are for the same crimes the Obama administration declined to bring forth in 2013. The Obama administration worried that prosecuting Assange would be presented by his defenders as a threat to freedom of the press, since its common journalistic practice to publish classified documents and encourage sources to leak them. Accusations against Assange could similarly be leveled against The New York Times, The Washington Post, or The Guardian. While once claiming to “love” Wikileaks for their release of documents on Hillary Clinton and repeatedly citing them on the campaign trail, the Trump administration’s prosecution of Julian Assange will be presented by his defenders as the biggest menace to freedom of the press in decades.

Julian Assange is scheduled to appear in court on May 2 regarding the U.S. extradition request.