What Does China Really Think About the South China Sea (And America's Role)? 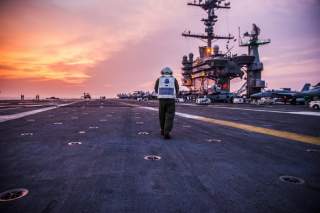 For all the coverage the South China Sea disputes have received in the U.S. press this year, one key perspective have been conspicuously absent: China’s.

To be sure, China’s “official” view on the disputes, offered in regular, soporific briefings by China’s Foreign Ministry, is no great secret. Yet the official line offered in these briefings and the state-owned press amount to little more than rote incantations of China’s “indisputable sovereignty over the South China Sea dating back over 2,000 years.” They unfortunately tell us little about what China really thinks about the South China Sea disputes and American involvement there.

With Chinese politics still shrouded in a formidable cloak of opacity, even the most informed analysis of elite thinking in Beijing remains imperfect and incomplete. But frequent interactions with Chinese officials and scholars, particularly outside the confines of formal protocol meetings, do provide some additional texture and nuance to Chinese perspectives and motivations. While it’s still rare to hear Chinese representatives in any capacity directly contradict the Party line on particularly sensitive topics, in recent years they have nevertheless demonstrated a greater degree of flexibility and candor in discussing matters of strategic import.

The anonymous recreation of one such recent discussion below is designed to offer the reader:

1. A more detailed understanding of China’s views on the South China Sea and America’s role there;

2. A greater understanding of American counterpoints and at least one U.S. perspective on the issue, and;

3. An opportunity to measure the logical consistencies (or lack thereof) in both sides’ arguments.

Chinese Discussant: The U.S. must know that China is the victim in the South China Sea (SCS) disputes. These territories have belonged to China for centuries and we have documentation of our fishermen and explorers laying claim to these islands centuries ago.This was not disputed and we had no problems in the SCS until the 1970s when oil was found and smaller countries began to invade Chinese territories. For example, the Philippines renounced its SCS claims in the 1898 Treaty of Paris but after 1970 it occupied eight islands and reefs in China’s territory.

Even then we maintained peace and agreed to “shelve” the disputes for future generations to resolve. However, in recent years Vietnam, the Philippines and other countries have taken even more provocative actions in the SCS and submitted new claims to the United Nations. They have tried to create new facts on the ground and the Chinese people will not accept this any longer so we have taken action to defend our rights. What we don’t understand is: why must the U.S. involve itself in these disputes? It should allow the parties involved to resolve them bilaterally and not take sides. America’s involvement is simply complicating the situation.

U.S. Discussant: As you know the U.S. does not take any position on the territorial disputes in the SCS. We believe it is the responsibility of the parties involved to resolve the disputes peacefully and diplomatically and…

Chinese Discussant: We know this is your official policy but many people in China believe Washington is “saying one thing and doing another.” It seems as if you are exploiting the situation and stoking tensions to push China’s neighbors into “containing China.” That is the dominant view in China.

U.S. Discussant: Contrary to these perceptions, the U.S. is not seeking to aggravate and exploit tensions there, or encourage regional countries to contain China. In fact, Washington has had very frank discussions with our partners about the need to restrain their behavior and not unnecessarily provoke China. What the U.S. is troubled by is any action taken that raises regional tensions, challenges the peaceful status quo, or impedes freedom of navigation. Some of China’s recent actions have raised concerns on all three counts.

Chinese Discussant: Are you referring to the building of “artificial islands” in the South China Sea? This is entirely legal under international law and is being conducted in China’s sovereign territory. It seems you had no problem with Vietnam and the Philippines doing “land reclamation” in the past. Only when China does it do you protest and say everyone must stop. Is this not a double standard?

U.S. Discussant: To be clear, the U.S. does not recognize the entire SCS as China’s “sovereign territory,” but you are correct: land reclamation and artificial island-building are not prohibited by the UN Convention on the Law of the Sea (UNCLOS). It’s also true the U.S. did not object to land reclamation projects by others in the past. Yet, in 2002 China and regional countries signed a Code of Conduct (CoC) where all parties agreed not to take unilateral actions that complicate the disputes. In recent years all the other claimants combined have reclaimed roughly 100 acres of land. China has reclaimed 3,000 acres. And while others have modestly expanded or fortified existing outposts, China is creating new “artificial islands” on an unprecedented scope and scale. What most concerns the U.S. is that China appears to be both militarizing those islands and claiming expansive jurisdictions for those islands not entitled under UNCLOS. The U.S. has simply called for a freeze on new projects and the militarization of the islands by all parties. Beijing seemed to agree when it said it was stopping land reclamation work earlier this summer, but satellite photographs show work has resumed again.

Chinese Discussant: We never said we would stop work altogether. The Chinese government was very clear–we were temporarily suspending work. All we are trying to do is consolidate the territory under our control and to improve the conditions of the people live and work there. This should not be controversial.

U.S. Discussant: But you’re building military-grade airstrips and fortifications. It also appears as if you placed mobile artillery on one of the islands earlier this summer. This does not suggest peaceful intent.

Chinese Discussant: What does it matter? This is China’s sovereign territory and we are within our rights to safeguard our territory against external threats. We must respect each other’s interests. And we cannot understand how the U.S. can preach to us about international law when the U.S. has not even signed UNCLOS.

U.S. Discussant: Regardless of whether the U.S. Congress has ratified UNCLOS, America has consistently upheld the maritime classifications delineated by UNCLOS. And what China is attempting to do with its artificial islands is in direct contravention of UNCLOS. The Treaty gives a 500 meter safety zone to underwater features, a 12 nautical mile territorial sea to a rock above water at low tide, and an additional 200 nautical mile Exclusive Economic Zone (EEZ) to natural islands. UNCLOS is unambiguously clear that dredging sand atop rocks and underwater features cannot change their status to “natural islands” or give them an EEZ. It seems Beijing is attempting to do just that, but we can’t be sure because China has refused to define precisely what status it is claiming for these artificial islands. As with the “9-dash line” that ambiguously claims all of the South China Sea, this lack of clarity is creating more uncertainty and volatility.

Chinese Discussant: Yes I understand this is a problem. Even the Ministry of Foreign Affairs does not know what the 9-dash line means exactly but we have never said the South China Sea is “territorial waters”–let’s be clear on that. However, this is Chinese sovereign territory. What does it matter if these features are rocks or islands? Freedom of Navigation in the South China Sea has never been a problem and never will be a problem.

U.S. Discussant: It matters a great deal. While Freedom of Navigation for COMMERCIAL vessels has not been a problem, Freedom of Navigation for MILITARY vessels has. Over the last decade China has repeatedly harassed and threatened U.S. planes and ships operating in the EEZ off Hainan Island and the Chinese mainland. China insists that foreign surveillance vessels must obtain its permission before entering its EEZ but that interpretation of UNCLOS is opposed by the U.S. and a vast majority of the world’s capitals. If China is now claiming new and expansive EEZs in the SCS it will migrate our dispute there, creating more opportunities for confrontation and miscalculation, and dragging the U.S. more firmly into the SCS than ever before. Already U.S. planes flying near the artificial islands outside of 12 nautical miles are being warned to leave because they’re entering a “Chinese military alert zone.” No one outside of China recognizes such a “military alert zone” for these features.

Chinese Discussant: If your planes fly around the islands we have no problem, they just should not go near them. In China this is seen as impolite and rude, as if you’re peering into your neighbor’s window. It is bad manners. Listen, old Chinese textbooks refer to the Spratly Islands as the southern tip of China’s territory. We don’t want a single inch more. We are not an expansionist power. We don’t have hegemonic ambitions. If we can respect each other’s interests here, we should have no problems.

U.S. Discussant: Not an inch more? You don’t claim 90,000 square kilometers in India–what you call South Tibet? What about the Senkaku/Diaoyu islands? We have seen a broad trend of Chinese assertiveness growing since 2008 and it’s not just the United States that is concerned by it—all of China’s neighbors are demonstrating anxiety that China has abandoned its “peaceful rise.”