What Does Growing U.S.-China Rivalry Mean for America’s Allies in Asia? 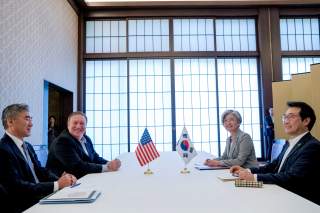 At the recent G-20 summit in Argentina, President Donald Trump and Chinese president Xi Jinping reached a temporary truce, tapping the brakes on an escalating trade war, and opening a negotiating window to deal with major structural issues in the U.S.-China economic relationship. Despite this pause in tensions, an expert panel at the Center for the National Interest, which was comprised of Michael Green (Center for Strategic and International Studies), Scott Snyder (Council on Foreign Relations) and Robert Sutter (George Washington), described how America’s allies Japan and South Korea, are adjusting to Asia’s new normal. This new normal is a climate dominated by a more confrontational, perhaps even adversarial, U.S.-China relationship. Ret. USMC Lt. Gen. Wallace “Chip” Gregson, Jr., senior director for China and the Pacific at the Center for the National Interest and former assistant secretary of defense for Asian and Pacific security affairs, moderated the discussion.

“I haven’t seen language [in the National Security Strategy] like that from the executive branch in dealing with China in fifty years, even after Tiananmen,” remarked Sutter, a former National Intelligence Officer for Asia. The Trump administration’s public strategic documents, which were released at the end of 2017 and start of 2018 (the National Security Strategy, National Defense Strategy and Nuclear Posture Review) laid out the elements of a tougher U.S. strategy towards China. However, according to Sutter, the harder line in these documents was largely ignored by the general public, and has only recently begun to be actualized through a series of tough measures targeting China: Section 232 and 301 tariffs, increased scrutiny of Chinese investment in high-technology or national-security related industries, and an enhanced U.S. military presence in the Asia-Pacific region.

Although the Trump administration has led the way, this tougher approach to China has garnered broad, bipartisan support in Congress. Furthermore, traditional support for U.S.-China engagement, particularly in the executive branch, “has atrophied.” Sutter describes the Trump administration’s emerging strategy as a shift away from America’s longstanding China strategy of “engagement plus hedging” to a more forceful whole of government “pushback” versus China. He noted that not only is U.S. pushback driven by longstanding economic and security differences with Beijing, but also by newly surfaced issues, including recent allegations by the Trump administration that China actively interferes in America’s domestic politics. According to Sutter, the key variables impacting prospects for a successful reorientation of U.S. strategy vis-à-vis China are 1) Trump’s unpredictability, which could lead to a sudden change in course; and 2) the relative costs of the pushback, both for Americans and for allies and partners in Asia.

For instance, South Korean President Moon Jae-in is likely “relieved that there is a break in the tension” between America and China, observed Scott Snyder, senior fellow for Korea studies and director of the program on U.S.-Korea policy at the Council on Foreign Relations. South Korea has an interest in limiting U.S.-China rivalry, which threatens Seoul’s “preferred strategy of navigating choice avoidance between the U.S. and China,” said Snyder. Choice avoidance is South Korea’s optimal strategy because Seoul relies on China for economic growth while depending on the United States for security guarantees. Snyder said this strategy is challenged by intensifying U.S.-China rivalry, which makes South Korea’s strategic choices “more consequential,” and puts added pressure on Seoul “as both the U.S. and China compete with each other to impose costs on South Korea” to influence its strategic decisions.

South Korea has developed what Snyder describes as a “dual hedging” instinct to navigate U.S.-China competition. In effect, South Korea relies on its alliance with America as a hedge against growing Chinese influence, while it also periodically limits cooperation with Washington depending on the extent that China appears poised to replace the United States as the dominant power in Asia. An example of South Korea’s vulnerability to U.S.-China competition he said, was the dispute that resulted from Seoul’s deployment of the U.S. Terminal High Altitude Area Defense (THAAD) system in early 2017. Intended to defend against potential North Korean aggression, China saw the THAAD deployment in Korea as potentially eroding its own nuclear deterrent capacity. According to Snyder, Beijing viewed the THAAD issue as a “loyalty test” that Seoul failed. Subsequent economic retaliation by China cost the South Korean economy approximately 7.5 billion dollars.

More adversarial U.S.-China relations also “restrict the capacity of the U.S. and China to cooperate on North Korea,” which Snyder described as South Korea’s central foreign policy challenge. As a result, Seoul “tries to lobby for the North Korea issue to be isolated from, rather than subsumed by, China-U.S. strategic competition” noted Snyder. In particular, the current Moon administration is wary that China could hamstring the present opportunity for inter-Korean reconciliation. To reduce this likelihood, the Blue House has avoided tilting towards Washington, which could risk a backlash from Beijing (see the THAAD incident), and has instead sought “more autonomous options” including taking control of diplomacy with North Korea to the fullest possible extent.

The recent October 2018 summit in Beijing between Xi and Japanese Prime Minister Shinzo Abe offers a good gauge for how Japan is calibrating its foreign policy in the context of growing U.S.-China rivalry observes Michael Green, former senior director for Asian affairs at the National Security Council. While media attention focuses on uncertainty precipitated by Trump’s policies as a driver of the recent Japan-China thaw; Green views this as ancillary to the most salient factor, which is the cyclical pattern of modern Japan-China relations. This year is the fortieth anniversary of the 1978 Sino-Japanese Treaty of Peace and Friendship that was seen as a high point in relations, he said. Diplomats, along with other proponents of engagement in Beijing and Tokyo, typically seek to leverage recognition of the treaty’s decennial anniversaries “to try to put a floor under a relationship that has become very rocky” over the past three decades, said Green.

On the Chinese side, where leaders (until Xi) have served two-consecutive five-year terms, it’s usually “too risky to do Japan” during the first five-year term, and Chinese leaders only feel sufficiently emboldened to pursue summitry with Tokyo at the outset of their second term. Green also posited that better relations with China are important for Abe domestically, as key elements of his governing coalition support a more stable relationship with Beijing. Anxiety over Trump’s policies has had a secondary, but still tangible, impact on Japan’s outreach to China acknowledged Green. For example, the business community is anxious about potential automobile tariffs, and members of Abe’s foreign policy team worry that the Trump-Xi “bromance” could be resuscitated at Japan’s expense.

The panel generally subscribed to the maxim that American allies and partners in Asia do not want to choose between America and China. However, they did concur that one area where Japan and South Korea are economically tilting strongly towards the United States is the high technology sector. In Japan, the Ministry of Economy, Trade and Industry (METI) is, per Green, quietly but successfully pushing a strategy of “decoupling [from China] in the high-tech sector.” To do this, proposed measures include data reciprocity, strategic investment protections, and blocking Chinese participation in Japanese 5G infrastructure development. For South Korea, observed Snyder, “the high point of investment in China was the mid-2000s,” but in recent years South Korean investment, including in advanced sectors such as telecommunications, has begun to swing towards the United States. “The consensus in corporate boardrooms in Japan, Korea and Australia is the U.S. market, the North American market is more important than China’s market,” said Green. This continued reliance on the U.S. market has also been reinforced by Japanese and Korean companies’ greater difficulties accessing the Chinese market in recent years.

Support and cooperation from America’s primary allies in Asia, South Korea and Japan, can contribute importantly to any U.S. effort to counter China. As Sutter noted, these allies share many of America’s economic grievances with China (insufficient market reciprocity, intellectual property rights protection, etc.). But as both Snyder and Green observed, they are also susceptible to growing Chinese influence, particularly on the economic front. Given the respective vulnerabilities of Japan and South Korea to Chinese pressure, Washington must balance these considerations as it formulates U.S. strategy.