What Does Israel Want With the UAE? 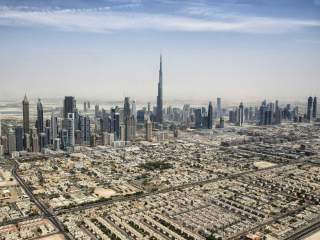 In November, Haaretz reported that Israel plans to open a rather unconventional mission in Abu Dhabi, which will mark Israel’s first diplomatic presence in the United Arab Emirates (UAE). The move is symbolic of an ongoing metamorphosis in the Middle East’s political landscape. Israel’s extended olive branch to the UAE occurs within a complicated geopolitical context, in which some traditional alliances are strained, several states are exploring new partnerships and various actors are seizing upon newly generated opportunities in the region.

The report did not surprise analysts monitoring Tel Aviv’s recent overtures to the Gulf Cooperation Council (GCC). In 2009 Israel supported the UAE’s bid to become the headquarters of the International Renewable Energy Agency (IRENA), which is now an Abu Dhabi–based international agency established to help countries use renewable energy. In 2014, Israel’s infrastructure minister declared his goal of establishing a permanent Israeli mission to IRENA. Presumably, this was due to Tel Aviv’s interest in establishing a diplomatic foothold in the GCC.

Despite Abu Dhabi’s support for Palestinian statehood and refusal to recognize the Jewish state, Israel and the UAE have in recent years found themselves aligned on several regional issues. Their common concerns generally stem from expanding Iranian influence in the Arab world and the rise of Sunni fundamentalist groups in the region, as well as the Obama administration’s handling of both of these developments. Within this context, Israel sees itself as having a vested interest in making a diplomatic overture to the Emirates.

As the mission will be under the auspices of IRENA, the UAE will not need to formally recognize Israel. Emirati officials were quick to emphasize this point. Shortly after the Israeli daily reported the opening of this diplomatic mission, the UAE Foreign Ministry’s communications director stated that “any agreement between IRENA and Israel does not represent any change in the position of the UAE or its relations with Israel”. She added that missions accredited through IRENA are “limited to affairs related to their communications and dealings with the agency. They do not, under any circumstances, cover any other activities and do not involve any obligation upon the host country with regards to its diplomatic relations or any other relations”.

Regardless of what this diplomatic mission leads to in terms of Israeli-GCC relations, its mere establishment underscores how the Middle East’s geopolitical landscape is shifting. In 2013, Prime Minister Benjamin Netanyahu declared before the UN that “the dangers of a nuclear-armed Iran and the emergence of other threats in our region have led many of our Arab neighbors to recognize, finally recognize, that Israel is not their enemy. And this affords us the opportunity to overcome the historic animosities and build new relationships, new friendships, new hopes… Israel welcomes engagement with the wider Arab world. We hope that our common interests and common challenges will help us forge a more peaceful future.”

As Israel and the Gulf Arab sheikhdoms have maintained economic ties and flirted with diplomatic overtures in the past, this mission’s opening in Abu Dhabi marks an important step in improved relations between Tel Aviv and Abu Dhabi. Although the UAE’s “pro-Palestinian” stance and public opinion in the Arabian Peninsula (which remains staunchly anti-Israel) limit the extent to which the Emirates can engage Israel diplomatically until there is a fundamental change in Israeli foreign policy, there is indeed common cause that tacitly unites Washington’s allies in Israel and the GCC.

Bearing in mind the adage that the enemy of my enemy is my friend, Israel has been reaching out to “moderate” Arab states in an attempt to find common ground, not only in the security and political arenas, but also in terms of the broader and longer-term geostrategic landscape. Iran’s expanding influence throughout the region and the growth of extremist groups such as ISIS/Daesh, have prompted a variety of states in the greater Middle East to reassess their position on Israel, as well as their alliances.

Although Israel and the GCC do not have full diplomatic relations, the Gulf Arab monarchies have maintained informal relations with the Jewish state for decades. Saudi Arabia and Israel established back-channel communications during Sheikh Kamal Adham’s tenure as head of Saudi Arabia’s General Intelligence Directorate (1965-1979).

In 1994, Yitzhak Rabin visited Oman to meet Sultan Qaboos. A year later, the Omani foreign minister, Yusuf bin Alawi, traveled to Jerusalem to pay a visit to Shimon Peres several days after Rabin’s assassination. In 1996 Israel signed agreements with Oman and Qatar to open representative trade offices in both Gulf Arab nations. Muscat and Doha subsequently shut down the offices in 2000 and 2009, respectively, in response to events concerning the Palestinians.

In 2010 the Mossad assassinated Hamas military Commander Mahmoud al-Mabhouh at the Al Bustan Rotana airport hotel in Dubai, which infuriated UAE officials. More recently, however, the UAE and Israel’s shared concerns about the geopolitical consequences of the Iranian nuclear agreement seem to have somewhat sidelined Mabhouh’s assassination and Abu Dhabi’s “pro-Palestinian” stance. In light of Qatar’s growing ties with Hamas (which has angered Israeli officials) and Oman’s deepening partnership with Iran, it appears that of all GCC nations, the UAE is where Israel has the most potential to capitalize on common ground.

At the same time, economic relations have grown between some GCC states and Israel—in the UAE’s case, significantly so. Furthermore, the UAE’s anti-Islamist position has reportedly led the Gulf Arab nation to collaborate with both Israel and Egypt to weaken Hamas. According to Israel’s Channel 2, in 2014 the UAE foreign minister met with his Israeli counterpart in France and offered to finance Israel’s war on Gaza. (The UAE and Hamas officials vehemently denied this report’s accuracy).

When the Saudi-led coalition waged Operation Decisive Storm in Yemen last March, the Gulf Arab states received support from some Israeli politicians. Sharing Riyadh and Abu Dhabi’s perception of Yemen’s Houthi rebel movement as an extension of Iranian influence, it was not surprising that Israel’s tacit alliance with Saudi Arabia and the UAE became more pronounced when all three nations viewed similarly the threat of a militia (which had received arms from Iran and incorporated anti-Saudi and anti-Zionist rhetoric into its battle cries) establishing a proto-state near the strategically-prized Bab al-Mandab passage.

For years, U.S. officials have made no secret of their intention to see Israel and the GCC nations recognize each other diplomatically. In 2002, Saudi Arabia’s then Crown Prince Abdullah put forward the Arab Peace Initiative. This proposal was aimed at resolving the Palestinian-Israeli conflict based on the establishment of a sovereign independent Palestinian state along the 1967 borders, in exchange for “full diplomatic relations, normalized trade and security guarantees” with all twenty-two Arab League members.

Since the late King Abdullah put forward this brave initiative, the Israelis and Palestinians have moved farther away from a peaceful solution. At this juncture, many analysts dismiss the concept of a two-state solution as unrealistic. Although under Netanyahu’s leadership there is no reason to imagine Israel ending its nearly half-century occupation of Palestinian land, the Israeli government should be asking itself whether maintaining its occupation of 22 percent of historically Palestinian land outweighs the potential benefit of normalized relations with all of the Arab states. This is not a new question, of course, but the stakes appear to be higher than before because of the potential opportunity cost implied in not arriving at a solution at this juncture.

In 1967, many Israelis believed that their control of the West Bank, East Jerusalem and Gaza could effectively buffer the Jewish state from neighboring Arab militaries. However, the days in which the Arab regimes seek to destroy Israel are over. Non-state actors with extremist ideologies, such as Daesh and its regional affiliates in Egypt and Libya, appear to pose a far graver threat to Israel’s long-term security. Officials in Abu Dhabi, Amman and Cairo share this view as they have indicated their preference for the survival of Syria’s Baathist regime over a Takfiri takeover in Damascus.

As the rise of Daesh and other extremist groups have created a plethora of serious problems throughout the MENA region, it has also created opportunities, which Israel and the GCC states appear to recognize. Both Israel and the GCC states should therefore take advantage of these opportunities by pursuing policies that transcend their historical antagonism and create an environment conducive to these seven nations’ long-term interests. It is possible that the opening of Israel’s diplomatic mission in Abu Dhabi can generate serious consideration of normalized relations between Israel and all Arab League members. The UAE is an excellent place to start.

Giorgio Cafiero is the co-founder of Gulf State Analytics. Daniel Wagner is CEO of Country Risk Solutions and author of the forthcoming book “Global Risk Agility and Decision Making” (to be published by Macmillan in the second quarter of 2016).