What Does Putin Want? 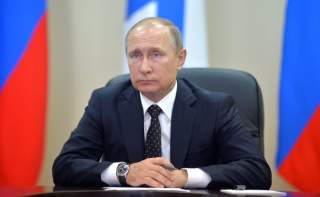 However therapeutic and tempting, especially during election season and after Russia’s direct complicity in the Syria horror, the understandable impulse to confront and isolate President Vladamir Putin’s Russia is not wise policy. Notwithstanding the many areas of altercation as well as the doomed attempt by President Obama and Secretary of State Hillary Clinton to “reset” U.S.-Russia relations after the George W. Bush administration, the next president should pursue a dual strategy designed both to challenge Putin where U.S. national interests demand it but find areas of collaboration where interests coincide. The United States should pursue confrontation where necessary and mutual interests without illusions where possible.

Wisdom begins by recognizing Putin’s assumptions, interests, and personal style since he is now the sole author of Russia’s policy. At best, deeply suspicious of and at worst resentful of and adversarial toward the United States, Putin will lose few opportunities for provocation, even belligerence. He blames the West in general but particularly the United States for the dissolution of the Soviet Union and for belittling its heir, Russia. The subsequent expansion of NATO and the EU into Central Europe and the Baltics to the borders of Russia’s immediate neighbors presents to him both a security and a psychological assault, a demeaning of and affront to Russia during its weakness. He holds U.S. support, especially by then-Secretary of State Hillary Clinton, responsible for domestic dissidents and the demonstrations against the legitimacy of the 2011 Duma elections and his own election in 2012, prompting his crackdown on domestic NGOs, media, and critics. Until the collapse of the Berlin Wall and the East German regime, he spent five years in Dresden as a KGB agent trained to probe and then exploit weaknesses in Western political elites. He begrudges the United States and (to a lesser extent) Europe even as he once apparently contemplated an affinity with both.

He now has two overriding personal objectives: first to reassert Russian international power, to see Russia great again, to resume its rightful place as a respected or at least feared world power; and second to secure his domestic power, initially through a network of cronies from St. Petersburg but now apparently via utterly dependent and therefore obedient aparatchiks from the siloviki, the security services.

All of that is where U.S. policy must begin. The incursion of Russian troops into Abkhazia and Ossetia to shrink independent and now up-start NATO-aspirant Georgia and then the amputation of Ukraine through the annexation of Crimea by Russian troops based in Sevastopol and the hybrid warfare supported, if not actually directed, by Russian troops in the Donbass region were only the most obvious reassertions of Russian sovereignty over the seemingly lost “near-abroad.” His periodic musings about Moscow’s “responsibility” for ethnic Russians in those countries are clearly aimed at Latvia, Estonia, and the Central Asian Republics, especially Kazakhstan (nearly a quarter of whose population and over three-quarters in its northern border regions are ethnic Russians). The converse threat to repatriate Central Asian and other “guest workers” jeopardizes their economies and their social stability.

Beyond the former Soviet Union, Putin’s intrusive behavior is more sporadic and opportunistic. His support for Bashir al-Assad, for example, had some roots in his desire to retain the Russian naval facility in Tartus but more important to demonstrate that U.S. meddling in regime change for democracy was costly and misplaced. Look at the result, he has noted, in Egypt, Tunisia, Yemen, and especially Libya. Conditions are far worse than they were and there is no democracy either. Both Russia and China are likely to employ their Security Council vetoes in future requests for Libyan-like humanitarian military interventions which, they both believe, were always designed by the United States and its European allies not, as ostensibly rationalized, to protect innocent civilians from an immediate onslaught by Muammar Ghaddafi’s troops but rather to replace him with a democratic regime. Some part of the difficulty in negotiating and implementing a humanitarian relief corridor for Aleppo is the result of the Libyan “betrayal” although the removal of Assad is an overt allied objective, not the result of a failure in foresight. Putin has no love for Assad but Assad represents order and, in Putin’s view, a more successful instrument for the defeat of the Islamist rebellion than the fractured and effete “moderate forces” championed by the West, let alone by insisting on democratic change in an essentially beastly tribal society. Moreover, support for Assad has re-inserted Russia as an indispensable power player in the Middle East since the road to relief runs primarily through Moscow not Damascus and since it also buys Putin points with Iran in its divine struggle against the Great Satan. Finally, we have the evidence of Russian interference in the 2016 U.S. elections, repayment in Putin’s eyes for the U.S. democracy efforts in Russia before he expelled USAID and its democracy-promoting grantees and decapitated serious opposition parties, independent media, civil society organizations, bloggers, and free competitive elections. All of this is more than irritating for any attempt at U.S.-Russian détente. It is part of Putin’s larger but not really premeditated opposition to U.S. global standing and interests. He will seize openings where and when he can.

But, unlike Stalin, Putin is neither irrational nor megalomaniacal, not domestically and not internationally. He is authoritarian but not (yet) totalitarian. In addition to assailing U.S. interests, he has also been willing to work with the United States and its allies when it suits his broader personal and national interests. To cite some examples, Russia played a productive role in the 5+1 talks to limit Iran’s immediate nuclear capabilities. It has supported formal Security Council sanctions against North Korea although evidently undermined some in practice. The carnage in Syria continues thanks in part to Russian forces, but Putin did assist in the limited removal of Assad’s chemical weapons although not his barbaric barrel bombing or starvation tactics. Russian planes have joined in Syrian air attacks against Assad’s opponents, not just ISIS. Still Russian support for a limited relief effort remains possible although increasingly unlikely absent some (perhaps unacceptable) guarantees for Assad and possibly abandonment of the Syrian opposition. But Putin has signaled that he has no long-term commitment to Assad if an acceptable resolution can be found for the regime. Fourth, Putin helped on the now-all-but -defunct Northern Distribution Network to resupply U.S. and coalition forces fighting the Taliban in Afghanistan. In each of these cases, where there was a clear but limited conjunction of interests, Putin was willing to cooperate even with the United States.

What therefore should be the policy of the next president?

First and foremost, the administration should clearly understand that Putin is probably best seen as a challenger that despises the United States, its allies and their interests, especially their democratic values while he redresses Russia’s post-Soviet humiliation by returning it to its rightful place as a global power. His ego and self-confidence are surprisingly fragile for a global leader who projects such personal strength and machismo even as he presides over a declining population and economy. Indeed, his declining assets make him all the more likely to preserve what he has and to lash out, sometimes unpredictably, like an injured bear.

So there will be little good will or trust and little room for miscalculation and error. Putin will interpret every misunderstanding as an intentional effort to keep him and Russia subservient. Second, he will of course place the economic, political and security interests of Russia first. In that he will differ not at all from other national leaders except that the conjunction of interests and the consequent room for productive collaboration are likely to be narrow. There should be little expectation of eleemosynary cooperation but there may be some so neither should there be exaggerated cynicism. Third, the expectation should be of competition more than cooperation, a zero-sum perspective far more than one of collaboration. Fourth, Putin should be expected to play off the Western allies and partners against the United States and against one another and to poison their relations with other countries. It will be a difficult relationship which the United States and its allies should approach realistically, taking any idealistic payoffs as gravy.

That will mean being constantly mindful of U.S. interests and those of its allies while drawing careful, well-considered lines and signaling clearly and firmly U.S. intentions to protect those core interests. But the well-considered lines and signals should be real. Before drawing them, the allies should calculate what costs they are actually willing to impose should the lines be crossed and then to exact those costs if necessary. The relationship will be too fragile for bluffing. Attempting to do so will invite future misapprehensions and the increased likelihood that real interests will not be understood let alone respected, including the possibility of unintended escalation even into war.

NATO lines in particular should be clear: the Baltics and Central Europe will be defended as will the traditional NATO territories of course. But what part, if any, of Ukraine or Georgia is the West willing to protect, at what cost, and accompanied by what unambiguous signals? How does NATO-member Turkey fit? What should the alliance expect from Turkey and what should it offer, indeed what has it already offered? What constraints should be placed on the “front-line” NATO states in exchange for Article 5 guarantees? Should they have entirely free rein to protect their sovereignty, say their air space from Russian warplanes if shooting them down engages the entire alliance? What about ambiguities like hybrid adventures? What about the Arctic? What about hacking and cyber-warfare? What about sea lanes and air lanes? Nor is there room for mood swings. The allies need to be steady, firm, and far-sighted. However, unlike the Cold War, while the stakes are high they are not existential. This will be a contestation between states but no one is threatening the imposition of a new way of life or theory of society on anyone else let alone obliteration.