What Does Russia Expect from the Putin-Zelensky Meeting? 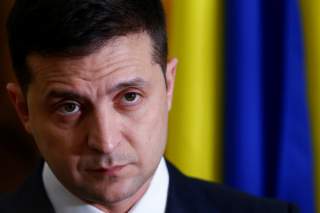 Russian president Vladimir Putin and Ukrainian president Volodymyr Zelensky will come face to face for the first time during the Normandy Format peace talks in Paris on Monday.

At first glance, the upcoming Putin-Zelensky summit appears to have all the necessary ingredients for a potential breakthrough meeting. The last gathering of the Normandy Format—four-way meetings between Russia, Ukraine, Germany, and France aimed at ending the war in eastern Ukraine—took place in 2016. Much has changed since then. Over the past several months, Moscow and Kyiv have held a historic prisoner swap and brokered a troop withdrawal deal between Ukrainian government forces and pro-Russian separatists.

But can the Putin-Zelensky summit live up to these high expectations? The National Interest spoke with several prominent Russian foreign policy analysts to better understand Moscow’s goals and expectations for the latest round of the Normandy Format peace talks.

Zelensky won a landslide victory in Ukraine’s presidential election back in April on a pledge to fight corruption and restart dialogue with Russia to end the war in eastern Ukraine. The comedian-turned-politician demonstrated his strong popular backing again in July, which is when his Servant of the People party captured a majority of seats in the country’s parliamentary elections. With this mandate from the Ukrainian public, Zelensky has been able to take the first steps in easing tensions with Moscow.

In September, Russia and Ukraine exchanged dozens of prisoners. Then on October 1, the two countries and Moscow-backed separatist groups signed a peace roadmap that called for all sides to withdraw their troops from the front line to pave the way for elections conducted under Ukrainian law in the separatist-controlled territories.

But Zelensky’s overtures toward Moscow have not been popular with everyone. Following the announcement of Zelensky’s deal with Russia and the separatists, thousands of demonstrators rallied across Ukraine to accuse their president of “capitulating” to the Kremlin. Soldiers from ultra-nationalist Azov Battalion went so far as to initially refuse to obey Zelensky’s orders for withdrawal.

A recent poll from the Kyiv International Institute of Sociology found that Zelensky’s approval rating dropped by 21 percent over the past two months, from 73 percent in September to 52 percent by the end of November. The pollsters noted that Zelensky’s handling of the conflict in eastern Ukraine, along with some unpopular reforms, was part of the reason why the president’s support fell so rapidly.

This backlash has convinced many in Moscow that while Zelensky may have good intentions, he lacks the political leverage to pursue a detente with Russia.

“Although Zelensky won more than 70 percent of the vote, he still has yet to consolidate his power and the aggressive nationalist minority is able to dictate its conditions to the current government,” said Andranik Migranyan, an informal advisor to the Russian presidential administration and a professor at the Moscow State Institute of International Relations.

Even Putin appears to have some misgivings about his Ukrainian counterpart’s political vulnerability. During an investment forum in Moscow on November 20, the Russian leader explained that while he does not doubt Zelensky’s sincerity, he questions whether the comedian-turned-president can actually follow through on his promise to bring peace to eastern Ukraine.

“What is my relationship with Zelensky? There isn't one. I have never seen him. I don’t know him. We spoke over the phone. I think he is a nice man, an honest one. I think that he really wishes to change the situation for the better, especially in Donbass,” the Russian president said.

"Whether he will be able to do it, I don't know yet," Putin added.

But while many in Moscow sympathize with Zelensky’s political predicament, there is little appetite for Russia to help relieve the Ukrainian president’s domestic pressure by offering him major concessions. On the contrary, some of the experts interviewed by The National Interest argued that Putin should adopt a tough negotiating stance with Zelensky.

“My opinion is that Russia should not give Zelensky any serious concessions or make any major steps to meet him halfway because there's no guarantee that he won't be a lame-duck by the end of next year,” said Alexei Chesnakov, Director of the Russian Center for Current Politics.

Chesnakov also explained that in Moscow there is growing doubt about whether Zelensky has a clear game-plan for addressing the most contentious issues in the conflict.

“For the two sides to even trust each other, it is important to understand whether Ukraine can implement the political points of the Minsk agreements—law on a special status for the Donbass, ratifying that law into the constitution, amnesty, etc.,” he said.

“As of now, Ukraine does not have any idea on how to resolve these questions that would be acceptable to Russia,” Chesnakov added.

Even more alarming for Moscow are recent signals from Kyiv that the Zelensky administration could walk away from the Minsk agreements. On October 10, Zelensky declared that Ukraine would pull out of the agreements as early as next year if the country’s parliament fails to adopt a law on a special status for the separatist-held territories. A month later, the head of Zelensky’s Servant of the People party in parliament stated that the purpose of meeting with Putin was for Ukraine “to get away from the Minsk agreements,” which he said were “enslaving” the country. Ukrainian Foreign Minister Vadym Prystaiko announced that Ukraine might withdraw the agreements if it leaves the Normandy Summit dissatisfied.

Such an outcome would be unacceptable for Russia, explained Dmitry Suslov, an expert on U.S.-Russian relations at the National Research University Higher School of Economics.

“It is important for Russia to keep the Minsk agreements intact because otherwise it raises the question: For what did we endure all these years of American and European sanctions for,” he said.

The Minsk agreements refer to two deals signed by Russia, Ukraine, eastern Ukrainian separatists in September 2014 and February 2015 in the Belarusian capital of Minsk. The agreements attempted to provide a roadmap to ending the war in eastern Ukraine and reintegrating the separatist republics into Ukraine by mandating demilitarization of the conflict zone, amnesty for combatants, and constitutional reform that would provide the separatist regions with greater autonomy within Ukraine. More than five years after the second Minsk agreement, however, both Russia and Ukraine accuse each other of not honoring their commitments.

If Moscow is so pessimistic about the upcoming talks in Paris, then why did it agree to take part in them? The Russian experts interviewed by the National Interest stated that Putin is less interested in winning over Zelensky, than in gaining the support of French President Emmanuel Macron and German Chancellor Angela Merkel.

“I think that Putin is hoping that Macron and Merkel will explain to Zelensky why he has to implement the Minsk agreements, which many in Kyiv don’t like,” Migranyan said.

“The outcome of the Normandy talks will greatly depend on what Macron and Merkel will do,” Suslov agreed.

“If they support Putin, then Zelensky will have no choice but to acquiesce. But if they side with Zelensky, I don’t exclude the possibility of renewed fighting in eastern Ukraine,” he said.