What Does Supreme Court Success Mean for Kavanaugh? 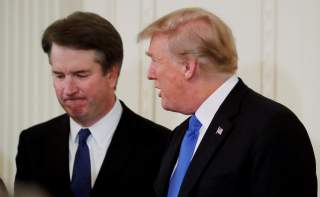 Brett Kavanaugh is on his way to the Supreme Court. Betting markets have swung heavily in favor of his confirmation, and with good reason. Nothing more substantial than Christine Blasey Ford’s original accusations emerged after last week’s frenzy of new reports and rumors about Kavanaugh’s behavior in prep school and college. And Ford’s claim to have been sexually assaulted by Kavanaugh remains uncorroborated after further investigation by the FBI. Republicans were never going to abandon Kavanaugh based on suspicions alone—claims had to be substantiated, and none of them were.

Kavanaugh’s critics know this: it’s why in recent days the focus of their attacks has shifted to claiming that he lied about his youthful drinking when he appeared before the Senate Judiciary Committee last week. An even more desperate ploy has been to argue that Kavanaugh’s fiery and emotionally charged responses to the committee’s questions were un-judicial. The case against Kavanaugh has gone from claiming he’s a sex offender to claiming that he’s a liar to claiming that he has an unsuitable temperament. In short, the case has become steadily weaker and more subjective. The fact that retired justice John Paul Stevens has emerged from obscurity to criticize Kavanaugh’s behavior in front of the Senate last week adds nothing to the story, except to reinforce progressives’ delusions about their own moral authority. Stevens may have been a Republican, but as a justice he was unfailingly liberal—certainly no conservative looked to him in his days on the court, or looks to him now, for principled guidance.

Kavanaugh’s appointment has of course been politically and ideologically polarizing—that was inevitable given that he will replace Anthony Kennedy, the idiosyncratic Republican who has long been the court’s swing vote. But Democrats and their allies, even as they’ve acted in a disciplined partisan manner themselves, have persisted in trying to present themselves as mere defenders of the Supreme Court’s honor and integrity. They have wagged their fingers at everyone else, without realizing how utterly pompous they seem. In this, the Kavanaugh saga contains an echo of the Democrats’ failures in 2016. “I’m with her” was the Clinton campaign’s idea of an argument; in fact, it was an expression of cliqueishness and conformism, as well as contempt for the idea of any more substantive debate. It’s worth wondering whether the Democrats would have had more success against Kavanaugh—not least with swing senators Susan Collins and Lisa Murkowski—if they had openly staked their opposition to Kavanaugh on how he would be likely to vote if Roe v. Wade came up for reconsideration.

Certainly Kavanaugh is not on a path to confirmation because of the brilliance of his defenders. There have been crude attacks on Ford and exquisitely refined alternative scenarios that credit her with truthfulness and accuracy on every point except for mistaking Kavanaugh for somebody else in the midst of the alleged assault. These arguments overshot their marks: we don’t know enough about Ford to have any fair guess about how reliable she is, which is precisely why the evidence matters. With no evidence forthcoming, no corroboration from anyone else who was at the party she claims to have attended, it’s sufficient just to say the charge is not proved. Kavanaugh is not being prosecuted in a court of law, and his critics have said—often without putting it quite so frankly—that he should not have the benefit of the presumption of innocence. But he should, and he must, as anyone in public life should: the rules of evidence in the court of public opinion may be less strict than those in a court of law, but evidence still matters. The disingenuousness of progressives who argued that there was no harm in merely denying Kavanaugh a Supreme Court seat, just to be safe, was striking. They were really saying that a person could be turned into an unconvicted sex offenders in the eyes of the public without any corroborating evidence. The only way anyone could claim this wasn’t a serious injury and injustice in the case of an innocent party would be by downplaying the gravity of the mischaracterization: if it’s not a socially toxic thing to be known as a man who commits sexual assaults, then a false charge and “conviction” in the public arena wouldn’t be a big deal. But of course, such a reputation should matter, and so the truth of the accusation matters as much in the wider realm of public opinion as it does in law, even if jail terms are not at stake.

Public opinion, no less than a court of law, has to have certain standards. A question that has been brought to light by the Kavanaugh saga, but obscured by its partisan fury, is whether in the court of public opinion accusation alone is enough to convict someone or whether an accused party is innocent in the absence of supporting evidence. For all that progressives present themselves as guileless defenders of the weak, their prosecutorial zeal derives from their overwhelming social power and lack of scruple about using it. They have spiritual authority and unchecked power within the media and academy, and if they say someone is a sex criminal or a thought criminal, then he simply is—and there may be no appeal. Unfortunately, this perfect system of moral justice is stymied by the inconvenient fact that Republicans exist and the unenlightened public can still vote. The Supreme Court, with Republican justices like Stevens, was meant to make that moot. But with a justice like Kavanaugh, a vital institution will remain outside the control of the nation’s ethical elite. No wonder they have begun to dream again of court packing—no court must stand in the way of the revolution, for social justice itself is at stake.