What Does the Manafort Raid Mean for Trump? 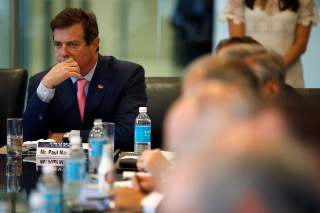 All along the real vulnerability of those associated with the Trump campaign has less been collusion with Russia, which would be tricky to prove, but financial corruption, which may not. That scenario came to a head with the revelation in the Washington Post today that the FBI searched former Trump campaign manager Paul Manafort’s home in Virginia in late July. Manafort was roused in the wee hours as a team of agents proceeded to invigilate his private papers. They were apparently looking for foreign banking records and tax documents. The question hovering over the raid is why it was deemed necessary. The Manafort camp has stated that it’s already cooperating fully with various investigators, but the fact that a federal judge found “probable cause” to approve the search warrant is striking.

For Trump and family members such as Donald Trump, Jr. and Jared Kushner, the question has to be this: Is Manafort now singing to the Feds? Tealeaf readers are pointing to a new National Enquirer article as potent evidence that Manafort’s standing in the Trump camp is less than zero. The Enquirer has been an unflinching champion of Trump and is always ready to engage in character assassination of his detractors. Its chief executive David Pecker is a close friend of Trump’s. Lo and behold, the supermarket tabloid now suggests that Manafort is a bad hombre, referring to a “sick affair” with a woman less than half his age.

Back in the real world, there can be no doubting that Manafort’s multiple ties to Russia and Ukraine, coupled with the fact that he was in the celebrated June 2016 meeting with Jared Kushner and Donald Trump Jr. and several Russians, not to mention his role for several months as Trump’s campaign manager, suggest that he may be the most tempting target for Robert S. Mueller III’s investigation. Flip Manafort and you potentially have invaluable insights into what actually did—and did not—take place during the Trump campaign when it came to ties to Russia, either financial or political.

Comparisons to Watergate are likely to flourish as old hands recall, among other things the draconian sentences that Judge John Sirica threatened to mete out to conspirators if they refused to talk. G. Gordon Liddy remained mum. Others, including James McCord, cracked. Sirica’s unorthodox judicial measures, including asking direct questions, ultimately led to the release of the Watergate tapes. “Simply stated,” Sirica later wrote, “I had no intention of sitting on the bench like a nincompoop and watching the parade go by.”

Trump himself has been trying to perform a kind of political jiu-jitsu. In declaring the investigation a “witch-hunt,” his aim is clearly to galvanize his base to support him against the forces seeking to topple his presidency. Unlike Richard M. Nixon, who also used the word witch-hunt to describe Watergate, Trump is impulsive and volatile. Trump, a master of fire and fury, to use his newly popular expression, is certain to continue holding rallies and deploying his Twitter account to belittle and insult his real and perceived political enemies as well as nominal allies. Today, for example, he admonished Senate majority leader Mitch McConnell: “Senator Mitch McConnell said I had ‘excessive expectations,’ but I don't think so. After seven years of hearing Repeal and Replace, why not done?” The question isn’t unfair. But how such potshots will help Trump maintain the loyalty of Republican Senators, whom he will need to count upon if it ever came to impeachment, is a question that only Trump can answer.

Trump’s penchant for conflict, though, could cause him his biggest problems abroad. For now, the greatest peril Trump faces isn’t the Mueller investigation but stumbling into a war. His swipes at North Korea, which he apparently issued spontaneously in Bedminster, New Jersey at the Trump National Golf Club, were unprecedented, to use another of his neologisms. Since 1945 American presidents have been careful not to threaten nuclear war publicly. Trump appears to be breaking new ground in this area as well.

Trump’s alarm over North Korea’s nuclear advances is fully merited but it should not shade into alarmism. Couple his truculent talk about the portly pariah of Pyongyang with his apparent conviction that Washington should pull out of the Iran deal and you have a recipe for a possible worldwide conflagration. Pull out of the Iran agreement and you could easily wind up with another North Korea on your hands. Trump was elected in part because of his contention that he would not enmesh America in futile wars abroad. Starting off his first year as president by doing just that would hardly be calculated to restore his sagging electoral fortunes.