What Does Trump Believe Is America's Mission in Syria? 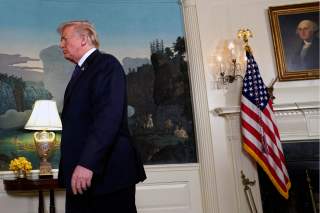 Last Sunday, President Trump tweeted, “Many dead, including women and children, in mindless CHEMICAL attack in Syria. President Putin, Russia and Iran are responsible for backing Animal Assad. Big price to pay.” Actually, there wasn’t. The western airstrikes on Syria were carefully circumscribed, avoided Russian assets and troops, and did little, if anything, to disturb Syrian dictator Bashar al-Assad. The strikes, which were apparently supposed to persuade Assad to focus on killing the opposition to him with conventional weapons, did not display western strength but caution.

This did not stop the hawks who support Trump from trying to place their own interpretation of events on the strikes against Syria. Sen. Tom Cotton thus suggested on April 13 that Trump had in effect put Iran and North Korea on notice: “The Butcher of Damascus learned two lessons tonight the hard way: weapons of mass destruction won't create a military advantage once the United States is done with you and Russia cannot protect its clients from the United States. President Trump ought to sustain the attacks if Assad doesn't learn these lessons, and Iran's ayatollahs and Kim Jong Un might want to learn the easy way. We thank our old British and French friends for once again joining us in defending the civilized world."

This is unpersuasive. Neither North Korea nor Iran is likely to be overly impressed by the western intervention. Assad remains defiant. The limited nature of the strikes suggests that the president--and above all Defense Secretary James Mattis--harbors little appetite for serious hostilities that might escalate into a wider war. Quite the contrary. For now, it is Mattis, not National Security Advisor John Bolton, who has the last word with Trump. Throughout, Mattis made it plain that he had no intention of triggering a potential World War III with Russia. Mattis noted, “I want to emphasize that these strikes are directed at the Syrian regime … We have gone to great lengths to avoid civilian and foreign casualties.”

At the same time, Trump declared “mission accomplished,” but he never really defined what the mission was supposed to be beyond punishing Assad. The highly moralistic language that Trump employed was straight out of the toolkit of George H. W. Bush and George W. Bush on the eve of their respective Iraq wars. Such moralism was part of a longer history of American demonization of foreign adversaries that often undermined its own foreign policy aims. As George F. Kennan observed in 1985 in Foreign Affairs, “American statesmen of the turn of the twentieth century were unduly legalistic and moralistic in their judgment of the actions of other governments. This seemed to be an approach that carried them away from the sterner requirements of political realism and caused their statements and actions, however impressive to the domestic political audience, to lose effectiveness in the international arena.” Consistent with his penchant for swerving hither and thither in foreign affairs, Trump suddenly began taunting Russia in his tweets: “Get ready Russia, because they will be coming, nice and new and ‘smart!’” Apart from such schoolyard language, extreme emotionalism seems to dictate his actions. He employed quite sweeping language in his address on Friday to the nation about the strikes he had ordered against Syria. According to Trump, “What kind of a nation wants to be associated with the mass murder of innocent men, women, and children? The nations of the world can be judged by the friends they keep. No nation can succeed in the long run by promoting rogue states, brutal tyrants, and murderous dictators.”

The sentiment is understandable. But it could also be directed at the United States itself. Put aside America’s long history of supporting authoritarian regimes in Central and South America. Does Trump propose to break relations with the Philippines, Egypt and Saudi Arabia?

The truth is that Russia’s and Iran’s promotion, to use Trump’s term, of Assad has worked. Their influence in Syria is at its apogee, much to the distress of Israel. The western strikes have more to do with dramaturgy than military strategy.

This probably should not come as much of a surprise. On Sunday, Trump tweeted, “The Syrian raid was so perfectly carried out, with such precision, that the only way the Fake News Media could demean was by my use of the term 'Mission Accomplished,' I knew they would seize on this but felt it is such a great Military term, it should be brought back. Use often!" But what is America’s mission?