What Does Trump Really Think about U.S. Alliances? 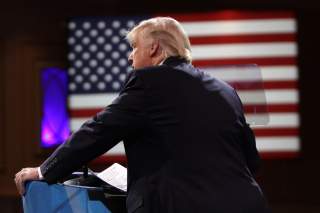 Conventional wisdom about what sustains America’s security at the most fundamental level has not changed much in seventy years. In fact, for a hundred years or so, we understood that if another country achieved hegemony in Europe or Asia, it would eventually mean trouble for the United States. We fought two wars to prevent that from happening. Then, with the arrival of nuclear weapons, and ballistic missiles decades later, we also came to understand that a real defense of America was no longer possible and that we would have to depend upon deterrence instead. We still do.

These two pillars of our national security—one a matter of geography, the other one of technology—have been taken for granted among policymakers, scholars and commentators for so long that it has been hard to believe that discussion of our foreign policy would now proceed based on some other set of assumptions about our most basic interests. This does not seem to involve the continuing debate between realists and idealists, where the latter would extend America’s interests to include, for example, the advancement of democracy or the protection of human rights around the world, at times requiring the use of force. No: the emerging fissure separates those who do not see vital American interests in economic and political access to countries in Europe and Asia, and do not appreciate America’s vulnerability to any country with intercontinental ballistic missiles, from those who do. It is closer to the classical debate between isolation and “entanglement.”

It has been jarring for the foreign-policy establishment to hear the NATO alliance and America’s bilateral alliances with Japan and the Republic of Korea discussed in monetized, transactional terms, when the conventional wisdom would have them based solidly in mutual self-interest, resting on cultural, historical and political grounds. Indeed, those alliances emerged after the Second World War so that we would not have to fight a third, to stop another country from dominating a substantial portion of the world’s productive capacity. “Burden sharing” is always a topic for discussion among allies, but great care had always been taken to avoid undermining the credibility of the alliance, and therefore its purpose, by suggesting that the bond, for which the nation would go to war, was for sale. Credibility is the key word here, and it is affected by capabilities and intentions—the latter, in turn, assessed in part by what American leaders say. Words matter a great deal here.

It has been just as remarkable to hear references to nuclear weapons that reflect no appreciation for American vulnerability. Neither our country nor any other can defend against a sophisticated attack by nuclear-armed ballistic missiles, and so we have always depended upon the promise of retaliation to deter an attack. Our defense, therefore, depends on psychology, and correctly assessing other leaders’ risk propensities, values and rationality, as well as our ability to credibly threaten a retaliatory strike. Once again, the words of our leaders, particularly our president, really do matter to our defense.

Now, with just a bit of reflection, it should become clear that the pillars of American national security, geographic and technological, are connected—that our alliance commitments depend in large part on our ability to credibly extend our deterrence to our allies, especially when we and they confront an adversary with nuclear weapons, and ballistic missiles with which to deliver them. Right now, such potential adversaries include Russia and China, and soon will likely include North Korea and, if the nuclear deal does not hold, Iran as well.

It is possible, of course, that the new administration does not embrace the conventional wisdom that has informed its predecessors for so many decades, and is prepared to adopt a “fortress America” posture. If so, a robust debate on the wisdom of that course is in order, taking account of the implications for our allies in Europe and Asia, as well as the Middle East, and most important, for the future economic and political health of the United States. If the new administration wishes to chart an isolationist course, we should certainly expect the number of countries pursuing nuclear-weapons development programs worldwide to increase substantially, and American influence to decline just as precipitously. Entangling alliances have their costs and benefits.

At the very least, what we need now is a moratorium on loose talk about matters that go to the heart of the nation’s security, and instead a real and open discussion about America’s place in the world.

Robert Gallucci is a Distinguished Professor in the Practice of Diplomacy at Georgetown University.