What Ending the Uzbek Cotton Boycott Means for Central Asia 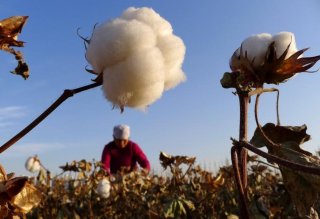 The war in Ukraine has prompted the former Soviet republics to alter their economic and diplomatic ties with Russia, signaling that they are not clients of Moscow. The Central Asian states, in particular, must urgently find alternative markets for their products, which will shield them from Russia’s impending economic collapse and also protect them from becoming overly dependent on China.

The recent decision to lift the global boycott on cotton from Uzbekistan came just in time for the country to reenter world textile markets as the effect of sanctions against Russia became palpable in Central Asia. Russia is still Uzbekistan’s primary trade partner and the largest importer of Uzbek cotton, buying over 158 million cubic meters of cotton fabrics annually. But, with its financial system crippled by sanctions, rising inflation, and consumer markets likely to shrink, Russia’s trade with Uzbekistan will change too.

Washington should consider adopting policies to support and accelerate this process of distancing from Russia. Lifting the temporary suspension of the Generalized Scheme of Preferences, a duty-free trade regime for developing countries, will open the U.S. market for goods from Russia’s neighborhood, including Uzbek textiles. This step would be fully aligned with the United Kingdom and European Union’s decisions to accept Uzbekistan as a beneficiary of the special Incentive Arrangement for Sustainable Development and Good Governance (GSP+) last year.

In addition, repealing the archaic Jackson–Vanik Amendment, adopted in 1974 to facilitate Jewish emigration from the Soviet Union by restricting trade, could become another incentive that enables normal trade relations treatment to the Uzbek goods. Jackson-Vanik was lifted in relation to Russia but is still applied to friendly countries like Uzbekistan for no reason.

Uzbekistan’s successes in eradicating child and forced labor in cotton cultivation were recognized by the Cotton Campaign, an alliance of human rights nongovernmental groups, trade unions, and business associations, which in March 2022 called for the international boycott on Uzbek cotton to be lifted. This has opened the door for 331 international brands and retailers, which joined the pledge not to source cotton from Uzbekistan twelve years ago, to return to the Uzbek cotton market. Major brands such as Adidas, Tesco, IKEA, Marks & Spencer, H&M, Zara, and Gap are expected to resume sourcing Uzbek cotton. The Uzbek cotton industry is also reforming, aiming to create more higher quality and salaried jobs.

Cotton is nicknamed “White Gold,” as it generates a major part of Uzbekistan’s export revenues, constituting 12 percent of GDP. Uzbekistan is the world’s sixth-largest cotton producer, accounting for 4-5 percent of global cotton production and 10 percent of global exports. It yields 1,106,700 tons of cotton annually and brings approximately $1.3 billion to the Uzbek economy each year. Cotton is integral to the Uzbek economy, making reforms in this sector fundamental for broader economic reforms.

As The Cotton Campaign’s co-founder Bennett Freeman stated, Uzbekistan has implemented historic reforms necessary to end forced labor and transform Uzbekistan’s cotton sector. However, arriving at this point was not easy. The effort to leave the past started with a decree in 2012 by the then-prime minister and now president, Shavkat Mirziyoyev, which banned child labor in cotton harvesting. Shortly after becoming president in 2016, he frankly admitted his country’s problems with child labor at the United Nations General Assembly in 2017. While child labor was soon eliminated, forced labor during cotton harvests remained a problem. Two years ago a presidential decree abolished the state regulation of cotton production and mandatory sales plans, ending all enforced labor practices and reforming the cotton industry.

According to the International Labor Organization (ILO), external pressure was not the primary reason for transforming cotton production. The critical motivation was to create jobs and shift Uzbekistan’s position from an exporter of raw cotton to a producer and a manufacturer of textiles and garments. This means moving the country up the value chain, boosting the economy, and creating jobs. Progress was the result of government-led reform, in collaboration with local entrepreneurs and labor organizations, that included not only discarding state quotas, but also significantly raising the wages of cotton pickers. Higher pay made seasonal jobs more attractive and resulted in a dramatic increase in the number of people interested in working in the cotton industry. The return of migrant workers from neighboring countries, first due to the Covid-19 pandemic and now the war in Ukraine, has only accelerated these processes.

One of the most important structural changes in the cotton industry came from creating regional clusters to buy the harvest directly from farmers and process the raw material into textiles, instead of selling raw cotton for a much lower price on the international market. Clusters are also bringing modernization and foreign direct investment into Uzbekistan. American company Silverleafe initiated automated cotton production technologies in the Dzhizzak region and introduced the first Pulsar irrigation technology in Central Asia. “This modern irrigation system leads to 40% water savings,” according to Mississippi-born Dan Patterson, Silverleafe’s general director.

Decentralization also created conditions for bargaining between cotton pickers and buyers which resulted in higher wages. “The payment for 1 kg of hand-picked raw cotton in 2021 has been increased by almost 10 times compared to 2015,” according to Tanzila Narbaeva, the chair of Uzbekistan’s Commission on Combating Human Trafficking and Forced Labor.

While an important milestone has been achieved, international labor organizations are now demanding that the cluster system, while effective, must be further democratized by allowing the establishment of independent trade unions and professional associations.

Uzbekistan will continue its cooperation with the ILO to create more higher-paying jobs through its second Decent Work Country Program for 2021-2025. The program sets out to improve the legal framework governing labor relations, expand employment opportunities for youth, women, and vulnerable groups, and strengthen social dialogue and the institutional capacities of social partners. As veteran Uzbek human rights activist Shukrat Ganiev points out, people in Uzbekistan need jobs with decent wages and good working conditions. “To get there we need international brands and retailers to engage in responsible sourcing from Uzbekistan.”

Washington can support Uzbekistan as a preferred cotton supplier as buyers turn away from China due to forced labor concerns in Xinjiang, playing a key role in stabilizing the supply chain of American textile apparel companies. A more economically prosperous Uzbekistan plugged into the global economy would further improve the country’s human rights while enhancing regional security and shielding Central Asia from unwelcome Russian and Chinese inroads.