What Is Europe Doing to Stop the Islamic State? 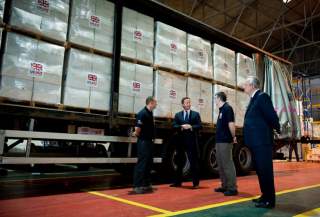 On August 13, 2014, Benjamin Rhodes—President Obama’s Deputy National Security Adviser—made news when he told a collection of reporters traveling with the president on Martha’s Vineyard that the Obama administration was prepared to increase military support to the Iraqi Government once Prime Minister-designate Haider al-Abadi was able to form a new cabinet. In fact, not only would Washington be willing to continue its aerial campaign against militants from the Islamic State (IS), but it would also be open to the idea of using helicopters and U.S. ground forces to facilitate the evacuation of thousands of Yazidi civilians trapped on top of the Sinjar Mountain.

Fortunately for the administration, this option is no longer required. After an assessment conducted by U.S. personnel who were flown onto the top of the Sinjar mountain, the Defense Department concluded that a humanitarian evacuation was “far less likely,” due to the effective combination of U.S. airpower and a Kurdish peshmerga counterattack. Yet the fact that the White House was willing to place “boots on the ground” in harms way in order to save thousands of men, women and children is a vivid example of just how important the United States remains to the safety of people half a world away.

If America is willing to step up its activity—an additional 130 U.S. advisers were dispatched to Irbil on August 12—it’s also appropriate to ask what America’s allies and partners in Europe are willing to do in order to help alleviate a dire situation that would have turned calamitous without targeted U.S. intervention.

The European continent as a whole, it’s fair to say, is not doing as much as it should considering the situation. The European Union, thanks to its bureaucratic bylaws of needing an absolute consensus before taking concrete action, is divided about what to do: that is, how much Europe should donate, whether it should send in aircraft of its own and what type of assistance the continent should provide. The EU’s Political and Security Committee left open the option on August 15 of its member states sending ammunition and arms to the Kurdish peshmerga holding the northern line. But even that decision, while welcome, masks one critical fact: only several European states are following that policy.

So what has Western Europe done thus far for Iraq? Only the contributions of three states—Great Britain, France and Germany—are meaningful enough to mention openly. The rest are either limiting their involvement to diplomatic statements or sending such a small amount of monetary assistance that it’s easy to lose track of.

Great Britain: Prime Minister David Cameron cut short his summer vacation by a day in order to confer with his advisers and ministers on the Iraq problem. After meeting with his team, his office put out this statement, which the United States has been sure to highlight, given the fact that London is mobilizing its own military and using its own aircraft to drop

much-needed supplies to the thousands of Yazidis who remain stranded on the mountain:

“The Prime Minister has tasked officials to identify what more can be done to strengthen the existing refugee camp in Dahuk so that it can cope with the influx of refugees that are now heading there. We are also providing funding to the International Rescue Committee for their refugee camp in North East Syria, where around 12,000 people have already sought refuge after fleeing the Sinjar region. For those still trapped on the mountain, 2 C130s delivered 23 tonnes of aid last night, providing people there with 13,200 litres of clean water in reusable water containers and 528 shelter kits to provide shade in temperatures of over 40C. We will continue these deliveries in the coming days while we firm up plans with our partners to get these people to safety, including the role that Britain will play.”

To some, like Col. Tim Collins and Gen. Sir Mike Jackson—Britain's former Chief of the General Staff—this is the bare minimum that the British government could do. “Britain helped create Iraq in 1920 and we have a moral responsibility to help,” Collins wrote in an op-ed piece for The Daily Telegraph. “We have used the Kurds as a public convenience for too long, now their backs are against the wall and we’ve got to support them.”

Legitimate criticism notwithstanding, this is still much more than what many countries in Europe are willing to expend.

France: President Francois Hollande is going a step further than his British counterparts: authorizing the delivery of weapons to peshmerga forces that are tasked with defending Irbil and single-handedly cleaning up the Iraqi military’s mess. “In order to respond to the urgent needs expressed by the Kurdistan regional authorities, the president has decided, in agreement with Baghdad, to deliver arms in the coming hours,” Hollande wrote in an August 13 statement.

In more tranquil times, this decision would go against the “one unified state” policy that the United States has promoted in Iraq since deposing Saddam Hussein in 2003. But there is anything but tranquility in Iraq today: the Iraqi army collapsed in June to a far smaller IS force, and further south, car bombs continue to rock Shia neighborhoods in Baghdad. All of this has prompted Washington to reconsider its “one Iraq” policy, at least when it comes to arming one of its strongest partners inside of Iraq.

France's delivery of weapons, therefore, will complement an objective that the United States—with the acceptance and cooperation of the central government in Baghdad—is trying to meet: ensuring that the Kurds have the ammunition, equipment, and firepower they need to prevent IS from destabilizing Irbil.

Germany: The Germans have pledged $32.2 million in humanitarian aid to the internally displaced in northern Iraq. Anything beyond monetary donations would be out of the ordinary for the German government, which has been and remains a cautious European power on the subject of intervention and in the realm of foreign policy in general (in 2003, Germany was vocal in its opposition to the U.S. invasion of Iraq). Berlin is likely hoping that its status as the continent’s economic powerhouse will allow it to contribute in a meaningful way, without having to provide German personnel to what could be a dangerous and logistically complicated evacuation or counterterrorism mission.

Would the United States like to see more from its Western European partners? The answer to this question is probably “yes.” The United States, as usual, is doing the heavy lifting—providing the assessment teams, putting U.S. personnel on the ground in a dangerous environment—and is the only power conducting offensive operations on fixed IS positions, such as armored vehicles, mortar positions and convoys. President Obama will not provide any hint of this dissatisfaction in his public remarks, but one can expect that he is requesting additional assistance in his private conversations with European leaders.