What to Expect in a Postwar Syrian ‘Assadistan’ 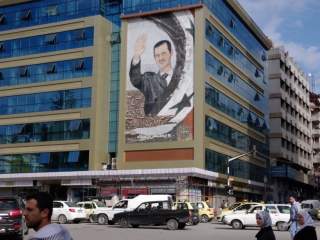 President Assad of Syria and his backers took control of the political situation in Syria by turning the tide in their favor on the battlefield. It appears more likely than ever that the Assad regime is here to stay on at least some Syrian territory, and Western leaders seem to be warming up to the idea. So how did the Syrian president improve his appeal after murdering hundreds of thousands of his own citizens? And what would a post-war Assadistan look like?

The president of Syria, who has dealt with his people so brutally that he has become an advertising tool for Sunni jihadists, has rehabilitated his image in the West in two ways.

First, the Syrian regime and its backers declared all opponents of the regime to be Sunni “terrorists” and then turned them into terrorists. At the outset of the Arab Spring, Assad’s media outlets decried opponents of the regime as religious radicals while security forces took ruthless action against them (and released jihadist radicals from prison to co-opt the uprising) in order to radicalize opposition groups. Initially, most Western observers dismissed the early labeling of rebels as terrorists to be little more than regime propaganda.

The rise of ISIS has changed everything. The relative appeal of the actors in the Syrian civil war was no longer evaluated on democratic tendencies and Western orientation, as the United States and its allies realized the urgency of the threat and could no longer depend on the success of small programs to vet and train a few dozen troops. They needed to consider which groups had both the desire and the ability to beat ISIS. The fact that in many senses Assad’s sectarian policies and brutality had created and fueled ISIS was ignored in favor of the short-term need to defeat the latter. Likewise, pragmatic local cooperation between Assad and ISIS in electric plants and oil refineries was overlooked in favor of highlighting the ideological clash between the Baathist Alawite regime and the Salafi jihadi rebels (after all, when have we ever seen cooperation like that before?). Thus, the Assad regime and its Shia backers seemed like perfect partners to fight radical Sunni groups that posed a growing threat to Western interests at home and abroad.

In the context of ISIS, it was only too easy for Putin to act as Assad’s hype man. At the United Nations General Assembly in September the Russian president said, “We think it is an enormous mistake to refuse to cooperate with the Syrian government and its armed forces, who are valiantly fighting terrorism face to face.” Putin has repeated variations of this propaganda piece countless times, though John Kerry claims the Russians disproportionately targeted legitimate opposition groups. Yet, somehow it even seeped into the intelligence community’s 2016 Worldwide Threat Assessment explanation that “Moscow's growing concern about ISIL and other extremists has led to direct intervention on the side of Bashar al-Asad's regime and efforts to achieve a political resolution to the Syrian conflict on Russia's terms.”

Second, Assad made non-jihadist opposition groups seem incompetent. Since the outbreak of the full-blown civil war, the regime’s strategy has been to prevent rebel groups from achieving any sort of success in providing services that would legitimize them as alternatives to Assad and ISIS in the eyes of the Syrian people and the international community.

In eastern Aleppo in 2013, the opposition established a functional government with the help of local and provincial councils. The regime-held areas of the city emptied as Syrians flocked to rebel territory. Seeing this threat to his positioning as Syria’s most effective ruler, Assad did not launch an invasion or air strike on military targets, but indiscriminately rained down barrel bombs that made eastern Aleppo unlivable and caused hundreds of thousands to seek refuge elsewhere.

The story of eastern Aleppo is not an isolated incident, but rather is part of a strategy that targets civilian populations and infrastructure in rebel-controlled areas. Assad's forces have a clear pattern of attacking non-military institutions that meet basic needs like healthcare and food supplies. Without stating the obvious, it is clear that Assad’s strategy has worked and the Syrian regime and ISIS remain the only two forces with any proven ability to govern.

This two-pronged strategy has frustrated U.S. and EU hopes for Syria's future, and Western leaders have demonstrated a growing willingness to accept continued Assad’s rule if it ends the conflict and serves as an ally in the fight against terrorism. In December 2015, Secretary of State John Kerry said that the United States was not committed to regime change in Syria. Several months later, the International Syria Support Group (ISSG) released a statement that “reaffirmed that it is for the Syrian people to decide the future of Syria,” which has an ambiguity about Assad that makes the message crystal clear. Unless there is a concerted effort to push him out, a dictator that has the stomach for five years of mass murder and destruction will not leave office because of an election.

Assuming that the fragmented pieces of pre-2011 Syria cannot be put back together, as most do, Assad's domain will probably extend along eastern Syria from Deraa in the south to Latakia in the north, and will include the cities of Aleppo, Hama, Homs, Tartus, Quneitra and Deraa, as well as most of Damascus. This contains most of the major population centers, though not the majority of territory of Syria, as much of the western region that is now controlled by ISIS is desert.  As of early last year, the regime controlled somewhere between 55 and 72 percent of the remaining Syrian population, but this number could drop in the case of a ceasefire as Assad would no longer be at liberty to barrel bomb and wreak havoc in opposition-held areas.

As for repression, post-war Assad will probably make pre-war Assad look like a dandy. If there is anything worse than a dictator who feels invincible, it is a dictator who is afraid of his own shadow. President Sisi of Egypt is a prime example of what to expect. In a few short years, the Sisi regime has jailed around 40,000 people and killed hundreds for political reasons. Also, it is worth noting that Sisi targets all potential sources of dissatisfaction with his regime, from members of the Muslim Brotherhood to academics and journalists. With an even better reason to fear for his life and his proven ability to kill en masse, it is safe to assume that Assad will respond with extremely brutal force any time someone so much as mumbles a complaint.

The coherence of pro-regime forces, composed of numerous militias in addition to the Syrian Arab Army, is another major question mark. Two journalists reported of their trip to Syria that nearly everything was controlled by militias and they "barely saw anything of the regular army." The National Defense Forces (NDF) is the largest of these groups and is organized by the Iranians based on the Basij model. Other militias vaguely referred to as "Shabiha" are more like criminal networks that have vested financial interests in the regime and serve as its enforcers.  Will Assad's tattered forces be able to control these armed groups once the war ends? Will the NDF serve Assad's or Iran's interests when the two diverge? In 2013, a Syrian official predicted discord from within pro-regime militias saying, “After this crisis, there will be a 1,000 more crises—the militia leaders. Two years ago they went from nobody to somebody with guns and power. How can we tell these shabiha to go back to being a nobody again?” A July 2015 report from the blog Syria Comment notes that there has already been some fighting among pro-Assad militias.

On the economic front, things hardly look any better for the future of Assad's Syria. First, a UN report from 2014 noted that it would take Syria at least 30 years to return to its economic level of 2010. However, this report was published several years ago and the Syrian infrastructure and economic institutions are in even worse shape now. Second, the Assad regime is unlikely to regain control of the Syrian desert which is where the Syrian oil fields are located—meaning that it will miss out on an important source of revenue (albeit one that is less valuable as of late). This dismal economic forecast will hardly improve upon the already precarious position of the regime among the Syrian people.

With such grim prospects for Assadistan, the regime hardly seems to be a choice for stability that its backers have framed it as. It is likely that the Syrian regime will deal ruthlessly with the instability caused by the dismal economic situation and the diffusion of weapons and power to local militias. If Sisi's Egypt is any indication of what to expect, ramping up repression will not serve to crush the uprising in any meaningful sense as much as it will fuel the rebellions of the future.