What to Expect from Putin’s Fourth Term 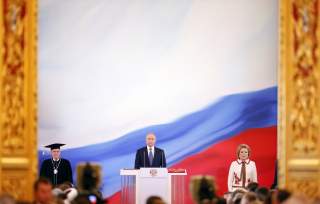 Moscow was the scene of two elaborate celebrations this week. On May 7, Vladimir Putin took the oath of office in the Kremlin for his fourth term as president, describing Russia as a “country of magnificent victories and accomplishments” and vowing to “do everything to build up Russia’s might, prosperity and glory.” On May 9, Russia commemorated the victory over Germany in the Great Patriotic War with a massive military parade that showcased the latest hypersonic missiles, tanks and drones. Putin warned in his speech against those trying to rewrite history or to claim exceptionalism, as had the Nazis.

But now that the pageantry is over, what should we expect from Putin’s fourth term? So far, the signs point to continuity both in personnel and policies. Dimitri Medvedev will remain as prime minister, an arrangement that clearly suits Putin. There may well be some reshuffling of government positions, and rumors abound, but few officials in the Putin system are ever fired; they just rotate to different positions. Rumors have for some time suggested that Foreign Minister Sergei Lavrov is ready to retire, but he in the past has been persuaded to stay in his position.

There have also been suggestions that Alexei Kudrin, who was finance minister from 2000–11 and who was named Finance Minister of the Year in 2010 by Euromoney (before he had a falling out with Medvedev) may return with a portfolio that would include promoting economic relations with Europe and the United States. Kudrin is an economic liberal who insists that Russia must diversify its economy and introduce structural reforms, and he insists that it needs to improve ties with the West if it wants to prosper. He has blamed the government’s short-term thinking for retarding economic progress. It is not clear, however, how committed Putin is to economic reforms because attempts during in his previous terms in office have petered out.

Putin gave hints about what the program for his fourth term would be in his Poslanie –a State of the Nation Speech—on March 1. The first half of the speech was a discussion about the state of the Russian economy, with promises to reduce poverty, raise the standard of living, provide more jobs and increase growth rates. These are now enshrined in his May 7 Executive Order on National Goals and Strategic Objectives through to 2024. They include raising life expectancy from its current seventy-two years to seventy-eight years; cutting poverty in half; speeding up the introduction of digital technologies, and making Russia the fifth largest economy with growth rates exceeding international rates. Putin has also said that Russia will become the leader in artificial intelligence.

These goals are indeed ambitious and probably not attainable. The Russian economy has certainly survived the economic crisis of 2014–15, when a combination of low oil prices, structural deficiencies and Western sanctions hit the economy hard. But prudent financial policies and the beneficial impact of Russia’s countersanctions on European agricultural imports, which have stimulated the growth of Russia’s own agricultural sector, have enabled the economy to begin to grow again. With rising oil prices, growth should continue; but as long as Russia remains primarily a hydrocarbon and raw-materials exporter, its ability to modernize will remain limited.

The second half of Putin’s speech might give some hints about foreign policy in his fourth term. Putin rolled out Russia’s new generation of nuclear weapons designed to destroy those of the United States. A video animation showed a new, improved Intercontinental Ballistic Missile (ICBM) taking off from Russia, flying over the South Pole, evading detection by U.S. missile defenses, reaching south Florida and deploying multiple warheads on a target that looked suspiciously like Mar-A-Lago. Putin went on to describe four new super-weapons that Russia was developing, including a nuclear-armed cruise missile and an intercontinental undersea drone. Accusing the West of not taking Russia seriously and ignoring its interests, he assured his audience that the United States could not defeat Russia in a military conflict. The advanced weapons on display on May 9 were no doubt meant to reinforce that message. Given the new U.S. National Security Strategy and Nuclear Posture Review, both of which name Russia as an adversary and commit the United States to modernizing its own nuclear arsenal, Putin has clearly signaled that Russia intends to continue building its own military capacity.

In his fourth term, Putin will likely focus on Russia’s relationship with China as Moscow’s major global partner. The strengthening of the partnership with Beijing post–Crimea was one of the major successes of his third term in office. Russia will also seek to solidify its position as the major great power in the Middle East, viewed by the Sunni and Shia states—and Israel—as the only player that can talk to all sides and takes a nonideological approach to the region. It will remain preoccupied both with negotiating an end to the war in Syria and with finding partners for the reconstruction of postwar Syria. Putin will no doubt seek to strengthen Russia’s position in the Middle East as the Trump administration lessens the United States’ presence in the region.

Russia’s relations with its neighbors will remain a priority. The Ukraine conflict is now into its fourth year and it is unclear whether Moscow is seriously interested in resolving it, but negotiations continue. The Kremlin’s restrained reaction to the recent “velvet revolution” in Armenia indicates that it will tolerate a popular uprising in an allied neighbor as long as Yerevan does not seek to move westward. A possible succession in Kazakhstan—one third of whose population is Slavic—during Putin’s fourth term could create unforeseen tensions between Russia and another of its close regional partners.

Relations with Europe and the United States are likely to remain strained as long as the Ukraine conflict continues and Western governments push back against Russian interference in their domestic politics. Presenting the West as the main enemy out to weaken Russia has shored up Putin’s domestic popularity and would not be abandoned unless there were substantial benefits from doing so. Nevertheless, there have also been signs over the past year that the Kremlin is open to an “off-ramp” with the United States, and Putin has refrained from criticizing President Trump while he excoriates American policies.

As Putin begins his fourth—and constitutionally last—term, the issue of succession will inevitably hang in the air. By the end of his term, he will have been in power for a quarter century. He has seen U.S. presidents and other world leaders come and go. Will he begin to groom a successor? Will the constitution be changed to enable him to stay in power beyond 2024? Russia has experienced three “managed” transitions since 1991—from Yeltsin to Putin, from Putin to Medvedev and from Medvedev back to Putin. Putin’s next move on this issue will continue to be a subject of speculation as he embarks on his new term.

Angela Stent directs the Center for Eurasian, Russian and East European Studies at Georgetown University. She is the author of The Limits of Partnership: U.S-Russian Relations in the Twenty-First Century.