What Explains the Escalating Tensions in Ukraine? 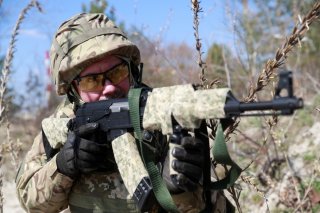 Tensions are rising ominously in eastern Ukraine. Fighting has surged along the line of contact between Ukrainian government forces and Russian-backed separatists. Kyiv has cracked down internally on perceived Russian sympathizers. Russia has moved thousands of troops near the border with Ukraine, prompting Kyiv to turn to NATO with calls for support. Many are painting the situation as an early test of the Biden administration’s mettle.

What is behind the surge in hostility between Moscow and Kyiv? How likely is full-scale warfare between Russia and Ukraine? And what is at stake for the United States?

George Beebe is Vice President and Director of Studies at the Center for the National Interest. A former director of Russia analysis at the Central Intelligence Agency, he is author of The Russia Trap: How our Shadow War with Russia Could Spiral into Nuclear Catastrophe.

Keith Darden is an associate professor at American University’s School of International Service with expertise in both Ukraine and Russia. His forthcoming book, Resisting Occupation in Eurasia, assesses the development of durable national loyalties in Ukraine and elsewhere in Eurasia.

Melinda Haring is a Deputy Director of the Atlantic Council’s Eurasia Center and former editor of its UkraineAlert publication. She is the vice-chair of the board of the East Europe Foundation in Kyiv, a member of the supervisory board of the Right to Protection NGO in Ukraine, and a senior fellow at the Foreign Policy Research Institute.

Dov Zakheim, Vice Chairman of the board of directors at CFTNI, will moderate.