What Fiona Hill Tells Us About Trump 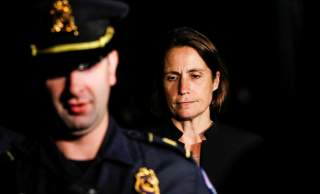 The explosive House testimony this week by former National Security Council aide Fiona Hill, a key former deputy to former national security advisors H. R. McMaster and John Bolton, was a key development in the Ukraine scandal engulfing the Trump White House. Hill relayed that John Bolton was deeply concerned by machinations in Ukraine being undertaken by unofficial advisors to the president, namely former New York mayor and Trump attorney Rudolph W. Giuliani. “I am not part of whatever drug deal [EU Ambassador Gordon] Sondland and [White House chief of staff Mick] Mulvaney are cooking up,” Hill said Bolton remarked. Hill took aim, in particular, at Sondland, whom she classified as a “security risk.” Sondland is something of a Johnny-come-lately to diplomacy.

Hill’s testimony was hailed on much of the Washington foreign policy circuit. Her admirers noted the length of the testimony. Tom Wright of the Brookings Institution, where Hill directed the Center on Europe and the United States until joining the administration, tweeted earlier this week: “Hour ten now. In awe of Fiona’s stamina and strength.” But how is it that an establishment figure such as Hill ever became a member of the Trump administration in the first place?

A former senior National Security Council official tells the National Interest that Hill “was a total pro” but “hated the sight of Trump.” Another former senior official on the National Security Council confirms that she was “the consummate professional, very easy to get along with, never made waves” and wryly notes that she had “impeccable timing” in resigning from the White House earlier this summer before Trump’s phone call with Ukrainian president Volodymyr Zelensky. Her tenure in the administration offers a striking example of how Trump’s inattention and indifference to the staffing of his administration has come to haunt him as congressional Democrats pursue an impeachment inquiry that is doing real damage to him and his presidency.

He approached the hiring of senior staff as a businessman would, plucking individuals from rival companies without ever considering the political context. He never, in other words, pondered a few basic questions. Were his hires compatible with his own self-professed desire to alter radically American foreign policy? Or was he creating time bombs that were bound to go off, particularly given his often-open disdain for his staffers?

Unlike Richard Pipes, who supervised her dissertation at Harvard, Hill has never been overtly ideological. Pipes, who was a brilliantly talented scholar, served as Ronald Reagan’s adviser on Russia on the National Security Council and played a role in devising the administration’s early drive to push the Soviet Union to the brink militarily and economically. After he left government, Pipes wrote a book, Survival Is Not Enough, outlining his hardline views. Jack Matlock, who enjoyed a distinguished career in government service, also served on Reagan’s national security council as a Russia adviser. He, too, had strong views on Russia which differed from those of Pipes. But he shared a common bond—loyalty to the president.

Hill, by contrast, did not have particularly marked views on Russia. She has well-grounded expertise on Russia and was originally recruited to work on the National Security Council by Lt. Gen. Michael Flynn and K. T. McFarland. A Russia scholar who knows Hill well notes that Trump and his top aides seemed focused on respectability rather than ideological alignment. “No one, for example, from Sen. Rand Paul’s staff was tapped to work for these positions,” the scholar said. “Normally some key members of a Senator’s staff would migrate into the administration.”

As Hill had served as an intelligence officer for presidents George W. Bush and Barack Obama, she brought serious credentials to the job. She had also received acclaim for her book co-written with Clifford Gaddy on Vladimir Putin. It was called Operative in the Kremlin. It depicted Putin as someone who has “spent a great deal of time in his professional life bending the truth, manipulating facts, and playing with fictions. He is also, we conclude, not always able to distinguish one from the other.” A Russia scholar who knows her well observes that she was “not a Russia hawk, but a skeptic” and was urged to take the job by her establishment colleagues so that she could be “the adult in the room.”

She was a skeptic in an administration besieged from its early days by allegations of collusion with Moscow’s electoral interference in 2016. That background bolstered her standing, as the administration moved quickly to allay fears that it was compromised—piling on economic sanctions on Russian tycoons and Vladimir Putin’s government, and giving Moscow’s rivals, the government in Kiev, the heavy weapons that it had long sought but was previously denied by President Obama.

But Hill never played a leading role in determining policy. A former NSC official stressed that it was her ability to avoid the limelight and ability to work affably with her colleagues that provided a kind of protective coloration. As a former Obama State Department official and Russia expert observes, “Fiona was never a shaper of debate, she doesn’t have well-defined positions.” Instead, her role was to function in the “back of the room.” It served her well. Unlike many Trump administration officials, she lasted for several years and left on her own terms. She has become briefly famous, not for any of the policies she espoused, but for outing Trump and his aides for their machinations in Ukraine.

Will the staffing situation become any more hospitable to Trump’s views as he heads into the 2020 election? Her successor, Tim Morrison, views arms-control treaties as tantamount to American surrender. Trump's fourth national security advisor, Robert C. O'Brien, announced in the Washington Post this week the elimination of over fifty NSC officials. But while the government may be a bloated bureaucracy, the NSC is hardly the worst offender. Some administration insiders are concerned that O'Brien isn’t using the agency to staff up and credential officials more in line with the president's foreign policy preferences. As Trump grapples with the fallout from impeachment, he is discovering the costs of his cavalier approach to staffing his administration.

Curt Mills is a foreign affairs columnist at The National Interest, where he covers the State Department, National Security Council and the Trump Presidency.