What Happened to the Islamic State Foreign Fighters That Had Returned to Europe? 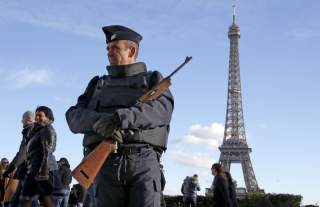 The media tend to be poor on covering things that don’t happen. There is, for example, a puzzle over whatever happened to all those members of Islamic State, or ISIS, who, trained in the Middle East, had returned to Europe and were poised to commit terrorist mayhem there. None, it appears, have shown up.

Alarm about the danger was raised in many quarters, but taking pride of place may well be an article by Rukmini Callimachi in the New York Times on August 3, 2016, about “a global network of killers” that ISIS had created and empowered.

It featured a huge picture on its front page of a German petty criminal who had joined Islamic State in Syria and then defected because, he said, he was put off by all the violence. The accompanying story covered most of the top half of the front page and then bled over to fill up two pages in the interior.

In a jailhouse interview, our thug eagerly and with seeming authority asserted that many ISIS fighters had returned to Europe and were poised to commit terrorist mayhem: “They have loads of people…hundreds definitely…living in European countries and waiting for commands to attack the European people.” The article also included confirmation of this claim by intelligence and defense officials who spoke on condition of anonymity.

Since then, as far as I can see, none of those hundreds of European “foot soldiers” (as the article calls them) have sprung into action. There had been attacks in Paris and Brussels by such returnees in the year previous to the article. And there have been some ISIS-related attacks in Europe since the article was published, but these have mostly been carried out by people who have simply been inspired by the group, and none has been by a returnee. Could there be an explanation for this remarkable non-event?

Last August, on the second anniversary of the article, I posed that query to a guy I know at the Times and suggested that perhaps a follow-up story might be appropriate. He thought it was a good idea, and sent it over to the foreign desk for consideration.

On September 12, the Times published an article, once again by Rukmini Callimachi, that may have been in response to my suggestion. It is entitled, “Why a ‘Dramatic Dip’ in ISIS Attacks in the West Is Scant Comfort.”

However, it entirely ignores the issue of the returnees. Instead there is a catalog, from sources exclusively deep within the estimable terrorism industry, about “Islamic State attacks” overwhelmingly perpetrated or planned by people who had no connection to ISIS except maybe an inspirational one. There is, for example, a lot of ink about a Canadian teen who is not only a nutcase, but suicidal and a long-time drug addict, and, according to his mother, was not on “antipsychotic medication” (as the article says), but refusing to take it.

The article does acknowledge that the number of terrorist attacks in Europe is down, but it alarmingly adds that the number of terrorism arrests (which it calls “attempted attacks”) in Europe was up. It concludes this means that “while the Islamic State’s capacity may have been diminished, its effort has not.” And it argues that the difference “is that law enforcement is increasingly foiling the plots.”

The number of terrorism arrests has gone up or stayed high, then, not because the terrorist or proto-terrorist pool is so deep or has expanded, but because the police in Europe have put far more effort into the quest. In particular, they are getting particularly good at trolling the internet where many hapless ISIS inspirees, like the Canadian teen, and other proto-terrorists bloviate, foolishly advertising their intentions on social media and in chat rooms inhabited by the police from the comfort of their cubicles. As the article notes, “Law enforcement agencies have increasingly been able to infiltrate this online universe, analysts say, sometimes lurking in the Islamic State’s chat rooms on Telegram, the encrypted messaging platform that is the group’s preferred medium.”

That is, the police are therefore probably not so much “getting better at stopping” plots as getting better at finding (and facilitating) embryonic plots to stop—ones that, earlier, would likely have never led to much but that would not have been uncovered.

Meanwhile, the mystery about the returnee non-event remains. Is it possible that returnees, or at least returnees bent on violence, don’t exist?

John Mueller is a political scientist at Ohio State University and a senior fellow at the Cato Institute.