What Happened to Puerto Rico’s Economy? 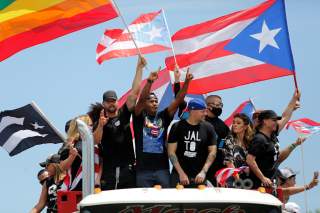 After weeks of protests in July, Puerto Rico has a new governor. And although this latest season of unrest was sparked by a series of misogynistic and homophobic texts from the now-former governor, dubbed “Ricky Leaks,” the people have been deeply upset with conditions in Puerto Rico for a long, long time. After all, most of Puerto Rico’s youth has grown up amid an economic crisis that has dragged on for multiple years.

What is the source of this chaos? Well, there are several factors at play. But one of the most devastating is easily the mismanaged pension fund for employees of the government—the biggest job provider in Puerto Rico.

Back in mid-2017, government coffers only had eight cents per dollar owed to its retirees. Combined liabilities of government-sponsored pension plans—which, other than its main retirement fund, the Employee Retirement System (ERS), includes smaller teachers’ and judicial retirement funds—were at an estimated $50 billion. Add that to an estimated $74 billion in bond debt, and Puerto Rico was forced to file the biggest bankruptcy in U.S. government history.

For years, Puerto Rico has failed to adequately fund ERS, which racked up a huge pension debt. Up until its collapse in 2017, Puerto Rico’s ERS was a system that guaranteed a certain income upon retirement. These kinds of pension funds are sponsored by an employer (in this case, Puerto Rico’s government) and are designed to be prefunded. Basically, what this means is that employee and employer contributions to the plan, together with the interest accumulated over the years, have to be enough to provide monthly checks to retirees.

But, as noted, Puerto Rico’s government has consistently failed to make the needed annual payments in full. As a result, it ran out of assets in July 2017 and has turned into a pay-as-you-go system—the most expensive way to fund retirement. With this method, there’s a lack of assets returns generated by the prefunded alternatives. So when using the pay-as-you-go system, plan sponsors are missing out on asset gains because they don’t invest in anything in the first place. Consequently, much more government revenue (such as taxes) would have to be spent to generate the same amount of retirement income.

Puerto Rico is not the only place that has defined benefit pension plans. In fact, most government employees, teachers, and first responders have similar plans across the United States. Some have struggled with their pension systems while others have been able to achieve positive reform. Unfortunately, Puerto Rico’s unique socioeconomic situation heavily influenced the default.

Here’s Why the Pension Problem Exists

The lack of pension prefunding does not necessarily mean imminent bankruptcy because retirement benefit sponsors or governments can write pension checks using tax revenue and other income. But in Puerto Rico’s case, benefit payments continued to grow in a time when there was a population and economic slowdown—key factors in assessing risk of bankruptcy. Puerto Rico’s population has been steadily declining since 2004 and is now at a forty-year low. As the population declined, the labor supply diminished, which led to economic decline.

So, as the pension payment burden gradually became a larger and larger share of overall expenditures, pension debt became a bigger problem.

In other words, there was simply not enough money in the pot to cover all of the country’s obligations, including pensions.

These factors—persistent failure to pay required contributions combined with population and economic decline—have led to the collapse of Puerto Rico’s pension fund, sending it spiraling into bankruptcy.

As a result, not only will there be no defined benefit plan for new employees, but the proposed changes mean cuts for retirees and significant changes for current employees. These people have been counting on a certain income and aren’t getting all of it. And, although the defined benefit portion of the plan was closed, the employer still has to pay benefits directly out of government income—or, in other words, taxes.

The moral of the story is that reckless pension fund management can have serious consequences for everyone with defined benefit pension plans in areas that are experiencing demographic shocks, like population decline. Currently, the city of Chicago, and states like Connecticut and Vermont, all battle some form of demographic problem and pension debt. So, if they don’t want to become the next Puerto Rico, then they’d better revisit their pension debt management.

After all, even in the case of bankruptcy, the problem of pension debt is not going anywhere. It only gets transferred to future generations. When it comes to pensions, running a pay-as-you-go system isn’t the best use of taxpayers’ money. Going forward, Puerto Rico could offer alternative solutions that would limit the liability of employers and provide retirement security for all future and current employees. But if they’re going to fix their system at all, they’ve got to do something about their pensions first.

Jen Sidorova is a Young Voices contributor and a policy analyst at the Reason Foundation. You can find her on Twitter @Jen_Sidorova.