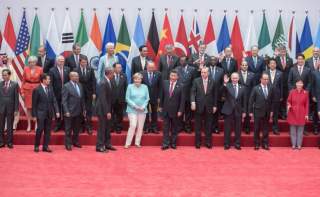 One photographer assigned to photograph the G-20 summit captured a telling moment on the stage in Hangzhou: Presidents Vladimir Putin and Recep Tayyip Erdoğan engaged in an animated conversation, while a pensive-looking German chancellor Angela Merkel (perhaps still processing the news of her party’s catastrophic electoral defeat in her home state of Mecklenburg–Western Pomerania) looks into the distance and President Barack Obama, standing on the other side of the group of leaders, displayed what appeared to be intense curiosity at what was being discussed between Putin and Erdoğan. (President Xi Jinping, as the host, radiated an expression of apparent satisfaction.)

The optics were not particularly positive for the president’s last G-20 summit—in marked contrast to the 2009 conclave in Pittsburgh. There, the U.S. president was at the center of attention, projecting an image of American global leadership in marshaling a response to the global economic crisis while laying the foundations of a more determined international effort to press Iran on its nuclear program that ultimately resulted in new sanctions, which ended up bringing Tehran back to the negotiating table. The Pittsburgh summit suggested that only the U.S. president could make the G-20 format work—bridging the gaps between the industrialized West and the rising East and south.

This time, Barack Obama’s “legacy” summit got off to a bad start when, after being forced to disembark from a different door of Air Force One than the traditional one used for photo ops, his National Security Advisor got into a shouting match with Chinese officials. Instead of traveling to China with two major free trade pacts well in hand, designed to make America the indispensable keystone between the Euro-Atlantic and Asia-Pacific blocs, his signature item for the rebalance to Asia—the Trans-Pacific Partnership—lingers on political life support, while the Transatlantic Trade and Investment Partnership is all but dead in the water. A landmark climate change accord was promulgated only on the shaky basis of executive authority as opposed to Senate ratification, opening up the possibility that a future U.S. president will not honor its commitments.

On a variety of longer-term issues, the preference of other leaders at Hangzhou was to adopt a wait-and-see approach, beginning with who will occupy the Oval Office come January 2017. There was a palpable sense that any commitment that Obama might make at this meeting would have a clear expiration date—and that either of his successors would not feel bound by any promise he might proffer.

There was hope that the G-20 might prove to be the backdrop for a joint Russian-American effort on ending the fighting in Syria. Indeed, at one point it appeared that two podiums were being set up for an announcement by Secretary of State John Kerry and Foreign Minister Sergey Lavrov. But the sideline meeting between Putin and Obama was unable to resolve remaining differences over the mechanics of a possible new cease-fire, or the continuing gaps in trust between the two sides.

This is because Moscow sees no reason to “rescue” American policy in Syria, which suffered a major setback once Turkey shifted gears to viewing the Kurds, rather than the Bashar al-Assad regime, as its primary national-security threat. The Kurds, who have been America’s most stalwart local allies in the fight against Islamic State, now find themselves targeted by Turkey and other Sunni Arab rebel groups (some of them, in turn, also supported by the United States). Nor is Moscow particularly bothered by the optics of the humanitarian catastrophe unfolding in Aleppo, seeing it as a consequence of the continued intransigence of opposition groups not to negotiate a settlement with the Assad government. Indeed, given the momentum of the Syrian government offensive, a cease-fire to permit the delivery of aid at this time would affect the timeline under which Russia, Iran and the Syrian regime are operating, changing the facts on the ground as much as possible, prior to the arrival of a new U.S. administration that might be more inclined to take more decisive action, so as to raise the costs for any future intervention. (In a way, it follows the playbook set by the Obama administration with regard to Darfur: highly critical of the Bush administration’s inaction during the campaign—including calls for U.S. military intervention—but accepting the reality of Sudanese control in Darfur once in office by arguing that it was now too late to do anything.)

Indeed, it is difficult to see any concrete results from this summit at all. The idea that the G-20 represents a mechanism for the key leaders of the world to caucus and find solutions to pressing global issues seems long gone. While this conclave of global chief executives was gathered in Hangzhou, North Korea went ahead with new ballistic missile tests; talks on Ukraine between Putin and Merkel, and Putin and French president François Hollande, went nowhere; encounters between Obama and Xi, and Xi and Japanese prime minister Shinzo Abe, did not bring pressing disputes in Asia any closer to resolution. The Australian has opined that the G-20 had “nothing to show from world leaders.” And while Obama’s last G-20 was not quite the legacy item he might have hoped for, no one emerged to fill in the vacuum. Hangzhou may be the strongest validation of Ian Bremmer’s prediction that we are moving towards a “G-Zero” world.