What Happens in Korea Now That Mattis Is Gone? 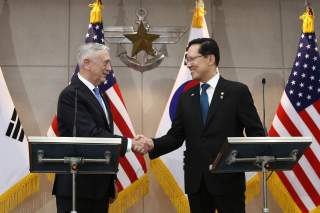 Next week, U.S. Secretary of Defense James Mattis will leave office. His position will be filled by an acting deputy. The U.S. Senate will eventually confirm his replacement. There is widespread concern that Trump is replacing his first generation of advisors and staff with a second generation selected for loyalty rather than competence. Mattis, like National Security Advisor H. R. McMaster before him, was often described as an “adult in the room,” in contrast to more unreservedly loyal advisors like the Sebastien Gorka or Jared Kushner.

There is deep anxiety, both in Washington and in allied capitals, that an underqualified Trumpist successor could wreak havoc on U.S. alliances given the critical importance of the defense secretary role. Mattis was indeed beloved by U.S. allies. He often sent traditional signals of alliance solidarity in the wake of Trumpian outbursts about allies free-riding on or ripping off America. I heard him speak at the 2018 Shangri-La Dialogue, and he received an extended ovation, almost solely for sounding traditional U.S. alliance themes in the age of Trump.

Much of the focus on Mattis’ departure has turned on the Middle East. It appears that Mattis is leaving primarily over Trump’s precipitous decision to remove U.S. forces from Syria. But Mattis’ abrupt resignation will also impact U.S. power in East Asia, where he has been a critical voice in stabilizing American relationships in an area bewildered by the populist upsurge in the West.

Mattis’s departure will matter less in Europe than Asia. Europe is going through a similar populist tumult as America. Brexit, Viktor Orban of Hungary, Andrzej Duda of Poland, the various radicals in Mediterranean governments like Italy and Greece, and so on have accustomed European allies to the kinds of social forces Trump is channeling. But in Asia, these sorts of populist explosions are rare. In democratic Asia, only Philippine President Rodrigo Duterte approximates Trump’s style. Elsewhere, in Japan and South Korea especially, Trump’s inconsistency and abuse have bewildered and alienated elites, who have taken to simply flattering Trump in response. In this confused environment, Mattis was a beacon of normality.

It is on North Korea that Mattis’ successor will arguably have the most impact. The contentious relationship with China is so broad-fronted and multifarious that many groups have vested interests in the outcome. Because of Korea’s smaller footprint and South Korea’s asymmetric defense dependence on the United States, the defense department plays a greater role. And here, Mattis was excellent.

Most importantly, Mattis was openly opposed to the various strike options discussed in 2017. As the op-ed pages were full of suggestions for giving North Korea a “bloody nose,” and as the president himself was throwing out language like “fire and fury” and “totally destroy North Korea,” Mattis was a voice of restraint. Trump had surrounded himself with hawks: UN Ambassador Nikki Haley, Vice President Mike Pence, McMaster, and Secretary of State Rex Tillerson were all fairly belligerent voices, as were McMaster and Tillerson’s successors. In that crowd, Mattis was the sole voice arguably consistently and aggressively for a negotiation track first.

Mattis also sent consistent signals to the South Koreans during this time that they would be consulted before any major military action might occur. Trump’s 2017 language was so harsh, that South Korean President Moon Jae-In felt compelled to publicly say to the national legislature a few days before Trump would speak there, that no one could attack North Korea without South Korea’s prior assent. The United States and South Korea have never agreed whose “permission” is required for any such action, and Mattis did an excellent job finessing that irresolvable issue throughout Trump’s extreme phase on North Korea.

Finally, Mattis sent similarly important signals to America’s South Korean ally that the relationship was greater than Trump’s transactional approach. Mattis made this concern plain in his resignation letter. He, like many, is deeply concerned that Trump is burning bridges with friends and partners by demanding that they “pay up.” Mattis never talked this way. He consistently used established language about the “iron-clad” relationship between Seoul and Washington. He never echoed Trump’s demand that South Korea pay more for the alliance, and it is likely that were he in charge of the current financial burden-sharing talks, that they would be wrapped up by now. Instead, they are deadlocked by Trump’s demand for more money from Seoul.

Most of these accomplishments were below the radar and negative rather than positive. That is, Mattis’ most important achievements were in stopping things from happening—a strike on the North with a possible slide towards war or a major alliance blow-up over financing. If Trump follows his practice elsewhere and replaces Mattis with a more supine loyalist, as with current National Security Advisor John Bolton or Secretary of State Mike Pompeo, America’s problems in Korea will likely multiple. For instance, the burden-sharing issue will grow to be the dominant issue in U.S. relations with South Korea. Regarding the North, a Trumpier successor may not restrain Trump from sliding back toward “fire and fury” when Trump finally realizes that North Korea has no intention of denuclearizing.

Mattis was a quiet manager. We’re all going to miss that soon.