What Happens When China Becomes the Most Powerful Country in the World? 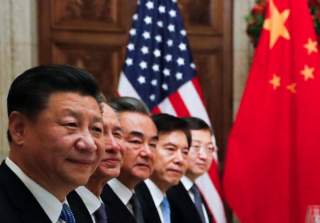 Globally preeminent states have a tendency to shape the world in many ways. Obviously, they do it in a rather direct manner through their geostrategic activities, but the phenomenon goes much further than that. On purpose or by accident, preeminent states export their internal arrangements to the entire international system. The global political, economic, social, cultural and legal effects of this process are profound.

British and then American global preeminence accounts for the fact that it is the English language that ended up the planet’s lingua franca, not French or German. Slave trade received an ultimately mortal blow in 1807, when philosophical and political developments within Britain resulted in its prohibition, and because it was Britain that had the naval strength to actually enforce the ban. The Western victory in World War One placed the democratic form of government at the forefront of the world’s political fashion, where it remains to this day. The implications of the totalitarian regimes’ potential success in their quests for hegemony during World War II or the Cold War are as clear as they are unpleasant.

Since the first half of the twentieth century, the US has left an enormous mark on the globalized world, which goes far beyond the obvious geopolitics. An incessant stream of political values, financial activities and sheer culture flowing from America has incalculable effects. The total sum of various manifestations of American influence has played a crucial role in shaping the modern world.

Today, America’s preeminence is challenged by China. To be sure, the two nations go to some lengths not to let their competition go quite out of hand and are economically interdependent. The essence of what is happening, however, is that China has become the second power in the world, and it wants to become the first. The United States, meanwhile, is not disposed to see itself replaced in its position of leadership.

There is nothing unusual about this situation. Struggle for preeminence has been going on, with only brief pauses, since the Early Modern age. During the later Renaissance and religious wars periods it was Spain versus France. From the late seventeenth century to the end of the Napoleonic Wars it was France against England and then Britain. For much of the nineteenth century it was Britain against Russia. In the early twentieth century—Britain against Germany. In World War Two—the United States against Germany and Japan. During the Cold War, it was the United States against the Soviet Union. Today it is the United States versus China.

This struggle is not necessarily destined to result in a direct war (although it might). After all, the Cold War didn’t. But whatever the forms the Sino-American competition is going to take, the stakes are incredibly high, and not just for the two contesting powers.

If China were to replace the United States in the role of global leader, then its internal reality would shape the outside world, just like that of Britain did and that of America still does. And right now, the internal reality in question is not pretty at all. In fact, China is in the process of transfer from the relatively mild authoritarianism (well, “mild” in comparison to Mao’s time) it has had since Deng Xiaoping to a new model that comes disturbingly close to the very definition of totalitarianism.

A key feature that differs a totalitarian model from an authoritarian one is that under totalitarianism it is not enough for citizens to just mind their own business and refrain from political opposition to the regime. Instead of being satisfied with their political complacency, a totalitarian regime demands strict adherence to its rules and ideas in people’s everyday lives, including in the matters that have nothing to do with politics. In effect, it seeks to control everyone’s every step.

This is precisely what the Chinese ruling regime is now working to achieve. Modern digital technologies offer it a possibility to build an actual dystopia in the sense until now only described in the science fiction—something totalitarian regimes of the past could not do for practical reasons. A new Chinese system relying on total surveillance and big data to notice and assess everyday actions of the citizens is set to become fully operational in 2020. It is already functioning, however. In just one of its manifestations, twenty-three million Chinese citizens have been banned from buying travel tickets for various actions in their lives that the system frowns upon.

If you are tempted to think that this new digital totalitarianism might be softer compared to the more technologically primitive regimes of the past, then take a look at Xinjiang. This large region of China has essentially been turned into one huge concentration camp in order to “transform” the culture of the local ethnic and religious minorities. In August 2018, one million of Xinjiang residents were reported to be interned in the camps. Others estimate the figure to be up to two million. And this policy of Beijing is set to continue. In fact, the number and total area of new security facilities in Xinjiang peaked in 2017 and 2018. The camps are claimed to have “re-education” purpose, but apparently torture is part of the curriculum.

Given the planned expansion of the total surveillance and behavior control system to all of China, the Beijing regime’s actions in Xinjiang might turn out to be a pilot project with potential for some degree of application beyond that unfortunate province. After all, the Chinese authorities already practice enforced disappearances, while simultaneously intensifying their crackdown on the human rights.

All these techniques of statecraft are really not something one would like to see becoming more widespread in the world. And yet, that would probably happen if China were to become the world’s preeminent great power.

In fact, this process has already started. In Cambodia, for instance, China’s influence empowers suppression of democracy by the local authoritarian regime. China’s surveillance practices are spreading beyond its borders. Among examples of this process is Zimbabwe’s decision to install Chinese-provided facial recognition and monitoring system throughout the country. Tanzania has adopted cybersecurity legislation that restricts freedom of internet content, resembling China’s model and helped by its technical assistance. So has Uganda. In Pakistan, a Chinese-run surveillance system has been established along the route of China-Pakistan Economic Corridor.

As stated in the Freedom House’s Freedom on the Net 2018 report, Chinese firms “provided high-tech tools of surveillance to governments that lack respect for human rights.” Freedom House counted eighteen countries where Chinese firms “are combining advances in artificial intelligence and facial recognition to create systems capable of identifying threats to ‘public order.’” Representatives from thirty-six nations attended seminars where Chinese officials were sharing their information management know-how. The notion of the internationally spreading Chinese “techno-dystopian” model, mentioned in the report, is now entering the wider public discourse.

If China were to lead the world, then democracy would be hard-pressed to remain the mainstream form of political regime it has been for the last century. Modern China’s political and legal norms and practices would closely follow the global spread of the Chinese geopolitical and economic dominance. That is why the ongoing competition between America and China will decide much more than just the great-power careers of these two nations. This competition is, in effect, a struggle about what kind of world we are all going to live in.

David Batashvili is an international relations analyst. He previously worked at the National Security Council of Georgia and is currently a research fellow with the Georgian Foundation for Strategic and International Studies.