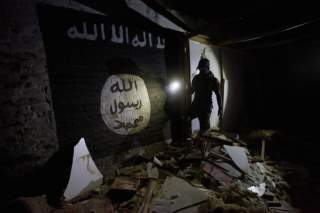 Overseas, Trump embraced the Saudi perspective of the Middle East. Saudi Arabia is an important counterterrorism partner, and relations with the Saudis became strained under Obama. Though Trump’s efforts to strengthen ties should be commended, the Saudi government continues to fund an array of preachers and institutions that promulgate an extreme version of Islam, enabling the Islamic State to recruit and otherwise gain support around the world. In addition, Saudi Arabia promotes an anti-Shia agenda that harms regional stability and fosters sectarianism, a key recruiting tool of the Islamic State.

Perhaps most troubling is how the president responded to the first significant jihadist attack on U.S. soil during his tenure—the October 2017 truck-ramming attack in New York City. At a time when a president should provide steady leadership, Trump (inevitably) began to tweet. He tried to turn the attack into a political issue, excoriating Sen. Chuck Schumer for the visa program that let the attacker into the country. He then stoked fears of immigration, called for the attacker to be sent to Guantánamo (and then apparently dropped that), and otherwise appeared erratic, partisan and lacking an understanding of the policy implications of his own words.

INSTEAD OF relaxing pressure as the Islamic State prepares to go underground, the United States must redouble its efforts. This will require crafting a sustainable coalition of local allies in Iraq and Syria that demands resources, skill and high-level engagement.

Training allied forces remains vital, but this must be understood as a limited solution rather than a cure-all. In theory, training allies seems a Goldilocks answer to many policy questions: it is relatively low in cost, it minimizes direct risk to U.S. forces and it helps reduce terrorism in the long term when newly capable allies can police their own territory. Yet, especially in the Middle East, these efforts often fail. Despite spending hundreds of millions on training programs in Iraq, Syria and elsewhere, U.S.-trained forces have often crumbled in the face of the adversary. Regime corruption, divided societies, politicized militaries and other problems plague the region, and U.S. training can only move the needle slightly. Limited progress is better than no progress, but other policies must supplement training programs.

To prevent the Islamic State from reestablishing itself in Iraq and Syria or spreading elsewhere in the region, the United States also must adopt a broader conception of counterterrorism, recognizing the link between jihadist terrorist groups and civil wars. Groups like the Islamic State exploit civil wars and worsen them: if civil wars in the Muslim world are left to rage, we can expect jihadist groups in the region to remain strong actors. Resolving civil wars is a strategic as well as a humanitarian imperative. Programs for conflict resolution and sustained U.S.-led diplomacy are vital to ameliorate the effects of civil wars.

Furthermore, the United States must also support allies on the front line, like Jordan, that are vulnerable to jihadist meddling. The United States must also strengthen nascent democracies that have a significant jihadist problem, like Tunisia. As such, the administration should rescind the proposed dramatic cuts to the already-small foreign-aid budget, and staff much of the Department of State, the civilian arm of the Department of Defense and other key agencies to strengthen the ability of the United States to use a whole-of-government approach to combating terrorism.

One significant problem is institutionalization. Since 9/11, the executive branch alone has executed counterterrorism policy, with some modifications by the courts. One branch of government, perhaps the most important in the long term, has been conspicuously absent under both parties’ leadership: the U.S. Congress. Under both Bush and Obama, new and controversial counterterrorism instruments—targeted killings, increased domestic surveillance, aggressive FBI sting operations, detention without trial and so on—moved to the center of U.S. counterterrorism efforts without significant congressional input. In addition, the United States is bombing the Islamic State in both Iraq and Syria with only dubious legal justification.

Defeating the Islamic State could be the marquee foreign-policy accomplishment of the Trump administration. Doing so, however, will require more than just forcing the caliphate underground. Instead, the administration must maintain pressure on the group in the Middle East, work with allies around the world and shore up efforts at home. Failing to do so will result in at best a respite, not lasting victory.

Daniel Byman is a professor and senior associate dean at Georgetown University’s Edmund A. Walsh School of Foreign Service and a senior fellow at the Brookings Institution’s Center for Middle East Policy.

Image: A view of Islamic State slogans painted along the walls of a tunnel near Mosul, Iraq, March 4, 2017. Reuters/Alaa Al-Marjani