What Happens When Yemen Collapses? 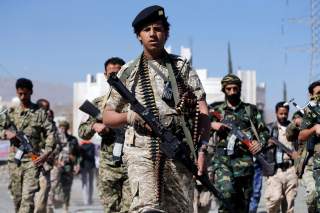 Turmoil in Aden over the past few weeks has underlined the existential crisis confronting Yemen. The alliances that have been at the center of the three-year-old civil war—the Hadi government and its Saudi-led coalition of supporters versus the Houthi alliance with former President Ali Abdullah Saleh—have fractured.

Moreover, as a number of recent studies have highlighted, the Houthi-Saleh assault on the Hadi government is only one aspect of a much more complicated story of Yemen’s splintered society.

With the conflict still stalemated and the UN-led political process frozen for the past eighteen months, Yemen’s survival as a unified country appears in doubt. Yet the international community does have a vital interest in ensuring that Yemen survives.

1. Require that Saudi Arabia and the United Arab Emirates re-state explicitly their support for a negotiated resolution of the civil conflict in accordance with UN Security Council Resolution 2216. The legitimacy of the Saudi-led coalition’s military intervention in the Yemeni conflict rests on that resolution, which calls explicitly for the reinstatement of the legitimate government under President Abed Rabbu Mansour Hadi in the capital of Sanaa.

Yet, for critical days at the outset of the crisis in Aden last month, the UAE appeared ambivalent over the outbreak of fighting between elements loyal to the Hadi government and the UAE-backed Southern Transition Council.

The transition council not only declared its opposition to the Hadi government, but it also advocated for the re-division of Yemen into two separate states, north and south. Although Emirati diplomats eventually partnered with their Saudi counterparts to bring an end to the fighting and restore order in Aden, rumors persist that the UAE is sympathetic to the goals of the southern secessionists.

2. Demand that the Hadi government do more to demonstrate its capacity to take on the responsibilities of governance. The Hadi government is not responsible for the frozen negotiation process, but it is responsible for the broadly held view among Yemenis that it has abdicated its responsibility in addressing the needs of the Yemeni population, which is now confronting one of the world’s worst humanitarian crises.

The government’s dysfunction has directly contributed to the clashes in Aden as an angry, frustrated population joined in the demands for a change of government leadership. Most egregious of the challenges confronting the Yemeni people is the collapse of Yemen’s economy, which has left millions of Yemeni families without the possibility of providing the basic necessities of life even as needed food, fuel and medicine are generally available in the market.

With billions of dollars injected into the Yemeni Central Bank by the Saudis, the government has the potential to immediately pay the 25 percent of Yemenis who receive public-sector salaries as well as distribute social welfare funds to the millions of other Yemenis dependent on the assistance. Many of them have not received any payments since the summer of 2016. While a functioning economy won’t bring an end to the conflict, it can alleviate much of the suffering of the Yemeni people.

3. Assert a clear vision for the resumption of political negotiations. The UN will soon appoint a new special envoy to Yemen, replacing Ismail Ould Cheikh Ahmed, who labored intensively but unsuccessfully for nearly three years to broker a political agreement between the warring parties. Under new leadership, the UN will have a fresh opportunity to revive the moribund talks.

While the international community has been generally supportive of the UN process, it has not intervened proactively or established clear parameters for what it would regard as a reasonable resolution. Thus, while there has been a regular dialogue with the Hadi government and its coalition partners, there has been little effort to pressure the Houthis or their Iranian backers to return to meaningful negotiations. In the meantime, a number of proposals have been put on the table to restructure fundamentally the nature of the negotiations. While well-intentioned, many of these proposals would add layers of complication, making a successful conclusion nearly impossible to achieve.

The Quint foreign ministers—United States, UK, Saudi Arabia, UAE and Oman—should articulate a clear strategy in support of the UN process that would signal to the parties and their partners international expectations of what would be an acceptable and achievable resolution of the core conflict.

Ending the fighting between the Hadi government and the Houthis will not bring an end to the Yemen crisis. Resolving all of the outstanding issues and stabilizing the country will require years of additional effort and engagement by the international community. But ending the fighting will provide an opportunity to revive the economy, address the humanitarian crisis, and restore essential government services for a population that has suffered enormously over the past three years. Achieving that goal must be a priority for the Trump administration and its partners.