What Has America Learned from Negotiating with Iran? 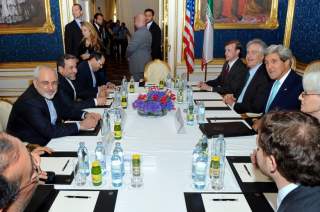 While negotiators from Iran, the United States and the rest of the P5+1 will not meet their July 20 target for a comprehensive nuclear agreement, it is clear they won’t walk away from the table in a huff. So, as the parties prepare to continue the process, what has America learned from negotiating with Iran, and what does it still need to learn to close a final deal?

One thing Washington has learned is that the Islamic Republic is deeply committed to protecting Iran’s independence. Thirty-five years ago, Iran’s current political order was born of a revolution promising Iranians to end subordination of their country’s foreign policy to the dictates of outside powers—especially the United States. Since then, the Islamic Republic has worked hard to keep that promise—for example, by defending Iran against a U.S.-backed, eight-year war of aggression by Saddam Hussein's Iraq and fending off a steady stream of U.S. and Israeli covert attacks, economic warfare and threats of overt military action.

On nuclear matters, the Islamic Republic’s commitment to protecting Iranian independence focuses on the proposition that Iran has a sovereign right, recognized in the 1968 Nuclear Nonproliferation Treaty (NPT), to enrich uranium indigenously under International Atomic Energy Agency (IAEA) safeguards. The Islamic Republic terminated the purely weapons-related aspects of the U.S.-supplied nuclear program it inherited from the last shah, going so far as to reconfigure the Tehran Research Reactor—which, when transferred by the United States in the 1960s, only ran on fuel enriched to weapons-grade levels (over 90 percent)—to use fuel enriched to just below 20 percent.

But the Islamic Republic has also been determined to develop a range of civil nuclear capabilities, including indigenous enrichment for peaceful purposes. It won’t surrender Iran’s right to do so—even in the face of massive U.S. and Western pressure and sanctions. Beyond sovereignty and practical needs, Iranian policy makers judge that appeasing Washington on the issue will simply lead to more aggressive U.S. demands and pressure on other disputes.

America may have begun to recognize that respecting Iranian independence is key to diplomatic progress. For over a decade, Washington has insisted—contrary to how the vast majority of states read the NPT and to America’s own publicly stated view during the Treaty’s early years—that Iran has no right to enrich. Even today, while Secretary of State John Kerry acknowledges Iran’s right to a “peaceful nuclear program,” the United States refuses to acknowledge that this includes a right to safeguarded enrichment.

However, when Washington has moved, in practical ways, to accept safeguarded Iranian enrichment, Tehran has responded positively. In the Joint Plan of Action agreed last November, America and its British and French partners dropped their longstanding demands that Iran cease all enrichment-related activities before substantial diplomatic progress would be possible. Furthermore, the United States and the rest of the P5+1 agreed that a final deal would encompass an Iranian enrichment program. In return, Tehran made multiple commitments to diminish what America and its Western partners portray as the proliferation risks of Iran’s nuclear activities. These confidence-building measures—which, the IAEA reports, Iran has scrupulously implemented—include stopping enrichment at the near-20 percent level needed for TRR fuel, converting part of its near-20 percent stockpile to oxide form and diluting fissile-isotope purity in the rest, freezing its centrifuge infrastructure and accepting IAEA monitoring well beyond NPT requirements.

While U.S. officials have started to grasp the importance of respecting Iran’s independence, they have yet to draw this insight’s full implications—the main reason a final deal isn’t at hand.

America and its Western partners continue demanding that Iran dismantle most of its safeguarded centrifuge infrastructure—a demand with no basis in the NPT or any other legal instrument and which contributes nothing to Western powers’ purported nonproliferation goals. Iranian Foreign Minister Javad Zarif has made clear that, in a final deal, Iran could agree to cap temporarily the scope and level of its enrichment activities and to operate its centrifuges in ways rendering alleged scenarios of rapid “breakout” implausible (e.g., no stockpiling of low-enriched uranium).

Unfortunately, Western demands for dismantlement appear grounded in a determination that Tehran must “surrender” in a final deal—to forego sustainable indigenous enrichment capabilities and instead rely on foreign fuel suppliers (especially Russia). If Western powers insist that Iran compromise its sovereign rights, there will be no final deal, no matter how long talks are extended.

The United States also still needs to learn—however incomprehensible this may seem to some—that the Islamic Republic is, in fact, a legitimate order for the overwhelming majority of Iranians living inside their country.

Besides restoring Iranian independence, the revolution that produced the Islamic Republic promised Iranians to replace externally imposed autocracy with an indigenously created system, grounded in participatory Islamist governance. For thirty-five years, this is what the Islamic Republic has offered Iranians the chance to build. With all its flaws, the Islamic Republic has delivered for its people in important ways, including impressive (and progressive) developmental outcomes in poverty alleviation, educational access, health-care delivery, scientific and technological advancement, and improving the status of women—despite decades of war, threats of war, and intensifying sanctions.

Still, many American elites persist in depicting the Islamic Republic as a system so despised by its own people as to be chronically in danger of overthrow—a fantasy that has driven Western enthusiasm and not-so-tacit support for regime change in Iran. Beyond its falsity, this misapprehension of reality continues to warp the Western approach to nuclear diplomacy with Tehran. Beyond dictating the “acceptable” scope of Iran’s indigenous capabilities, Western powers want the limits on Iran’s nuclear activities in a final deal to apply for well over a decade. Conversations with Western officials indicate that this demand—also with no basis in the NPT or any other legal instrument—is motivated by assessments that the Islamic Republic will not last for more than ten years. By insisting on a more-than-ten-year term, Western powers are calculating that, when a final deal expires, Iran will have a political order less committed to strategic independence.

This is both foolhardy and reckless. The Islamic Republic is not about to disappear—and no truly legitimate Iranian government will compromise what the vast majority of Iranians see as their nation’s sovereign rights.

When the United States fully understands that, the nuclear issue will almost resolve itself.

Flynt Leverett and Hillary Mann Leverett are authors of Going to Tehran: America Must Accept the Islamic Republic of Iran and teach international relations, he at Penn State, she at American University. Seyed Mohammad Marandi is professor of North American Studies and dean of the Faculty of World Studies at the University of Tehran.