What Has Become of Abdul-Salaam Ojeili's Syria 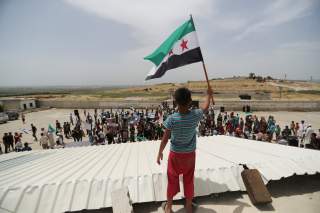 A BBC Panorama documentary released in December 2017 exposed a number of the scandals involved with the AJACS project but did not even address the larger issue of what purpose the program served. It was meant to be an alternative to both extremist groups and the Syrian regime, but the police were entirely disconnected from a legitimate governance structure and were really only accountable to their Western donors. The program was ended in 2018.

The last major mistake made by the Syrian opposition was to not understand that a functioning security apparatus is necessary for any governing authority, particularly in a society that has traditionally been ruled by authoritarianism and strict social codes that are being pulled apart. The opposition seemed to think that everyone supported them, and that no one would use force to impose a competing vision for the country. In reality, the Islamists exploited the chaos and took over opposition-held areas by force.

The Syrian opposition has ceased to exist as a political force inside the country. The protests of 2011 led to eight years of civil war, not to democracy and better governance as many hoped. Those who took control in the government’s absence seemed not to realize that their own society had fundamental issues that a governing authority must deal with: lack of proper education, religious extremism and sectarianism, entrenched interests and widespread corruption extending beyond the state, a president willing to do anything to stay in power and who had more popular support than people realized…the list goes on. If the Assad regime is to blame for these issues, then it does not make them any less real. Any hope for change in the country must be put in a plan that takes all these factors into account, rather than trying to sweep them under the rug and wish they did not exist.

Sitting in his clinic in Raqqa in 1955, Abdul-Salaam Ojeili saw a protest passing by of students in his city angry about some action taken by Israel. He appreciated the passion of the protestors and agreed with their sentiment, having volunteered to leave parliament and fight for the Palestinian side just a few years earlier, but he wanted to tell the students that today in Israel their counterparts were in school studying and getting one day ahead in their studies compared to those out protesting. He thought about writing a speech to deliver to them saying as much, but ultimately decided to continue his work as one of Raqqa’s only two doctors at the time, putting into practice what he was tempted to preach. Who knows what Ojeili would have thought had he lived to see the protests of 2011; he passed away in 2006. One imagines, no matter what he might have thought of the Syrian revolution, that those protesters from fifty years prior would have crossed his mind as his city devolved into chaos.

Samuel Sweeney is a former congressional staffer and is now a writer and translator based in the Middle East. He has a master’s degree in Islamic-Christian Relations from l’Université Saint-Joseph in Beirut.