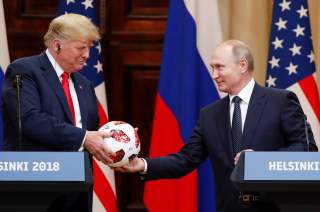 The Putin-Trump summit was nothing if not surreal. Even as President Vladimir Putin contentedly looked on, President Donald Trump spent a goodly portion of his remarks blasting the Mueller investigation, the Democrats, Hillary Clinton and “the server.” It was all “a witch hunt,” asserted the president of the United States, contradicting the findings of his own intelligence community and its director, Dan Coats. Russia’s president could not have agreed more.

When asked about the twelve Russian military officials whom an American grand jury had indicted, Putin simply stated that “the Russian state” had never been behind such behavior. It was all a rogue operation, and Putin kindly offered to have American officials personally witness the Russian investigation of those who had been indicted. Of course, he added, Russian officials should be made privy to the activities of the Mueller investigation; Trump thought that was “a great idea.” That Russian justice operates somewhat differently from that of the United States either did not occur to Trump or posed no serious problem for him.

Such was the tone of the press conference, and presumably of the one-on-one meeting of the two leaders. Trump said that American and Russian relations had turned a page; his predecessors had made a “terrible” mistake in treating Russia as an adversary. That George W. Bush had a glimpse into Putin’s “soul,” or that Hillary Clinton had called for a “reset” with Russia were of no consequence to Trump; it was only he who was turning over a new leaf in U.S.-Russian relations.

Trump spent much time emphasizing Washington and Moscow’s common interests—fighting terror, combating proliferation. He seemed to point to a potential agreement on Syria, which of course would involve both leaving Bashar al-Assad and his government in place, and abandoning America’s allies fighting the Damascus regime. He spoke of creating new vehicles for dialogue, both official and unofficial, and focused especially on business ties between the two countries, though he avoided the question of how such ties could be strengthened in the face of ongoing Congressionally-mandated sanctions.

Trump said virtually nothing about America’s allies. He did once again complain about Germany’s support for Nordstream II. Even then, however, he expressed understanding for Russia’s position as a competitor to America in natural gas production and acknowledged that Germany’s proximity to Russia made the new pipeline attractive to Berlin.

That Putin fared well at this summit is obvious. He ensured that Russia would be seen as America’s equal—a restored superpower on the world stage, an international player to be reckoned with. What Trump gained from this summit is somewhat more problematic because his objectives were unclear. He did not appear to seek to win political or security concessions from Russia. For example, he did not mention Crimea in his press conference; it was Putin who said that they disagreed on the issue, without indicating the strength of that disagreement. Furthermore, neither Trump nor Putin spoke of Russian support for the Ukrainian separatists.

Trump did voice his concern for Israel’s security, and in this regard, Putin echoed him. Indeed, Putin referred to a return to the status quo ante based on the 1974 Syria-Israel disengagement agreement. Neither man mentioned Hezbollah’s role in Syria, however. Nor did Trump have anything to say about Russia’s cooperation with Iran in supporting Assad’s survival.

Not surprisingly, the Helsinki Summit has left America’s allies and friends—with the possible exceptions of Israel, Jordan, and one or two other Middle East nations—in a state of confusion. It is not that Trump’s seeming willingness to accommodate Putin is without precedent; Franklin Roosevelt was guilty of far more when he met with “Uncle Joe” Stalin at Yalta. Yet, as Isaiah Berlin once wrote of Roosevelt, “He made the majority of his fellow citizens prouder to be Americans than they had been before. He raised their status in their own eyes—immensely in those of the rest of the world.” After this summit, can one say the same about Donald Trump?