What Hillary Clinton Doesn't Get about Donald Trump Supporters 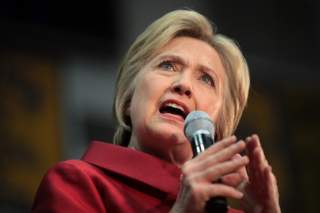 Speaking at a recent New York City fundraiser, Hillary Clinton suggested that her opponent’s supporters can be divided into two categories.

The first is a “basket of deplorables” – a group, she clarified, that is “racist, sexist, homophobic, xenophobic, Islamophobic – you name it.”

”The “other basket,” Clinton maintained, is characterized by five sentiments:

- "the government has let them down”

- “the economy has let them down”

- “nobody cares about them”

- “nobody worries about what happens to their lives and their futures”

- “they’re just desperate for change, regardless of “where it comes from”

The latter basket, Clinton assured, “don’t buy everything he [Mr. Trump] says.”  It’s just that Trump offers “hope that their lives will be different.” How so? “They won’t wake up and see their jobs disappear, lose a kid to heroin, feel like they’re in a dead-end.”

Clinton campaign spokesman Nick Merrill brushed off the controversy. The first basket, Merrill specified, was just an allusion to the alt-right.

The trouble with Merrill’s explanation is that Clinton herself was careful to note that the alt-right comprises only a small if growing percentage of the first basket. Clinton cited the fact that views of alt-right websites have skyrocketed from 11 thousand to 11 million – a remarkable jump, but one that hardly explains why a Republican nominee for President is polling over 40% nationally. Whether the alt-right are “irredeemable,” as Clinton suggests, is debatable, but she is correct in saying that “they are not America.”

The data lend support to some of Clinton’s other points as well:

- Anger at the federal government has in fact been a distinguishing feature of Mr. Trump’s base. A Pew survey found that 50% of Trump backers expressed anger at the government compared to just 6% of Clinton supporters;

Trump voters do report relatively high levels of economic concern regarding their personal finances; and A “hope gap,” to quote The Atlantic’s Andrew McGill, seems to divide Trump and Clinton supporters; two-thirds of Clinton backers expect that things will be the same or better for the next generation while 68% of Trump supporters believe they will be worse.

What is not clear from the data, to put it mildly, is the basis for Clinton’s distinction between the 50% deplorables and the 50% dead-enders. How does Clinton know that more than one in five likely voters are “racist, sexist, homophobic, xenophobic, Islamophobic – you name it”?

Clinton’s traveling press secretary offered one explanation. The alt-right movement is a “hate movement” and alt-right supporters “appear to make up half his [Trump’s] crowd when you observe the tone of his events.”

Let’s assume, for the sake of argument, that the alt-right is a hate movement. The Clinton campaign has evidence that half of Trump’s supporters at his events are also alt-right supporters and that the crowds at Trump’s events are representative of Trump voters generally? Color me skeptical.

Another explanation is that Clinton got carried away and committed a gaffe. The question then is what kind of a gaffe. Clinton’s remark doesn’t fit neatly into any one of Dan Amira’s taxonomy of gaffes.  Perhaps it was nothing more than a “glaring factual error gaffe,” though, it’s worth noting that while Clinton subsequently expressed “regret” for saying “half,” she did not explicitly retract the substance of the claim itself.

In this context, Clinton’s statement is intriguing, for it implies that the economic worries of the white lower class are both legitimate and distinct from the bigotry it supposedly harbors. In other words, Clinton is suggesting that half of Trump’s supporters have economic concerns that “we have to understand and empathize with,” but the other half are contemptible bigots unworthy of civil treatment.

How Clinton might have arrived at this conclusion is hard to understand. The white lower class may be an abstraction for Clinton’s classmates from Wellesley and Yale Law School, but it is a very real part of her own journey. During her “eighteen wonderful years” in Arkansas between 1974 and 1992, the state experienced an economic transformation that had decidedly mixed consequences for the state’s white lower class. As Ben F. Johnson argues in his historical account Arkansas in Modern America, 1930-1999, “the foundation of a modern economy characterized by rising manufacturing and shrinking agricultural sectors” brought unprecedented wealth to the state, but could not lift Arkansas from the bottom of national rankings in personal income and comparative rates of poverty. Racial tensions migrated from political to economic domains: “The enduring connivance between local agricultural department agents and county committees stacked with prominent landholders drove African Americans out of farming.”

As a feminist first lady with a sharp tongue, Clinton found herself on the receiving end of the state's resulting cultural and economic angst. Voluminous biographies of Clinton as well as her own writings and reflections on the period are replete with anecdotes of culture shock and a discomfort that at times bordered on elitist contempt. "Political considerations," she later admitted, caused her to abandon her maiden name and temper her other “strange Yankee ideas.”  But she never entirely let go of her judgmentalism toward the white lower class culture that defined the state. Arkansans she urged, must “quit making excuses and accept…the challenge of excellence.”

Whatever Clinton may have concluded about the white working class, it is difficult to believe, against this backdrop, that Clinton sees no relation or overlap between this group’s economic challenges and its alleged prejudices. Surely Clinton sees some connection between the erosion of America’s manufacturing base and the consequences of large-scale immigration, for example, and the insensitive remarks that Trump’s predominantly white working class base makes at times on issues of identity politics?

It’s a complicated issue and available data paints an ambiguous picture. Gallup economist Jonathan Rothwell’s study found that Trump supporters in the GOP do have more protectionist views on trade and immigration compared to other Republicans. Perhaps counterintuitively though, they are also “at least as affluent as other Americans.”  Racial and cultural isolation is “robustly predictive” of support for Trump, but, this is hardly dispositive of the charge that Trump supporters are “racist” or “xenophobic.”

In a mature political discourse, Clinton might be asked to elaborate on these issues. More likely, Clinton’s opponents will continue to pounce in pursuit of partisan advantage. Clinton’s donors at the Cipriani Club – unaware of their latent snobbery and all-too comfortable with lumpist smears – will double down in her defense. The trope of the racist Republican will absolve them of serious reflection on Americans they know or care little about.

Hard questions about America’s identity and the fate of those disenchanted with the status quo will have to be litigated another day. Not that Clinton, who has already exhibited her elitist disdain for the white working class, will care.

Pratik Chougule serves as Managing Editor of The National Interest.