What Homer's Iliad Tells Us about a U.S.-China War 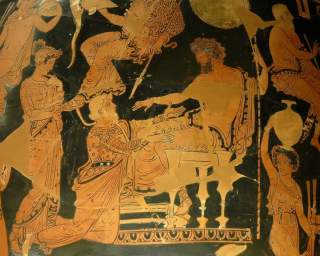 Despite its status as one of the oldest works of literature in the Western canon, Homer’s Iliad boasts enduring relevance. Though it recounts the legend of the Trojan War, it has three key lessons to teach the American strategist who seeks to navigate the Asia-Pacific region.

The Asia-Pacific is experiencing a period of strategic flux in which China is attempting to erode American primacy. War is not likely in the short term, but the risk of conflict will grow if Beijing continues its economic and strategic trajectory. While the region and the world will look to leaders in both countries to mitigate the effects of strategic competition, The Iliad has something to teach us about what may prompt a regional conflict, the risks entailed in seeking to prosecute such a war and how the contest could be resolved.

Homer’s compatriot, Thucydides, in his History of the Peloponnesian War, famously suggested that fear initially drove Athens to expand its empire, while honor and interest followed afterwards. The Iliad, however, highlights that honor can be the primary driver of conflict.

The Greeks were driven to an amphibious invasion of Troy to satisfy honor. Paris, a Trojan prince, stole Helen from her husband, Menelaus. Agamemnon, leader of the Greeks and Menelaus’ brother, vowed to bring her home. To satisfy this point of honor, he risked the lives of his men, his allies and his own power. By any reasonable standard, this was a disproportionate response. To be sure, Agamemnon would also have been attracted by the prospect of glory and riches, but the loss of Helen and the desire to retrieve her was the casus belli.

Such a course of action may be more readily understood when committed to by an ancient society, but honor still drives nations to take disproportionate risks. This is the first lesson the American strategist can draw from The Iliad. Consider, for example, China’s actions in the East China Sea. Beijing is trying to redraw its maritime borders, running the risk of a severe miscalculation that could escalate to a devastating great-power war with Tokyo and Washington. Running such a risk in order to acquire a few paltry rocks, even with the potential natural resources bonanza that possession of the Senkaku/Diaoyu islands may bestow, seems irrational if one does not consider the motivating power of honor.

One of Beijing’s key motives is to redress its century of humiliation, dating from the First Opium War in 1839 to the founding of the modern People’s Republic in 1949. This era saw China humbled as it was carved up and dictated to by Japan and Western powers. By refusing to acquiesce to Japanese and American desires to return to the pre-existing status quo vis-à-vis the Senkaku/Diaoyu islands, Beijing wishes to be seen as a great power that can shape its strategic environment in a way it could not during the slow collapse of the Qing dynasty.

This drive to regain national honor cautions us that just as the Greeks went to war because of an upset husband, Beijing may choose to wage war in order to satisfy national honor and avoid what it views as submitting to the same foreign powers responsible for its century of humiliation. When responding to and attempting to shape Chinese behavior, Washington and Tokyo should be cognizant of the influence that preserving national honor may exert on Beijing.

While the risk of war between the United States and China is low, The Iliad also has wisdom to impart, should conflict develop in Asia. Homer’s poem recounts a few weeks in the final year of the war. By this stage of the conflict, the Greeks have spent almost a decade at war. In an era before satellite phones and email, characterized by short life expectancy and the ever-present danger of a grisly death, the Greek warriors have spent a significant proportion of their lives fighting in a foreign land.

As a result of facing such hardships, their morale is low, and they often voice a desire to return home. In one passage, Homer tells us that Agamemnon, attempting to test his troops, bemoaned the cost of the fighting and the difficulty of conquering Troy. Having offered his men the opportunity to return home, he is shocked when they embrace it:

They cried in alarm and charged toward the ships

and the dust went whirling up from under rushing feet

as the men jostled back and forth, shouting orders—

“Grapple the ships! Drag them down to the bright sea!

Clean out the launching-channels!” Shrill shouts

Agamemnon’s troops would have deserted him had Odysseus not persuaded them to continue the struggle. Nevertheless, this hints at the difficulty of projecting and, even more importantly, sustaining power far from one’s homeland.

The Trojans, in contrast, do not enjoy the luxury of retreat. In a particularly moving passage, Hector, a prince of Troy and its finest warrior, returns to his wife and child after a day of fighting. He finds his wife, Andromache, terrified that he will be killed and she will be taken to Greece as a slave, giving us a glimpse of the consequences of defeat:

. . . it is less the pain of the Trojans still to come

that weighs me down, not even of Hecuba herself

or King Priam, or the thought that my own brothers

may tumble in the dust, crushed by enemies—

That is nothing, beside your agony

when some brazen Argive hales you off in tears . . .

The lesson for Washington is clear. If asked to fight a great-power war in Asia, the average American, tired of wars in Iraq and Afghanistan and eager for nation-building at home, will likely struggle to understand why more American blood and treasure must be sacrificed to support goals so far from home.

Should a Sino-American conflict break out, America would at least enjoy the option of returning home across the Pacific. China, however, would not. This would ensure that the result of the conflict would matter more to China. Its vital interests would be more likely to be at stake; it could, therefore, be expected to be willing to make greater sacrifices in order to prevail. When faced with future Sino-American crises, U.S. strategists should bear this in mind. U.S. leaders should not assume that the Chinese will concede, even if faced with the prospect of going to war against Washington.

In the event of a Sino-American war, The Iliad has one final lesson to teach. Throughout the fighting described in the poem, the advantage seesaws between the Greeks and Trojans. At one point, led by Hector, the Trojans gain the upper hand and force the Greeks back to their ships. Before the Trojans can annihilate their invader, however, darkness falls.

Hector gathers his troops and orders them to rest and feast to restore their strength:

Then all night long till the breaking light of day

we keep the watch fires blazing, hundreds of fires

and the rising glare can leap and hit the skies,

so the long-haired Achaeans stand no chance tonight

to cut and run on the sea’s broad back. Never,

not without a struggle, not at their royal ease

are they going to board those ships! No, no,

let every last man of them lick his wounds—

a memento at home—pierced by arrow or spear

as he vaults aboard his decks. So the next fool

will cringe at the thought of mounting hateful war

As Clausewitz would counsel, Hector is seeking the decisive battle, one that will afford him the opportunity to destroy his enemy, deterring future attacks on Troy. This, however, proves to be a fatal error.

Had Hector allowed his enemy to withdraw, he would have restored the prewar status quo, ending the war on terms favorable to Troy. True, this decision would have allowed the Greeks to return home, rebuild their strength and perhaps return to attempt to raze Troy in the future, but it would also have afforded Troy an opportunity to rebuild it defenses. Having prevailed once, the Trojans would have been confident of doing so again if the Greeks returned.

The lesson here for Washington is that in a conflict with China, America should pursue the limited aim of a return to the pre-existing status quo as quickly as possible. Should China seek to alter the status quo by attempting to conquer Taiwan or take control of the Senkaku/Diaoyu islands, Washington’s goal should be to evict the PLA without escalating the war by, for example, attacking the Chinese mainland.

While this may be difficult—any mainland-based assets used to strike U.S. or allied forces will be tempting targets—it would be easier to de-escalate the conflict if Beijing does not feel that it faces an existential threat. Washington should leave open a door for China to exit the conflict with honor, perhaps even with the ability to claim victory, much as it did after its disastrous invasion of Vietnam in 1979. This will increase the odds of the war being concluded on terms favorable to the present regional order.