What I Saw in Hong Kong 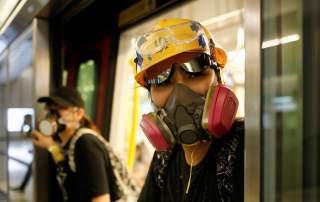 I spent July in Hong Kong. It’s a regular part of my year, as the director of an international program for undergraduate students. But this summer the city was immersed in protests. And I witnessed something inspirational, disquieting, and foreboding. I saw people fighting for the character of their country.

Hong Kongers have been protesting since the introduction of an extradition bill which would have allowed citizens, residents, and potentially visitors to be sent to China for trial. The public reaction was as immediate as the implications were recognizable. Under that bill, political dissenters could be handed over to a regime which dubiously defines crimes and where prisoners are made to commit suicide. In the face of such a reality, two million of Hong Kong’s seven million came out in protest.

Though the bill has been suspended, protests have continued for eleven straight weeks. In part, this is because there is an important distinction between “suspended” and “withdrawn.” A suspended bill can be ushered through more rapidly than new legislation subject to normal procedures. Anyone who studies politics knows this is how things are done—wait until people become complacent, and then pass legislation in the quiet of the night.

But the protests have become about more than the extradition bill as Hong Kongers are now fighting for self-government.

Many locals explain the reason for the protests simply as “we do not want to be China.” In 1997, Hong Kong agreed to leave Britain and become part of China if it could maintain a democratic regime and a separate judiciary. Hong Kong has long had its own institutions, intuitions which have cultivated a culture distinct from that of mainland China. They do not even speak the same language.

The tension between the two peoples is palpable, especially as there has been an influx of mainlanders to Hong Kong and many undergraduates maintain isolated social circles. Mainland students frequent neighboring restaurants where owners only communicate in Mandarin, rather than the local Cantonese, while Hong Kongers grow more concerned their language is being subverted.

China also interferes in—and influences—elections in Hong Kong. This leaves Hong Kongers feeling as if they are being forcibly governed by a foreign entity. The extradition bill would have intertwined Hong Kong’s judiciary with China’s, which obeys the party’s whim rather than law and procedure. The Hong Kong people refused to allow their judicial system to be diminished like their electoral system. China threatened Hong Kong’s animating principle: the rule of law.

Who are the Protesters?

On a sunny afternoon in Hong Kong, I observed people of all ages gathering in protest. Mothers were carrying their children, and the shops lining the street were open. Drifting from a loudspeaker was the protesters’ mantra: “Do You Hear the People Sing.” The opening lines reverberated through the streets like a pulse: “Do you hear the people sing? Singing a song of angry men? It is the music of a people who will not be slaves again!” The atmosphere was energetic, lively, and serious.

As darkness descends, the crowds become dominated by young people. They are bolder and have less to lose, while some say previous generations favor stability over democracy.

However, older Hong Kongers are showing their support in other ways. Anecdotes featuring elderly heroes are swirling around Hong Kong. A restaurant owner invited protesters to disguise themselves as customers to dodge police. More financially secure, the middle-aged are leaving clothes at train stations so young people can shed their identifiable black attire before going home. These clothes are also placed alongside money and train tickets which enable a quick exit without the use of personal and traceable cards. Yet, it is unclear where the public opinion of older generations will ultimately fall as they continue to watch their children being tear-gassed.

The actions of protesters also give insight into their character. On July 1, the anniversary of when Hong Kong was handed over to China, protesters stormed the Legislative Council and vandalized the building. Yet they left money for drinks they consumed, refusing to be petty looters. They also did not touch the priceless art housed in the building. The protesters protect what is most valuable to Hong Kong.

In large part, the marches are nonviolent. Of course, there are instances which are deserving of blame. That’s not surprising of a leaderless movement which includes at least two million people. The government has also not responded to their demands, causing the protesters to become more desperate. If the very character of your regime was at stake, where would you draw the line?

Concern for police conduct has metastasized itself in the protests. Officers have been using tear gas and rubber bullets liberally. Moreover, on the day protesters targeted the Legislative Council, the police curiously withdrew. Many in Hong Kong speculate this was a trap—that the police were hoping protesters would finally cross the line and subsequently lose the force of public opinion.

But the most critical shift in the dynamic between the police, protesters, and the public happened on July 21. That day, protesters, in what was taken as a challenge to Beijing, spray-painted the Chinese Liaison Office and threw paint over the building’s emblem, a symbol of China’s power over Hong Kong. The response was swift. Hours later dozens of alleged triad gang members clad in white appeared in Yuen Long station, which is located in the region closest to China. Armed with steel bars and wooden rods, they targeted those clad in black but also indiscriminately assaulted passengers in the station.

The police were absent, did not respond to emergency calls, and even shut their doors as the violence ensued. Many Hong Kongers, in disbelief, voiced sadness and despair at being abandoned by their protectors. Others reacted with the disdain and anger felt towards those who have betrayed their own people.

When I asked locals the reason for the police’s behavior, most just shook their heads mournfully, at a loss for words. The best explanation I received is that Beijing learned from the Umbrella Movement of 2014, sit-ins which promoted democracy, and began propagandizing the training of Hong Kong police.

The police claimed their resources had been depleted by earlier protests. Hong Kongers balked at this justification. Indeed, the Hong Kong police force is formidable and well-organized. On a night during which protesters changed direction and were scattered in multiple locations, in approximately an hour I observed over thirty police buses a block away from protests. There is some disconnect when the police are able to deploy that level of force but could not muster a presence in Yuen Long.

In the days that followed, protesters brazenly announced marches in Yuen Long and near the Liaison Office. A plastic cover appeared over China’s emblem and two-meter high water barriers barred the doors. The same barriers cropped up at entrances of police stations throughout the city. The lines have been drawn.

Since Yuen Long, clashes between the police and protesters have escalated. The police are contemplating deploying water cannons with tinted water so protesters can be identified long after they have been sprayed. Meanwhile, protesters are vying for the attention of the international community. Recently, departing and arriving flights were canceled as protesters descended on the airport.

But the protesters face an opponent more formidable than the police. China is tightening its grip on what is a valuable region. Beijing has reaffirmed its support for the police and Chief Executive Carrie Lam. They have also reminded the world it is within their authority to deploy the People’s Liberation Army to Hong Kong.

Hong Kong is a bastion of not only economic freedom but human freedom in Asia. I am not qualified to recommend the best means for supporting them. Yet echoing in my mind is a line from the protesters’ manta: “Who will be strong and stand with me?”

Brenda Hafera is the director of an international program for undergraduate students, based in Hong Kong.