What If America Assassinated Kim Jong-un? 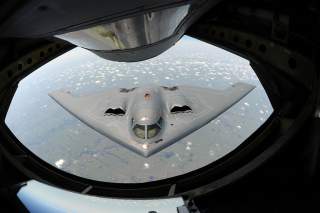 When the first images of a sarin gas attack streamed into the White House Situation Room, President Donald Trump ordered his National Security Council to come back to him the next day with some concrete options. Defense Secretary James Mattis, National Security Adviser H.R. McMaster and Joint Chiefs of Staff Chairman Joseph Dunford did just that; after rounds of meetings with national-security principles, President Trump ordered the U.S. Navy to launch fifty-nine cruise missiles on an Assad regime airbase where the gas attack originated.

Image: A U.S. Air Force B-2 Spirit bomber aircraft approaches the rear of a KC-135 Stratotanker aircraft before refueling during a training mission over the Midwest in August 2013.​ Flickr / U.S. Department of Defense / Airman 1st Class John Linzmeier​.