What If America Can't Compete with China for Asia? 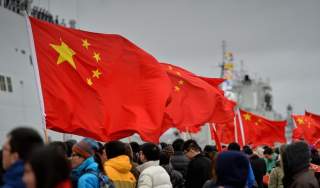 Among the central challenges for any policymaker is to ensure that short-term disturbances do not take his or her attention away from longer-term currents—a difficulty that is heightened in an era of social media.  A case in point is the furor over President-elect Donald Trump’s conversation with Taiwanese President Tsai Ing-wen. Observers across the world are pronouncing forcefully and definitively on the impact it will have U.S.-China relations when, in fact, several hypotheses are plausible. Gideon Rachman ventures that Mr. Trump’s decision may “eventually be dismissed as an early misstep…[that] will have no lasting significance”; at the other end of the spectrum, he notes, it may precipitate “a fresh confrontation between the U.S. and China over Taiwan.” Gordon Chang, meanwhile, believes that Mr. Trump has “not ‘reset’ Washington’s relations with China but put them on an entirely new footing....Trump, by seemingly not caring about Beijing’s reaction, has cut China down to size, telling its autocrats he does not fear them.”  A more banal prediction is that, like his eight predecessors, Trump, too, will pursue some variant of “engage but hedge” once he assumes office.

It is difficult to predict which of these hypotheses will prove correct. But the Trump-Tsai call should not distract observers from a fundamental structural reality that is crystallizing: recent developments are weakening the delicate balance that has helped circumscribe strategic competition between the United States and China in the Asia-Pacific, the nerve center of world order. China’s neighbors have thus far increased their diplomatic and military relations with the United States while boosting their trade and investment ties with China. To observers who feared that U.S.-China relations in the Asia-Pacific were constrained to being zero-sum, this arrangement seemed to furnish a compelling interim fix: it accommodated a reinvigorated U.S. role in the world’s most consequential theater, a resurgent Chinese position therein, and a desire on the part of China’s neighbors to postpone for as long as possible a wrenching “choice” between the two giants (a Cambodian proverb holds that when the elephants fight, the ants get crushed).  While this complex dynamic has yet to reach its expiration date, it is coming under growing strain.

Strategic Perturbations in the Middle East and Europe

When the Obama administration formally announced the rebalance in January 2012, the Middle East’s ongoing disintegration was only in its nascent stages, and concerns about European cohesion were considerably less intense. Five years later, the seeming promise of the Arab Spring has birthed four centers of upheaval—Iraq, Libya, Syria, Yemen; an Islamic State that has proven far more formidable than Iraqi and Syrian forces had initially believed; and the worst refugee crisis of the postwar era. According to the new Arab Human Development Report, despite containing just five percent of the world’s people, the Arab world accounted for 68.5 percent of its “battle-related deaths” in 2014. Meanwhile, Russian revanchism and resurgent populism have amplified the European Union’s extant woes, including anemic growth and demographic decline, with a growing number of observers calling into question the sustainability of the transatlantic project.

Given the extent of chaos across the Levant and disunity within Europe, it is considerably harder today than it was five years ago for the United States to argue that it should reapportion its strategic equities towards the Asia-Pacific. If America’s allies conclude that it lacks the strategic bandwidth to prioritize the region, they will be more likely to discount its reassurances; and if reality bears out their anxiety, they will be less capable of challenging China’s strategic preferences.

China has become steadily more capable of influencing its neighbors’ strategic calculus. In the Asia-Pacific, it is the largest trading partner for Australia, Hong Kong, India, Japan, Malaysia, Myanmar, New Zealand, Russia, South Korea, Taiwan, Thailand and Vietnam. Bloomberg reported this July, moreover, that “it was the largest trading partner for seven ASEAN members last year and had surpluses with eight.”

While many of China’s neighbors worry about the pace of its military modernization and the assertiveness it has been displaying in the East and South China Seas, none of them can afford to participate in a U.S.-led undertaking that either opens with or morphs into containment. As the New York Times observed recently, they “fear they could soon face a stark choice among money, pride, and place: accede to China’s security demands, or lose access to China’s vast market.”

The Collapse of the Trans-Pacific Partnership

While the rebalance was announced as part of a Pentagon document, the Obama administration appreciated early on that growing diplomatic and military partnerships in the Asia-Pacific would be contingent upon a stronger economic foundation in the region. Speaking in Tokyo on November 14, 2009, roughly two years before then-Secretary of State Hillary Clinton wrote her influential essay “America’s Pacific Century,” President Obama announced that the United States would engage “with the Trans-Pacific Partnership countries with the goal of shaping a regional agreement that will have broad-based membership and the high standards worthy of a 21st century trade agreement.” Secretary of Defense Ashton Carter stated last April that “passing TPP is as important to me as another aircraft carrier. It would deepen our alliances and partnerships abroad and underscore our lasting commitment to the Asia-Pacific.” Australia, Japan and Singapore have been especially vocal in warning that a failure of the TPP to win Congressional approval would undermine America’s perch in the region. That agreement would have covered twelve countries and a remarkable forty percent gross world product, and China had expressed growing interest in joining negotiations.

With the TPP’s failure, China is now in a far better position to accelerate Asian-Pacific economic integration on its own terms. Among the central planks of that effort are its alternative to the TPP, the Regional Comprehensive Economic Partnership, to which even longstanding U.S. allies are now flocking; and its flagship initiative, “One Belt, One Road,” which will supply vitally-needed infrastructure to the region and help locate China at the center of an emerging Eurasian economic zone.

The net of the aforementioned phenomena is that China is increasingly poised to advance a geoeconomic strategy that draws America’s allies into its strategic orbit. It behooves Mr. Trump to propose fresh economic offerings to the Asia-Pacific, not with the intention of eclipsing those that China has put forth, but of supplementing them: the richer the set of bilateral and multilateral trade and investment agreements China’s neighbors have to choose from, the more likely it is that the United States and China can restore the tenuous equilibrium that has allowed the ants to form a buffer between the elephants.

If the United States proves incapable of competing with China economically in the Asia-Pacific, it may feel greater pressure to constrict China’s resurgence, a decision that would inject enormous instability into a region already fraught with strategic risks. And, as James Fallows explains in a new essay, the depth and multiplicity of U.S.-China interdependence would render the adoption of containment a fateful choice for the world: “the U.S. and China have become so intertwined economically, and so constructively collaborative in a range of scientific, environmental, academic, and even diplomatic spheres, that almost any measure that would ‘punish’ China would necessarily also damage the United States and much of the rest of the world.”

Mr. Trump’s task is to avoid the impulses of disengagement and containment, and instead impart new momentum to an Asian-Pacific configuration that permits the United States to balance competition and cooperation.