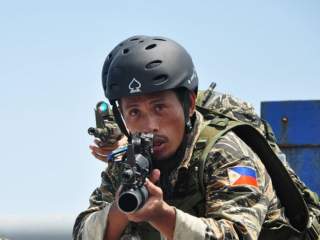 When Vasco da Gama, the famous Portuguese explorer, landed on the west coast of India in 1498, his armed galleons intercepted foreign vessels and confiscated their goods, justifying their actions by arguing the “common right to all to navigate the seas. . . does not extend outside Europe.”

More than five hundred years later, the Chinese appear to be taking a similar approach to foreign fishing vessels they deem to be infringing upon their territory—namely, 90 percent of the South China Sea they claim under their nine-dash line, or infamous “cow’s tongue.” In recent months, Chinese coast guard vessels and fishing boats seem to have stepped up their presence in waters also claimed by Indonesia, Malaysia, the Philippines and Vietnam.

Now I’m not sure how those foreign vessels responded to Portuguese aggression five hundred years ago, but these days, if you are a fisherman, retaliation is typically limited to whatever is on hand. An incident last Tuesday at Scarborough Shoal (known in China as Huangyan Island) in the South China Sea saw Philippine fishermen brandishing machetes and throwing rocks and firebombs at Chinese law enforcement vessels, after they had been struck by bottles hurled from China’s coast guard ships. China claimed to be defending its maritime waters from Filipino poachers, near territory it seized after a three-month stand-off with the Philippine coast guard in 2012. Chinese naval presence has grown around the shoal in recent weeks, with Navy chief Admiral John Richardson suggesting that heightened activity by the Chinese at Scarborough Shoal may be a precursor to the “next possible area of reclamation.”

While Filipino fishermen seem ready to defend their fishing rights with rocks, firebombs and machetes, the Philippine government is taking a more formal approach—seeking a court ruling from an international tribunal under the Permanent Court of Arbitration in The Hague.

This would appear to be the more sensible means of challenging China’s claims to the Scarborough Shoal (and other areas both claimed by the Philippines and China) under the 1982 United Nations Convention on the Law of the Sea; a ruling is expected in late May or early June. Yet if a ruling goes against the interests of China, Beijing will likely ignore the verdict (despite being a signatory to the 1982 Convention) and may continue to create artificial islands, send its fishing boats to disputed waters or declare a South China Sea exclusion zone.

An adverse ruling against Beijing will, however, prove to be a loss of face, and may give the United States more justification to back its treaty ally, the Philippines. American forces are already moving into the region in advance of the ruling, having just obtained access to five Philippine military bases, including an airbase on Palawan, in close proximity to the disputed maritime waters. If the ruling goes against Beijing and they decide to escalate the conflict, their aggression will only lead to a greater presence by the U.S. military, ostensibly in the enforcement of the “common right to all to navigate the seas,” and increase cooperation among the militaries of the United States, Southeast Asia and Japan.

Da Gama would have found this situation familiar. In the Lusiads, the Portuguese national epic which fictionalizes da Gama’s voyage to India, the famed explorer is detained by a king who is convinced that the Portuguese are not traders, but pirates. “Thy life, long roving o’er the deep, I know,” he says to da Gama; “A lawless robber, every man thy foe.” A Chinese escalation, in defiance of a ruling from the Hague, might leave the neighbors with similar feelings.