What Impeachment Really Reveals About Ukraine 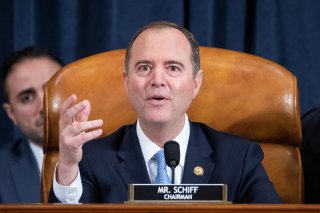 There was something more than a little troubling about the initial day of the first public impeachment hearing since the 1990s. House Intelligence Committee Chair Adam Schiff (D-CA) is filling the same role he performed under the previous Mueller investigation: convict at all costs. Already the third word out of the chairman’s mouth during his opening statement was none other than—what else?—Russia.”

With Schiff as impresario, a sickly miasma of unreality thus quickly enveloped the hearing. It came to resemble a morality play more than an impartial examination of President Donald Trump and Ukraine. On the one side was the virtuous Ukraine, an ally of America that had been wantonly abandoned by President Trump. On other side was a malignant Russia out to extirpate freedom not only in Europe, but potentially the rest of the free world. Or so at least both Schiff’s and William B. Taylor’s opening statements would appear to suggest. Schiff declared that in invading Crimea, Russia was trying to “fulfill Vladimir Putin’s desire to rebuild a Russian empire.” Was it? Or was it reacting to the sudden toppling of the Yanukovych regime in Kiev in February 2014 and trying to show that it would not take it lying down?

Then there was Taylor. According to Taylor, “the security assistance we provide is crucial to Ukraine’s defense and to the protection of the soldiers I met last week. It demonstrates to Ukrainians—and Russians—that we are Ukraine’s reliable strategic partner. It is clearly in our national interest to deter further Russian aggression.”

Maybe so, but how is that best accomplished? Is it better to pursue a modern-day version of détente with Russia, as Trump seems inclined to do, or is it better to engage in a standoff with Moscow? Taylor seems to believe that it’s not even permissible to debate this issue. What’s more, Taylor puts the onus on Washington to prove its bona fides to Kiev rather than the reverse. It’s quite remarkable that Trump should have to display his credibility to Ukraine instead of it showing him that there is a benefit to America assisting a country that has been riven by blatant corruption, infighting and intrigue for decades.

The ostensible focus of the congressional inquiry is a phone call between President Trump and Ukrainian President Volodymyr Zelensky, and the president’s withholding of aid to elicit an investigation into the Biden family’s business connections. The facts are known; there’s no smoking gun waiting to be uncovered. The forthcoming testimonies from diplomatic officials were already provided last month, and their substance ceremoniously leaked to sympathetic media outlets. There will be no surprise witness or shocking revelation to be had during the public testimony.

“While the founders did not intend that impeachment be employed for mere differences over policy, they also made impeachment a constitutional process that the Congress must utilize as necessary,” said Schiff. If today didn’t add anything, it did prove something: much of the case for impeachment is built on policy, not personal action.

For his part, Taylor devoted a significant portion of his testimony to reiterating the putative duty the United States has to support Ukraine. In Taylor’s narrative, the February 2014 coup against the democratically elected government was wholly organic, with no outside support or organization. He referred to the vote after Crimea’s occupation as a “sham referendum at the point of Russian army rifles.” A new, free vote ought to be held following the requirements of internationally recognized observers, but this is not a hostage situation. Finally, Taylor said Russian President Vladimir Putin is “[generating] illegal armed formations” and forming “puppet governments” in the Donbass. In fact, there is a significant minority of Ukrainians unhappy with the ouster of Viktor Yanukovych who wish for closer relations to Russia than the west. In fact, the self-declared eastern republics requested a union with Russia similar to Crimea’s, and Putin refused.

“Candidate Trump had made a statement saying it was possible that he would allow Crimea to go back to Russia. He expressed the sentiment, or the opinion, that it was possible Crimea wanted to go back to Russia. What I can tell you Mr. Nunes, that sentiment is amazingly inflammatory to all Ukrainians,” Taylor said later. Is it verboten to suggest a majority of a predominantly Russian area wants to remain a part of the Russian state?

As it happens, western Ukrainians don’t always seem as desperate for Western support as Taylor and Kent make it appear. As the trade war between the United States and China has intensified in the past year, Ukraine has made it a priority, as Dimitri Alexander Simes, Jr. reports, to court “multibillion-dollar investments from China as part of its effort to join Beijing’s One Belt One Road Initiative.” This includes aiding the modernization of the Chinese military, which is hardly in America’s national interest. But when it comes to assessing Ukraine, somehow that doesn’t seem to figure into the calculations of Schiff and Taylor. Expect more of the same as the hearings continue.